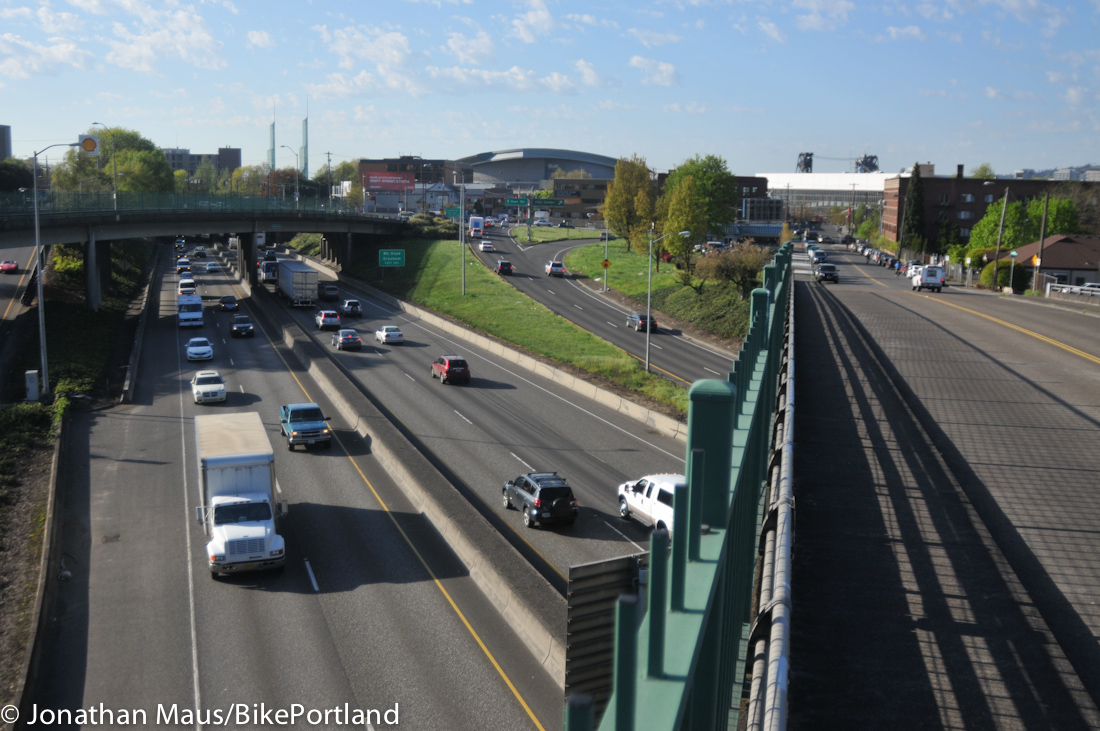 After years of back and forth between the City of Portland and the Oregon Department of Transportation on the plan to widen I-5 at the Rose Quarter in Portland, a negotiation may be back on the table. At today’s Portland City Council meeting, the city will adopt an intergovernmental agreement (IGA) with ODOT to provide the state transportation agency with planning and design services for the controversial project.

In July 2020, the Portland City Council, led by Portland Mayor Ted Wheeler and then-Portland Bureau of Transportation head Commissioner Chloe Eudaly, pulled all support for the Rose Quarter expansion and directed all city staff to cease working on the project. A few months later, the city entirely split from ODOT on this project. Eudaly wrote a letter to the Federal Highway Administration which said they were taking this unprecedented step because the project is “not aligned with the values of the city as articulated in [the Central City 2035 plan], Racial Equity Plan or Climate Emergency Resolution.”

With their updated plan for the expansion, some advocates feel ODOT has sufficiently addressed the equity concerns. But climate activists have not been satiated, and they’re calling on the city to call off their participation until ODOT shows they’re serious about tackling the climate emergency.

Activists have been concerned about the freeway expansion’s impact on the surrounding Albina area, which consists of historically Black neighborhoods in North and Northeast Portland that were decimated when I-5 was constructed in the 1960s. The nonprofit group Albina Vision Trust (AVT), formed in 2017 to advocate for restoring the Albina area, has put pressure on ODOT to ensure the expansion won’t recreate the past damage.

While AVT pulled support for the Rose Quarter project in 2020, they rejoined the conversation last year after Oregon Governor Kate Brown stepped in to orchestrate a compromise that would require ODOT to cap the freeway enough to create a street grid over I-5. AVT’s primary goal has been ensuring a robust cap system over the Rose Quarter freeway to create opportunities for Albina neighborhood restoration. Now that ODOT has provided capping plans they find sufficient, AVT is back on board, and the city is following behind.

Other freeway fighting groups, however, are still not pleased, and they’re asking the city to hold off on adopting an IGA with ODOT until they can more sufficiently leverage their power. Climate activists from groups like No More Freeways (NMF) say adding lanes to the freeway will encourage more driving and increase greenhouse gas emissions from transportation. Right now, ODOT is planning a potential road use pricing plan on I-5 in addition to the lane expansion. But climate activists say ODOT is being wishy-washy on pricing, and they could manage congestion simply by adding road use fee requirements to disincentivize single passenger vehicle trips – no freeway expansion needed.

A June 20 letter to Portland City Council from NMF as well as Allan Rudwick of the Eliot Neighborhood Association and Mary Peveto from Neighbors for Clean Air asks Council to rethink adopting the IGA with ODOT until they analyze a pricing-only alternative to lane expansion. They cite the city of Portland’s Climate Emergency Declaration, adopted two years ago, as evidence moving forward with the project is in opposition with Council’s own goals.

“We are disappointed that the City is not using its leverage in returning to the table for this project to ensure accountability for the climate and environmental impacts of highway expansion,” the letter reads. “ODOT’s position on the timing of road pricing is plainly at odds with adopted city policy.”

Anti-freeway activists want ODOT to complete a lengthy Environmental Impact Statement of the expansion that meets their standards, which the state does not want to do. But they must comply with an environmental analysis requirement from the feds, which has set the timeline for this project back. According to a Council document outlining details of the IGA, the city will not be required to play a large role in the federal environmental review, but will “have an opportunity to review the supplemental environmental assessment” and provide comment to the state and the Federal Highway Administration on the results.

This could be an opportunity for the city to make requests of ODOT local climate activists are asking for.

“We urge you to withdraw the IGA from today’s agenda and renegotiate it to include a commitment to a full Environmental Impact Statement (EIS) including analysis of a pricing-only alternative,” the letter from NMF reads. “Anything less is willful neglect of your self-declared climate obligations and your duty to the community to ensure accountability for all the impacts of freeway expansion.”

Portland Bureau of Transportation Public Information Officer Dylan Rivera told BikePortland via email this agreement is “a big step” for the bureau and the City of Portland.

“It marks a turning point for the project, enabled by the Hybrid 3 option that Commissioner Hardesty negotiated for the city in talks directly with the governor, regional leaders and community partners in the last year,” Rivera writes. “Everyone agrees that pricing is essential and that it is expected to be in place before the opening of the Rose Quarter project. With the agreement in place, the City will be able to engage and advocate for appropriate environmental study. Since Hybrid 3 is a new option, it requires a re-evaluation of the environmental assessment that ODOT did on the project.”

While the state could theoretically move forward with the project without city involvement, it would be a lot easier for ODOT if they could form a united front.

Given the widely-publicized controversy the Rose Quarter expansion project has attracted, it’s hard to imagine this IGA will slip under the radar without a hitch. Stay tuned for details about how the City Council discussion plays out today. 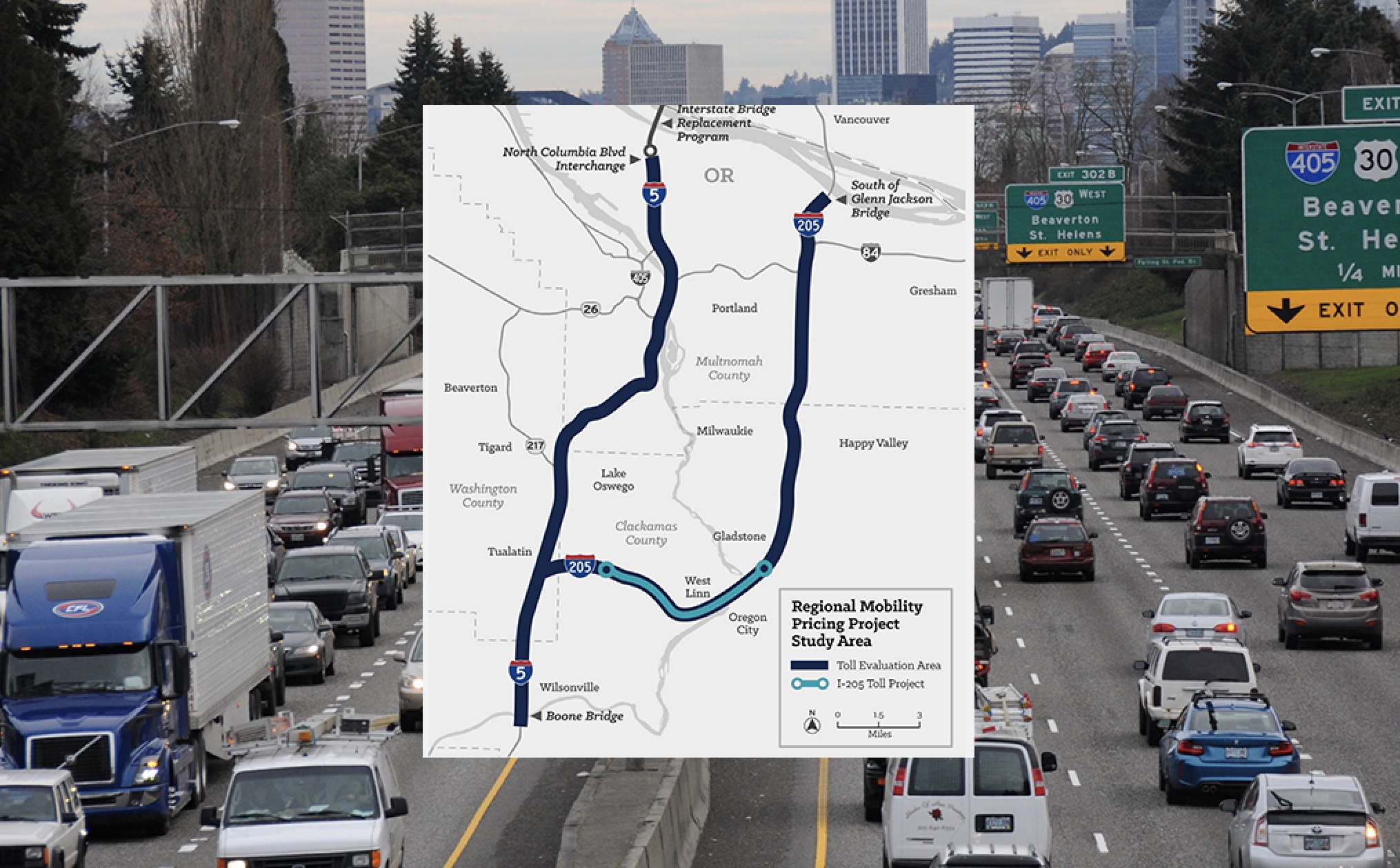 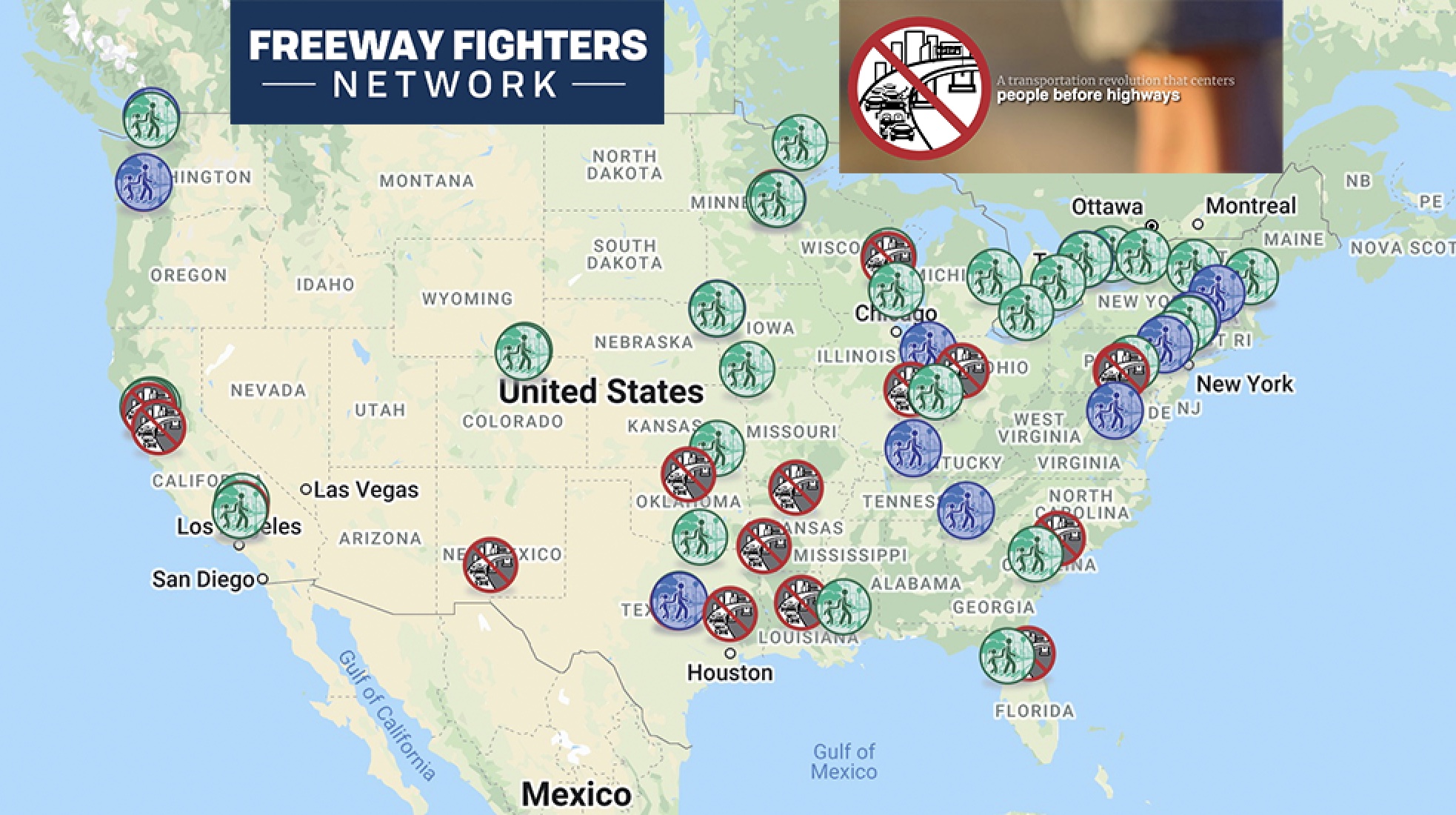 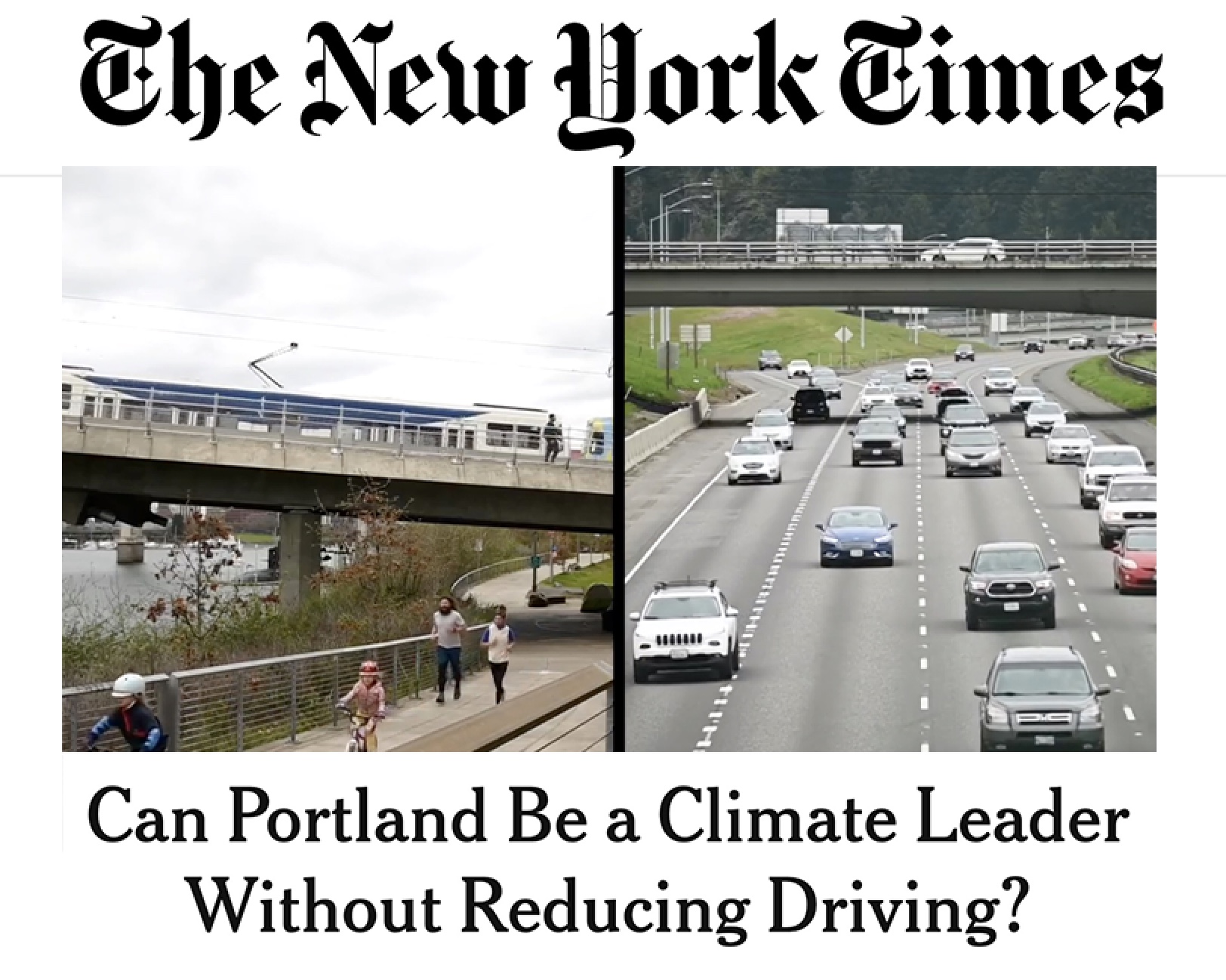 It’s a huge day for Portland transportation reformers who want Oregon to more quickly adapt to a future where freeway expansions don’t happen and we finally break off our dysfunctional relationship with cars.

Activists who’ve spent years fighting against the negative impacts of our region’s car overuse problem woke up to a major story in the New York Times that gave their positions and opinions a national platform. To make it even better for them, the venerable news source framed their story around a question, “Can Portland Be a Climate Leader Without Reducing Driving?” that isn’t much different than the main tagline of local nonprofit No More Freeways: “Climate leaders don’t widen freeways.”

Also this morning was a meeting of the Interstate Bridge Replacement Program where project leaders outlined the Locally Preferred Alternative to elected officials from around the region. One of them, Portland Bureau of Transportation Commissioner Jo Ann Hardesty picked apart their presentation and assumptions and offered some of her sharpest opposition yet to the project (full story in a few minutes). And that was Hardesty’s second meeting of the day. She was up early for Metro’s Joint Policy Advisory Committee on Transportation where she expressed discomfort about ODOT’s plan to toll I-205 and use the money to invest in more freeways. 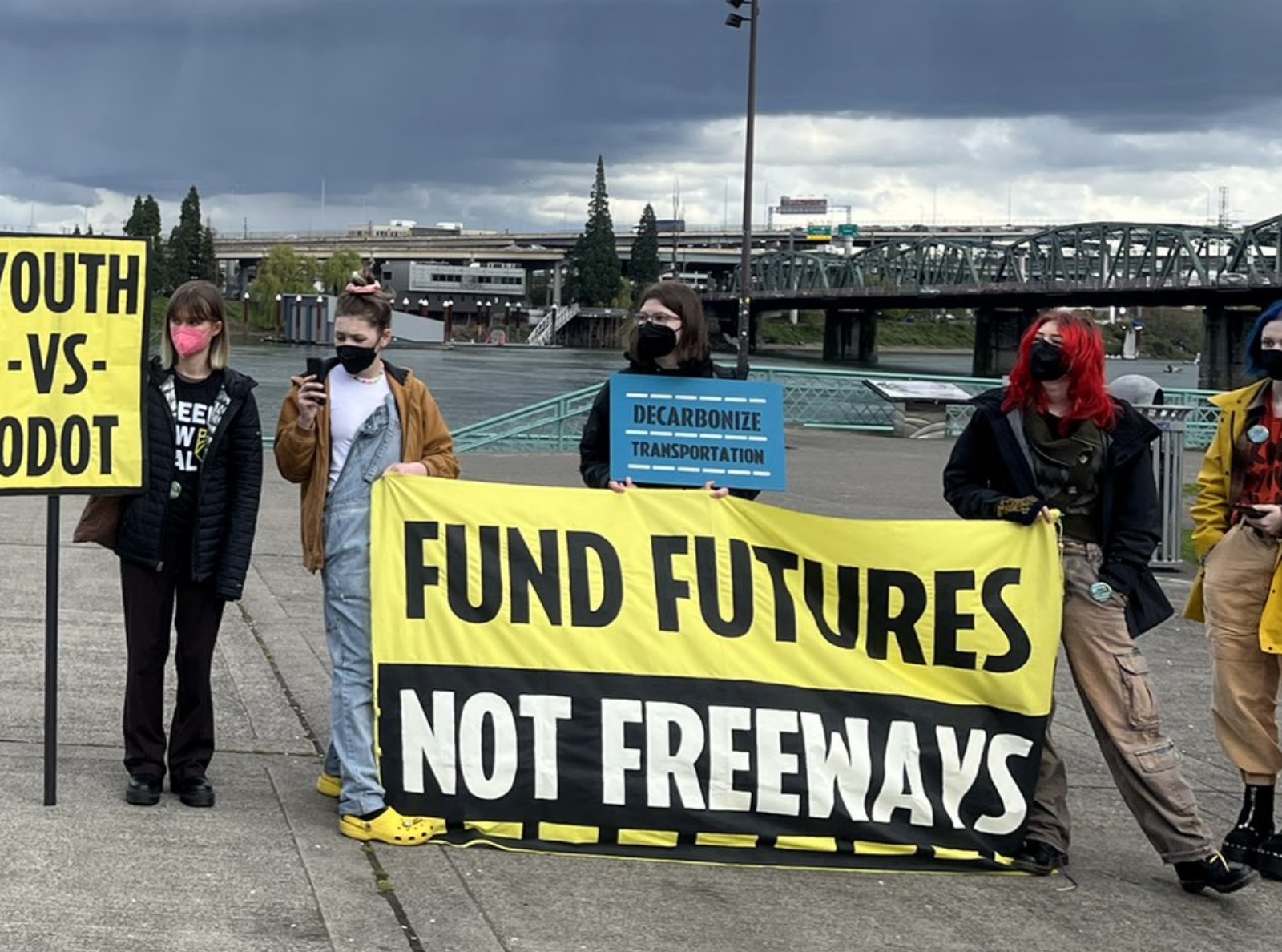 We’ve spent a lot of time talking about how President Biden’s Infrastructure Investments and Jobs Act (IIJA) is going to impact Oregon’s transportation system. Now, as Biden is traveling to Portland this week to hype up his landmark infrastructure bill, we’ll get to hear from the man himself.

Or, I should say, the lucky few who can afford a private donor luncheon with the president will get to hear from him.

For local climate activists, Biden’s visit is an opportunity to appeal to him using their common refrain: “no more freeways.”

Willamette Week reports the president will hunker down with donors at Portland Yacht Club on the Columbia River, which would give a potential speech a backdrop of the Interstate Bridge just as its backers press for a major federal grant to replace it.

Oregon will receive about $1.2 billion in federal funding, which the Oregon Transportation Commission will direct to various projects that have a range of support from transportation and climate activists. 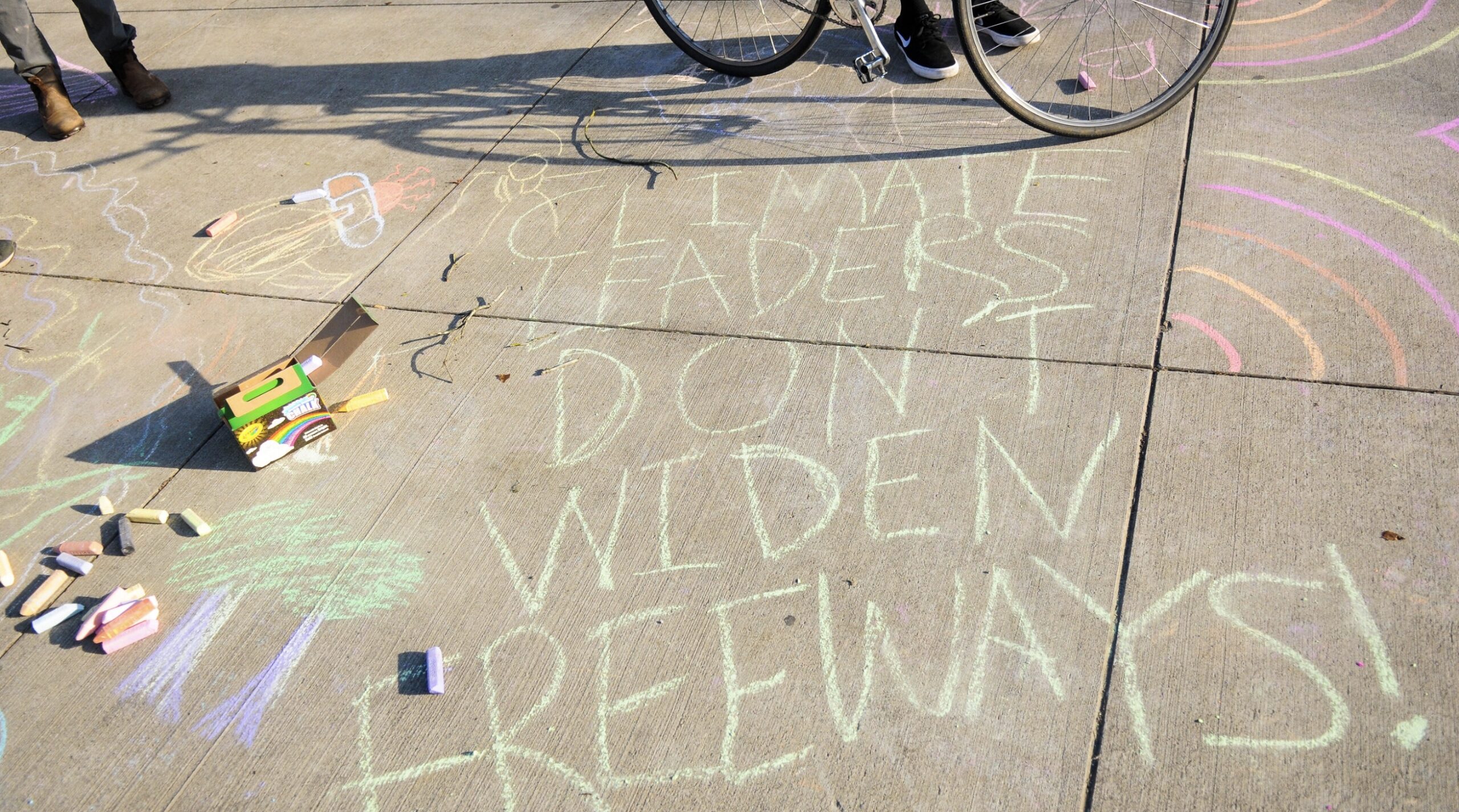 Two freeway expansion projects that were due to be approved by Metro Council at a meeting today (7/29) have been taken off the agenda and will be given their own meeting next week. The change is notable because, as we shared last week in an opinion from transportation and climate change activist Chris Smith, the items were previously on a consent agenda which meant there would be no formal vote or discussion.

The newly scheduled meeting on Tuesday at 2:00 pm (8/3) takes the controversial resolutions out of a consent agenda and they will now be discussed and voted on by Metro Council members separately. It’s not a public hearing, and public comment will still only be taken at the start of the meeting, but the move is a small win for activists who’ve flooded Metro Council with concerns about the projects. 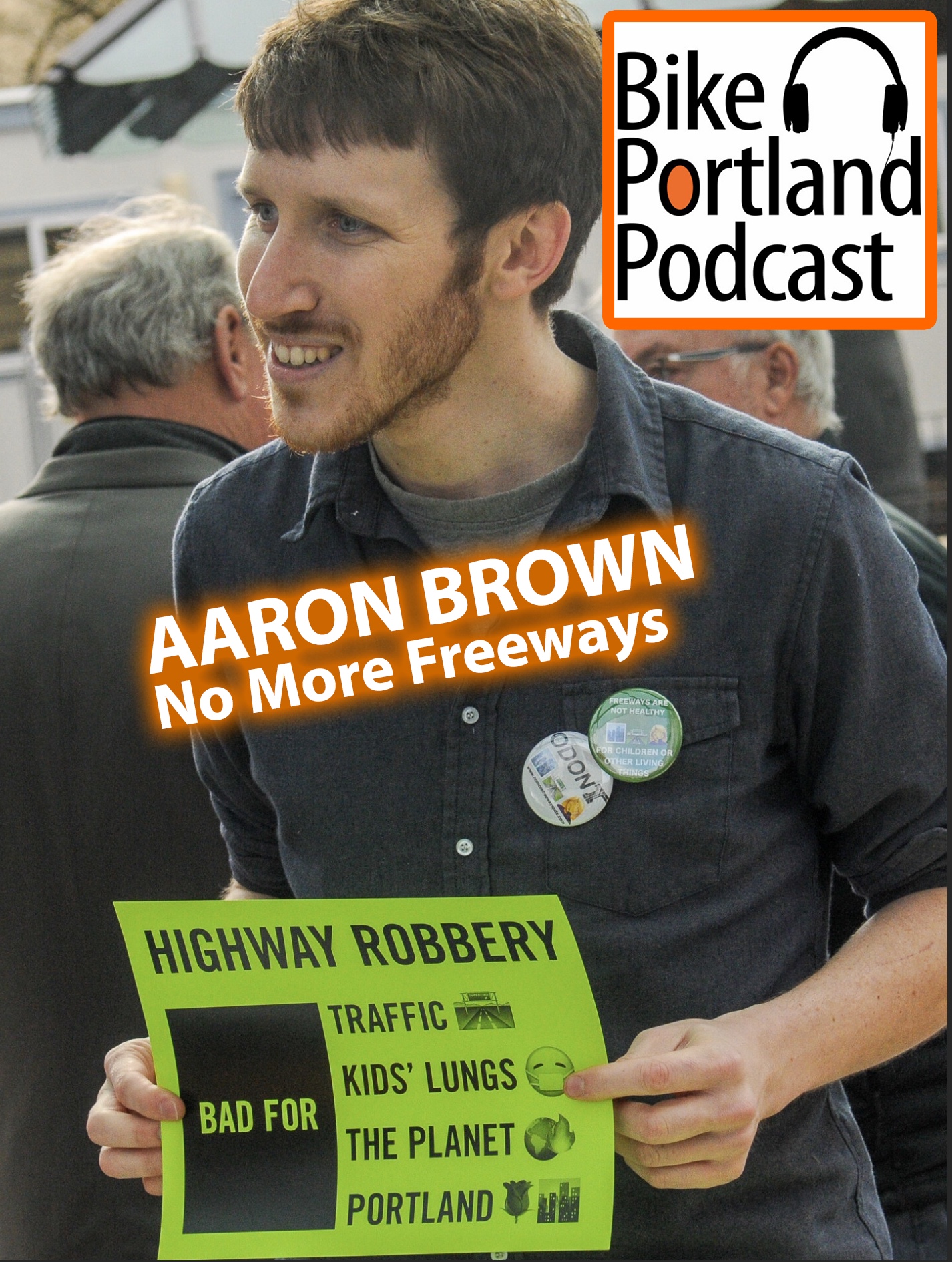 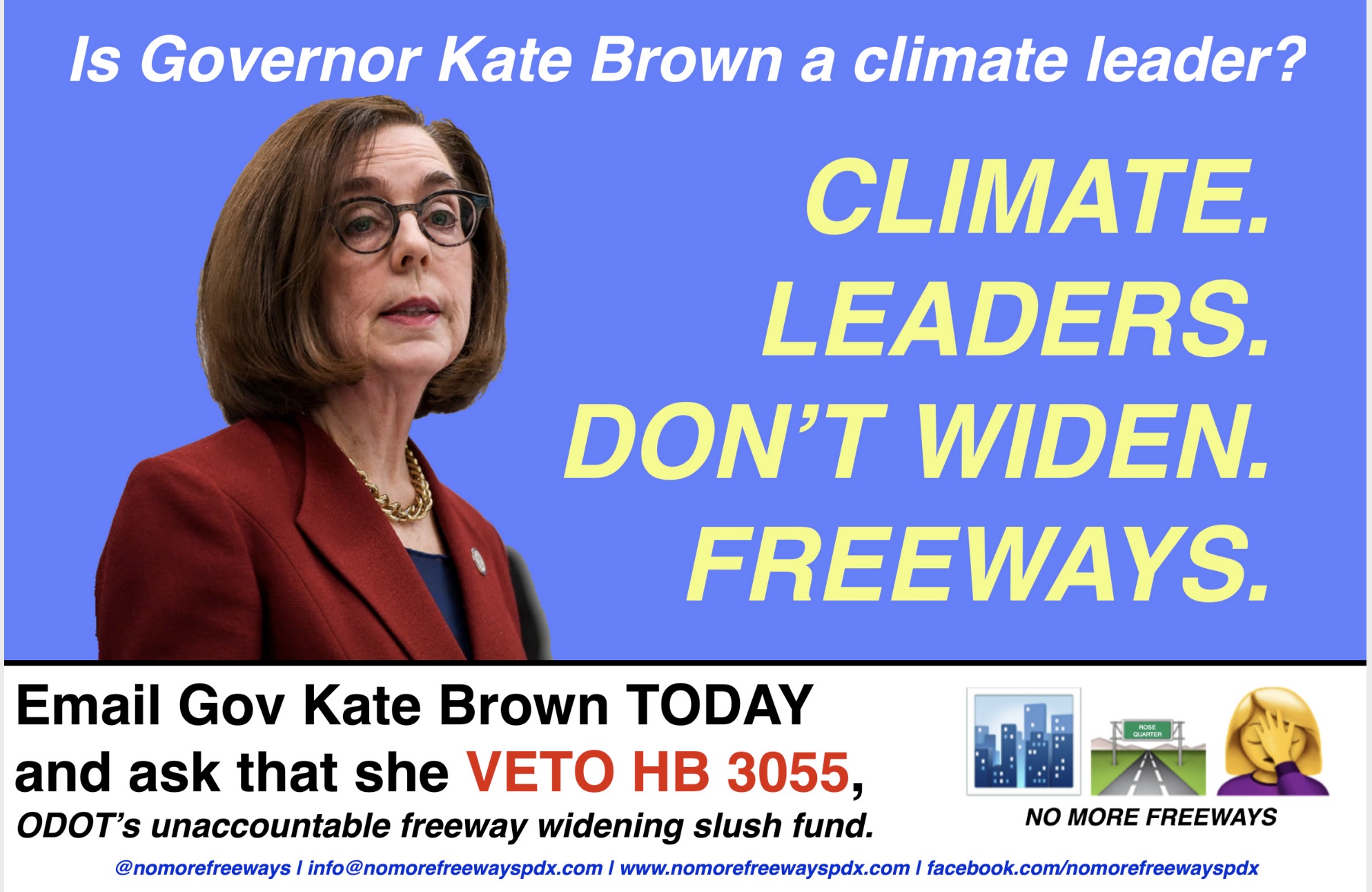 The recent heat wave, looming wildfire risks, and lawmakers’ tone deaf support of freeway expansions are fueling high anxiety about climate change in the Portland region. And as you might expect, many people are organizing and taking action to do something about it.

You’ll likely see this poster (right) at these shops next time you stop in. The poster has QR codes where you can learn about the legislation and send your congressional representative a note to urge their support. 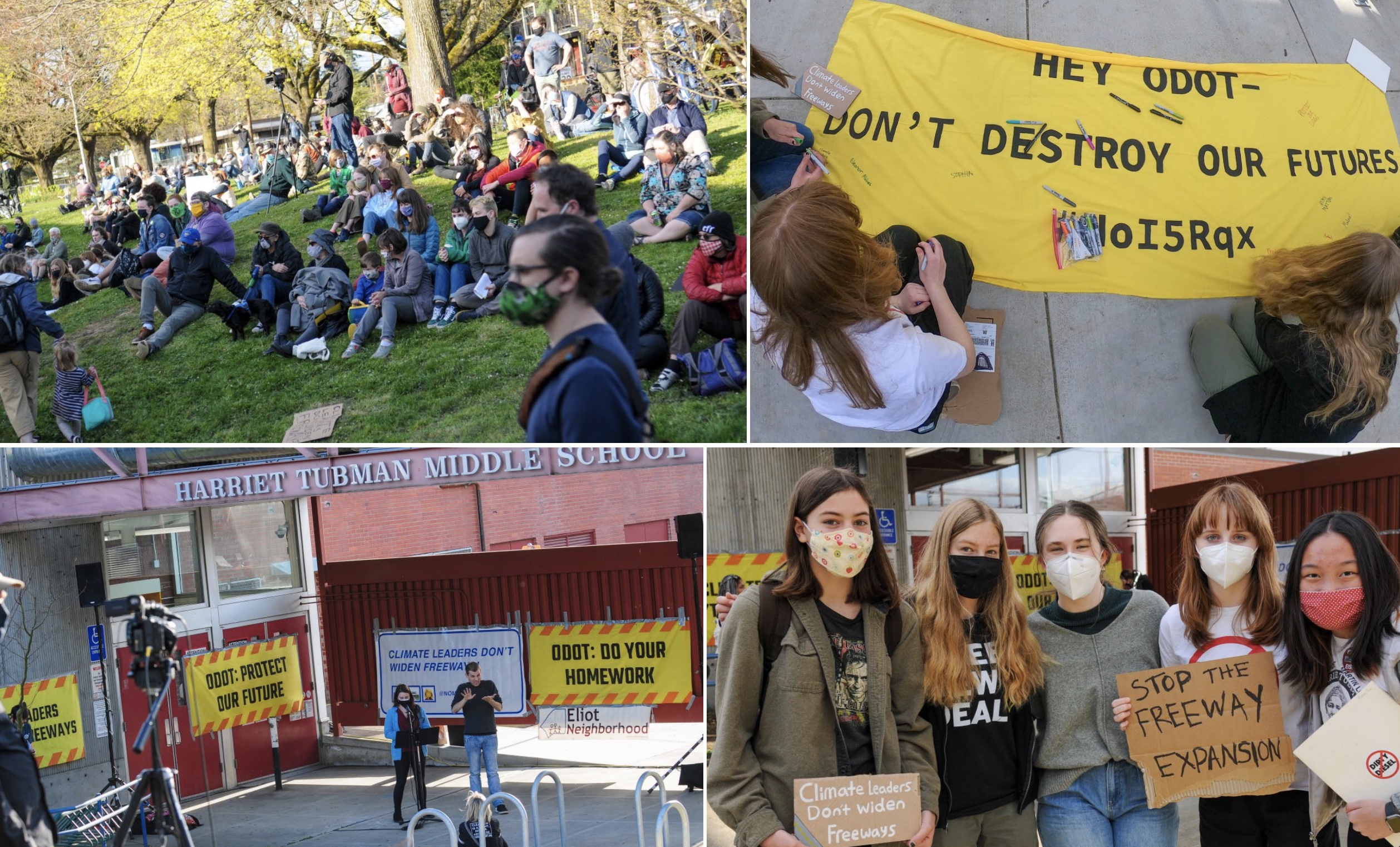 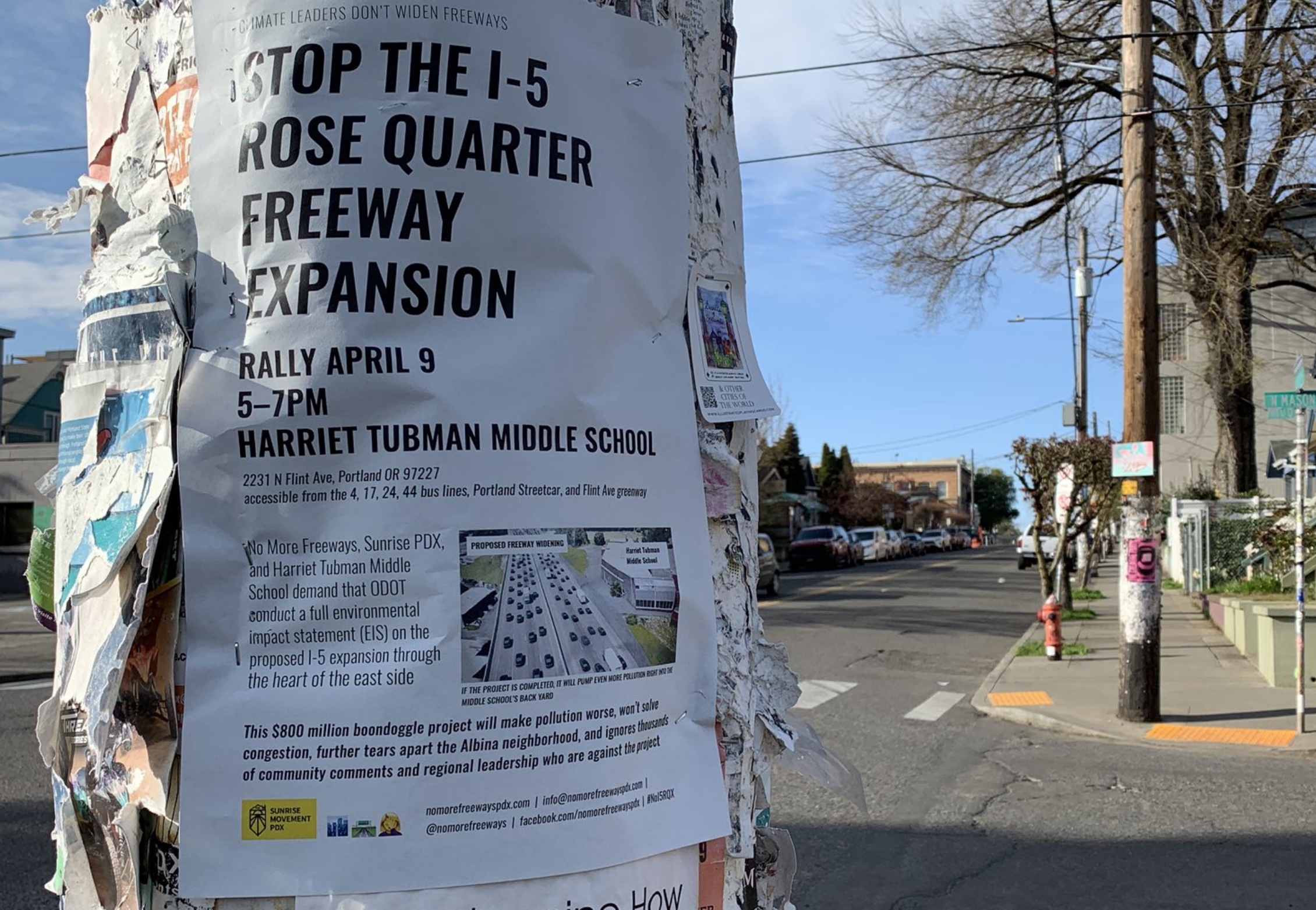