On Earth Day yesterday, Portland-based nonprofit Neighbors for Clean Air organized a protest on the Flint Avenue Bridge. Dozens of students from nearby Harriet Tubman Middle School joined them. They wore masks, donned “No Dirty Diesel” t-shirts, and chanted, “Diesel is dirty! Diesel is dumb!”. 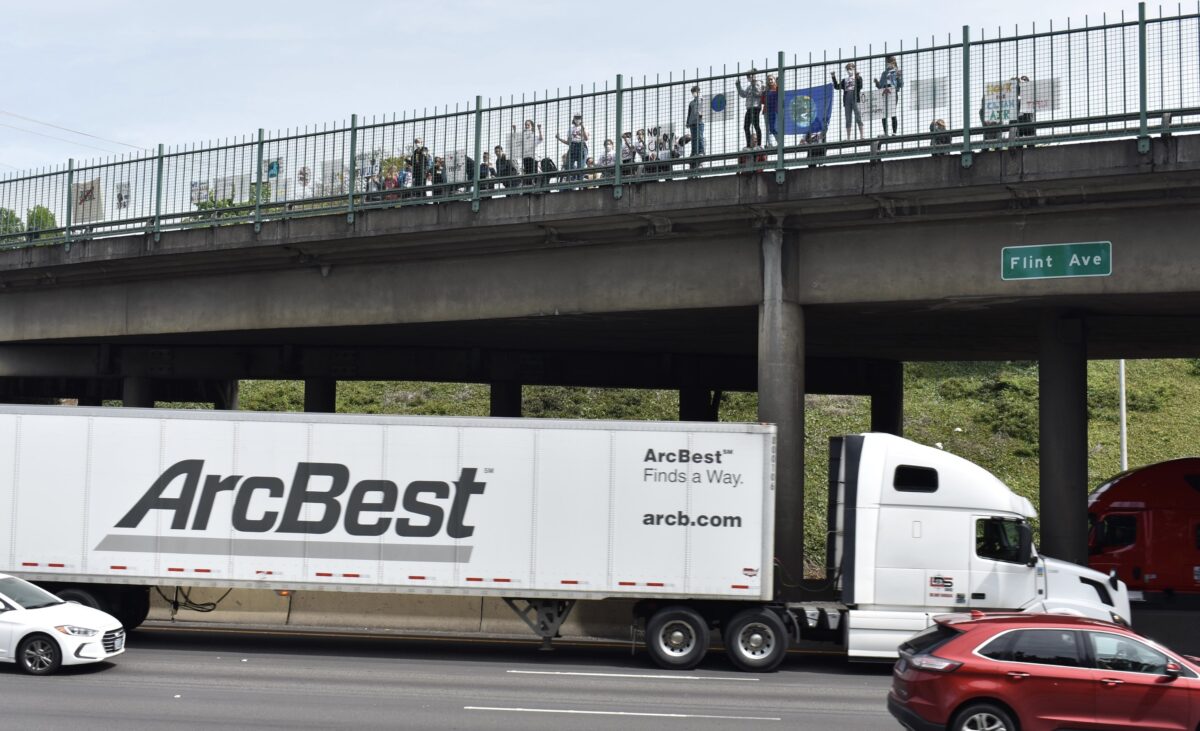 From their perch on the bridge, the students could see thousands of people driving fossil fuel-burning cars and trucks below. They could also see their classrooms. Tubman is just 50 feet away from I-5 and has a well-known history of bad air quality because of it.

The kids were there to support House Bill 2007, a proposal that would create stronger regulations for diesel emissions. But they were also a visible symbol of what’s at stake with the I-5 Rose Quarter freeway project.

The Oregon Department of Transportation and the City of Portland want to to expand the freeway so it — and the toxic driving it encourages — will be even closer to the lungs of these students. Despite their claims to the contrary, ODOT’s freeway expansion will lead to more drivers, more exhaust, and dirtier air. The plan is so harmful that the Portland Public School Board is vehemently opposed to it.

“The potential impacts of the proposed project to Harriet Tubman Middle School are particularly troubling,” the School Board wrote in a letter outlining their demands for a more thorough environmental analysis.

The widening of the freeway would also require that ODOT demolish and remove the bridge the students stood on — a move even the Portland Bureau of Transportation’s own Bicycle Advisory Committee said is a bad idea. “The removal of the Flint Ave crossing… would have a negative impact on bicycle travel that cannot be replaced by any of the facilities proposed in the Build alternative,” the BAC wrote in their letter opposing the project. Currently about 3,000 people ride bicycles over the Flint Ave Bridge every day.

These Tubman students deserve better. We’re grateful for their courage in speaking out and we hope our local elected leaders take heed. 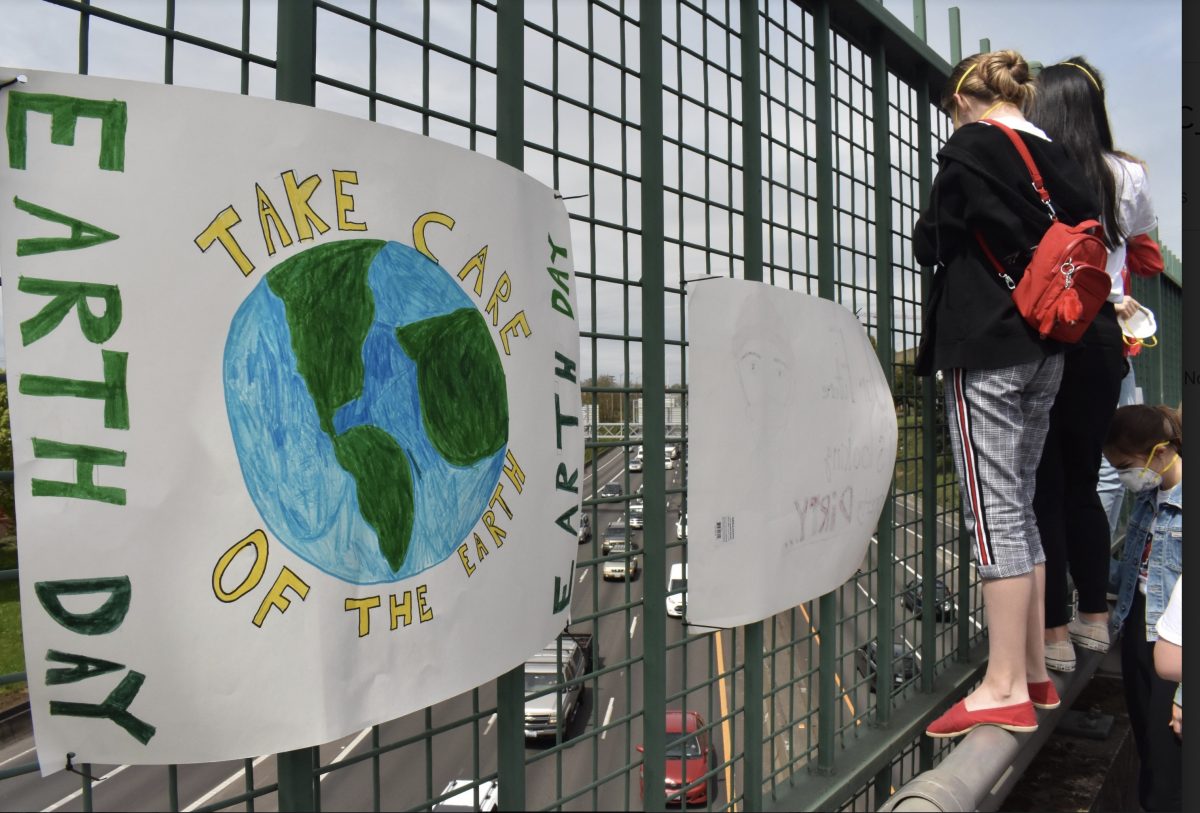 These students will soon learn that youthful exuberance and optimism are no match for the U.S. petrochemical-automotive-transportation industry juggernaut. Sad.

I really want PBOT and ODOT staff together explain to these kids that the mediocre bike/ped improvements and the useless lids are worth the toxic air that will fill these young students lungs.

So the public comment period is over- has it had any effect on project plans? I get the feeling ODOT is going to go quiet for a few months and then just build whatever they want.

Who puts a school next to a highway?

Toby Keith
Reply to  Middle of the Road Guy

And I bet most of those kids were driven to school.

Dan A
Reply to  Toby Keith

Much as I’d like every kid to walk, bike or get bused to school, not every kid has safe routes to help them get there, and buses are being cut around the metro area like crazy. My son has never been driven to school, but he also lives less than half a mile away and can bike there on neighborhood streets. What is the infrastructure like around Tubman? I suspect it’s terrible.

There’s no problem with the infrastructure near Tubman Middle School. There’s lots of capacity on Vancouver and Williams for cars seeking to avoid congestion on I-5. And, since there’s no enforcement of speed limits or other traffic suggestions (formerly laws) in Portland, it’s easy for motorists to make up lost time speeding through neighborhoods. What could possibly go wrong with the philosophy of “congestion on arterials is your friend?”

Ha ha, yeah, have a nice day at -cough cough- school, kids, if you make it across MLK, Williams and Vancouver.

Aaron Brown
Reply to  Middle of the Road Guy

the school was there first.

Aaron Brown
the school was there first.Recommended 1

I bet they’ve never used I-5 for field trips or to bus kids around from other neighbors like they used to. I bet the teachers don’t use it when they commute from Vancouver. The deliveries they receive probably come from MLK rather than I5.

Middle of the Road Guy Who puts a school next to a highway?Recommended 3

Yep, you haven’t benefitted from a freeway. What about an airplane? Do you compost? Do you support big industry with the bike components on your ride? Grow your own food? What about your water? Do you ration it? This silly argument thread is laughable.

You’re a funny one.

What I do, or how much freeways benefit you or me has nothing whatsoever to do with environmental justice, which is what my post was about.

Having said that, personal consumption habits are a topic I’m always ready to discuss.

“Yep, you haven’t benefitted from a freeway.”

Freeways are a thing. We probably all use them directly or indirectly. But our world, not to mention the air quality for the students at this school, would be much better if we didn’t have them, or automobility which necessitates them.

“What about an airplane?”

Yes? Airplanes are also a thing. I sat in them a lot as a child. Now not so much.

You’re really reaching here. Of course I do. Doesn’t everyone?

“Do you support big industry with the bike components on your ride?”

“Grow your own food?”

“What about your water? Do you ration it?”

Couple of gallons per day. I am pretty sure I have you beat.

“This silly argument thread is laughable.”

Your contributions have been amusing. But at least I engaged you.

Middle of the Road Guy
Who puts a school next to a highway?Recommended 2

Kind of a funny question that diverts attention.
The problem is not the school, or its place, but the ubiquitous auto which, along with the infrastructure and concentration of power that accompany and perpetuate it, ruins everything within reach.

I disagree, in this case, the problem is the school’s location. It was completely rebuilt in the 80’s , after the freeway was built. It should not be there, period.

You mean the freeway?

What about all the other buildings, people, activities that necessarily occur proximate to freeways? Unless we declare the corridors cut by freeways through thousands of cities just in this country sacrifice zones your logic doesn’t really add up.

Middle of the Road Guy
Who puts a school next to a highway?Recommended 3

Probably the same people who for generations put highways* through neighborhoods inhabited by nonwhite people.

I wish people would stop playing games with this school. Freeway widening or not, this is a terrible location for a school. It’s unhealthy. Freeway expansion isn’t going to make it better. The project merits, or lack of, shouldn’t be based on a school that should not be in that location regardless.

It seems like the only game that is being played is by ODOT.

If you are proposing relocating the school, what else would you have us relocate, and where does this end? Who pays for it and have you consulted with the people who live, work, play, go to school along the I5 corridor, which in case you need reminding isn’t one school long? Maybe they have their own ideas about what should be done.

You’re obviously referring to the RQ expansion, but even without that, this is not a good place for children to be in school. The problem is not ODOT “playing games”, or even ODOT at all.

The problem is that we still allow unfiltered diesel engines in this state.

Isn’t this about the RQ expansion and the (fake) arguments ODOT keeps marshaling in support of it?

The Scanner reported (26 July 2018):
And the past has not always been kind to Harriet Tubman Middle School. Its opening in 1982 represented a monumental win against institutional racism within the school system.

At that time, African American students were being bused from their North and Northeast neighborhoods to attend some 32 predominantly White schools around the metropolitan area, as part of PPS’s integration practice implemented during the 1960s.

“Student outdoor activities be limited at Harriet Tubman Middle School, especially during high traffic periods,” states the first of a five Key Recommendations in the report.

“It will be interesting to see if there will be any final decisions to do monitoring at other schools,” John Burnham, interim senior director of environmental health and safety at PPS, told The Skanner. “But that hasn’t been pursued, except simply talked about. There’s no plans right now.”

Burnham added that there are thousands of schools across the country that are in similar situations, but he’s hoping PSU’s report will ignite discussions within other districts about testing their own air quality.

Where Tubman is concerned, PPS is spending $12.5 million to outfit the middle school against the air quality, which includes an HVAC system with multiple layers of filtration to cut down on pollutants.

“I can almost guarantee you that there is no other school in the country that has a system like this,” said Steve Simonson, senior project manager at PPS. “It’s probably going to be some of the cleanest air in the city of Portland.”

The state doesn’t even attempt pay a pittance to minorities anymore. Now they just blatently take their space and their clean air.

So… cars idling is better for the environment? Wasn’t this school closed from 2012 to 2018? And what about the lead found in the water at Portland schools. Did we forget about that? If you care so much about the environment, then why do you have 3 kids?