As we bide our time for the City’s Off-Road Cycling Master Plan to be completed and wait eagerly for Gateway Green in east Portland to open up this year (you are going to the Big Dig on Saturday, right?), there’s something worth watching in the small city of Scappoose.


A mere 20 miles north of downtown Portland, Scappoose is known to many adventure-oriented riders for being the home of the Crown-Zellerbach Trail and gateway to Vernonia, Astoria, and all the great riding in Columbia County. Now it might become home to several miles of new off-road bike trails on a currently vacant 80-acre parcel of land known locally as Vista Park.

Vista Park is a parcel situated just off Highway 30 and just south of the Crown-Zellerbach Trail and Scappoose Vernonia Highway. Here’s a map I made to give you a better sense of the location: 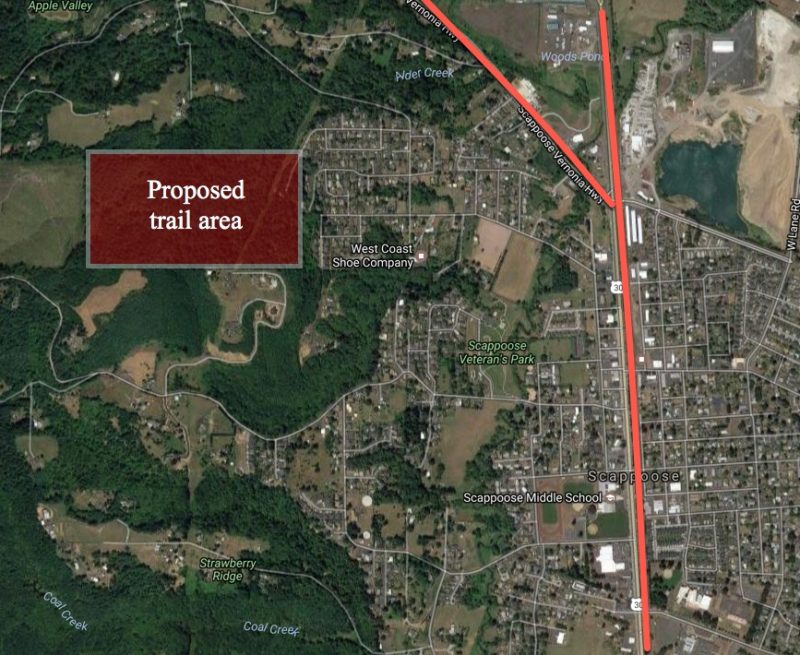 The concept — which is still in its formative stages — is to create several hiking and biking trails within the 80-acre park that would appeal to a wide variety of riders. Hammond has mapped out three trails: the “Backbone” trail which would be mixed-use on an old fire road that would lead to a singletrack loop with “stunning views” of the Columbia River; the “Highland” trail which would be more bike-centric; and the “Skillz” trail a bike-only loop that would be more challenging and technical. Hammond also sees potential for pump track/skills area that would be the bike equivalent of a skate park that would appeal especially to younger people in the area. 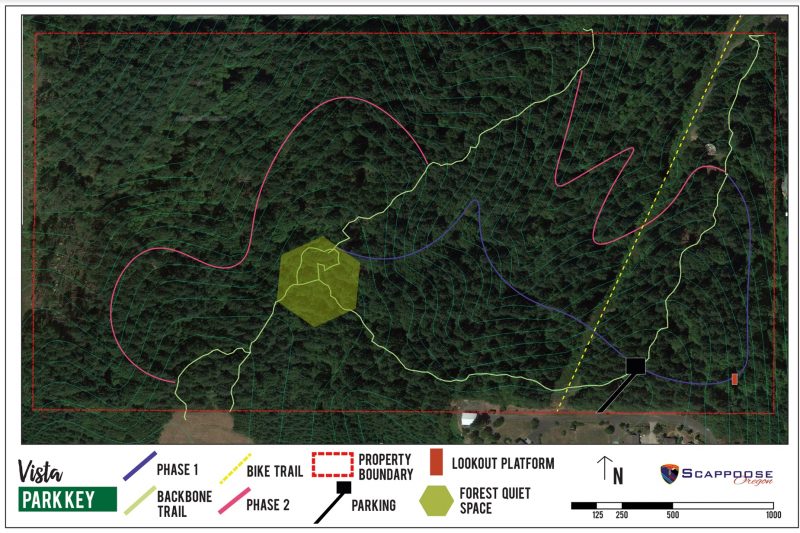 Hammond says Vista Park is needed because there’s a lack of off-road trail access in the Scappose area. Existing mountain-bike trails are owned by a private timber company and are subject to random closures and/or require permits. Vista Park could also tap into demand that’s being generated by the CZ Trail, the ever-expanding trail system (thanks to NW Trail Alliance) at L.L. Stub Stewart State Park in Vernonia and the off-road riding areas in Forest Park (as limited as they might be).

There’s also a lot in it for the Scappoose economy. “The community would become the ‘hub’ of the trail system,” Hammond notes in the proposal. As we’ve reported in the past, Columbia County is already doing its part to court cycling.

The City currently owns the land and Hammond expects building and maintaining trails will be done by volunteers. The main barrier to moving forward is to make sure everyone is aware of the project and wants it to move forward. Vista Park is currently open to the public and is used by locals, so it’s already on the mental map of many residents.

Ben Tolles with the City of Scappoose has been following the project. He says the time could be right for a new park to materialize because the city is in the process of updating their 1997 Parks Master Plan. The update is happening specifically to encourage new park developments in the city.

“Right now our plan is to talk about Vista Park at our Annual Town Meeting this weekend to see how the community feels about it,” Tolles shared with us via email this week. “We have a great idea but right now it’s just that: an idea. Once we gauge community support we can decide if we officially include in the City’s Parks Master Plan as a goal of the city.”

Tolles added that he’s heard strong support from Scappoose residents for the park, but that doesn’t mean it’s a done deal.

Hammond and Tolles say they want to get more feedback from potential users. Vista Park is expected to be a topic of conversation at the upcoming annual town hall meeting this Saturday (2/11). If you live, work, or ride in Scappoose, consider showing up and sharing your thoughts. You can also email Tolles at btolles@cityofscappoose.org.

If all goes smoothly, Vista Park could break ground by fall of this year.

Awesome! This is great news for the region. I like how they will share the trails with horses and bikes and hikers :). It can be done amicably Marcy Houle and Catherine Thompson.

Wonderful news! I am looking forward to riding new track in Scappoose!

This is great to hear. This is especially great news after I heard all of Rocky Pt Rd was harvested.

Yes that was a good place to ride, and seemed to hold water really well during the rainy season.

Are you saying that Rocky Point Road is no longer a riding area? Its been a few years since I’ve been out that way, but was considering going again soon. Would be a shame if its gone…

Yes – from what I have heard. I haven’t been out there to confirm it, but the person that told me is very reliable.

Sorry Alex, fortunately I am wrong. Just the front is logged. Went there last night and a local informed me the back half still has trails. I rode it and it was a blast. Scappoose Lives!

I was completely logged last fall. I’ve ridden across the street and got a good view. All of the trees are gone there. I couldn’t believe it either. Love riding there with my dog and need a new close to home outlet.

I stand corrected!!! It is not completely logged. Perhaps just 35%. Lots of fun trail left.

Rock Point Road that connects NW Skyline Blvd to Highway 30 has lots of clearcut, but I saw some new evergreen trees planted about half-way up the climb. There is a lot of scotchbroom weeds.

Has anybody heard any updates on this?

I’d like to know about updates on this story.