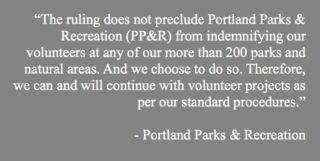 Turns out the forthcoming bike park at Gateway Green won’t be “crippled” by a court decision after all.

After the Willamette Week published a scary story yesterday about a legal loophole in Oregon law that allows people to sue city employees and volunteers for injuries sustained on City-owned properties, we’ve been trying to learn more about potential impacts to not just Gateway Green but the over 200 other Parks-owned properties around Portland.

If other cities have closed recreational facilities due to this loophole, what would happen in Portland? Volunteers are the backbone of many parks and public lands where we ride bikes, and losing them — or losing access completely because of liability concerns — would be a major setback.

Our initial inquiries with the City of Portland and other sources to clarify these impacts didn’t get very far. The Parks Bureau seemed to be caught off-guard by the Willamette Week story and no one else would comment due to it being a sensitive legal issue (if only I had a nickel for every time I heard “Sorry, I can’t discuss legal matters”). The City’s Office of Government Relations would only refer us to the pending legislation that will close the loophole and that we outlined in our story yesterday.

But what if those bills don’t pass? How will Parks’ and other public lands in Portland and throughout the state be impacted by the 2016 Oregon Supreme Court Ruling that found the legal concept of “recreational immunity” does not extend to city employees?


While we are still working to clarify those and others questions, we finally got a substantive response from Portland Parks & Recreation. Read it below and breathe a sigh of relief:

The ruling does not preclude Portland Parks & Recreation (PP&R) from indemnifying our volunteers at any of our more than 200 parks and natural areas. And we choose to do so. Therefore, we can and will continue with volunteer projects as per our standard procedures.

For your readers who may be active or potential volunteers, this means volunteers need to engage in sanctioned Bureau activities (not showing up on their own) and to sign in, legibly, printing their name so it can be read by others in addition to their signature.

Second, volunteers need to stick to the assigned tasks using the tools and techniques they and the supervising staff agreed to. And this includes the day and time of the volunteer work – staff should not come back on another occasion, on their own accord, to make further efforts.

And of course, we always expect volunteers to work in a safe and cooperative manner.

Portland Parks & Recreation welcomes nearly half-a-million volunteer hours which Portlanders donate to the Bureau’s land each year. They help care for our iconic parks and public spaces, and we want volunteer activities to help impart neighbors with a sense of ownership of our amazing public spaces.

PP&R has more than 11,000 acres of parks and natural areas. While volunteers most definitely do not take the place of our valued, experienced and dedicated employees, volunteer efforts are key in stewarding our nationally-recognized parks system. We always welcome more volunteers, if interested, people can join in either directly through us at PP&R or through our valued friend and partner groups.

While this is good news for volunteers and projects like Gateway Green that rely heavily on them. Parks’ statement says nothing about City employees. That issue is an unresolved situation that will have to wait for a fix from the Oregon Legislature. Right now, cities are still very open to tort claims because of the 2016 ruling. Even if a city indemnifies volunteers and employees, that doesn’t prevent a suit from being filed.

That’s why the Portland Office of Government Relations released a statement to us today saying, “The City of Portland is actively working with public, private and non-profit partners on a legislative fix to reestablish the recreational immunity and ensure robust public recreational opportunities for Oregonians.” They want this loophole closed in a hurry. The Oregon Trial Lawyers Association, on the other hands, wants to make sure it stays open and we can expect them to fight hard against the expansion of recreational immunity bills in Salem.

There’s one other thing I learned about this issue in the past 24 hours. In 2011 the City of Portland partnered with local non-profit advocacy group SW Trails on a piece of legislation to expand immunity to landowners and volunteers. That effort led to a law, ORS 105.668, that gives immunity to unpaid volunteers who work on projects on unimproved land in the public right-of-way. It seems like that law, which wasn’t mentioned in the Willamette Week article, could provide a possible workaround for Friends of Gateway Green and other volunteer groups who do work on City-owned properties. It wouldn’t be a perfect fit (the land has to be “unimproved” and the upkeep maintenance has to be the sole responsibility of volunteers), but it’s worth keeping in our back pocket just in case.

Also keep in mind that the ruling that sparked the Willamette Week article doesn’t mandate closure of recreational facilities. This issue is about insurance rates. The City of Redmond closed their rock climbing wall (the example highlighted in the article) because their insurance rates “Went through the roof,” (according to a conversation I had with City Manager Keith Witcosky) and they couldn’t afford a policy. Even if those bills don’t pass the legislature this session, it’s possible the City of Portland — which is much larger than Redmond — could find affordable insurance rates for things like a bike park and would therefore be able to keep them open without major legal concerns.

The opening of the park is the only reason why people should come in Gateway. I know bikers are aware of the danger signs and the legislatures should also mind about those people, employees, agents and volunteers who do volunteer works for the park. They all do it for free and for everyone to enjoy!

It’s not that simple, Jonathan. I was involved in a recreational event, in which a spectator was seriously injured. I was included in the laundry list of those being sued. Yes, the landowner included me in the parties being defended. But, when I talked to an attorney, he said that I needed to hire my own personal attorney, because my interests were of little consequence to the landowner and you should never count on someone else’s attorney. Outcome was that my attorney got me removed from the suit eventually, but it cost me $2000. Any party to a large dollar suit needs his/her own attorney.

I know it’s not simple Steve. Legal issues are always complicated. But I just want to clarify that there’s a big difference between a “recreational event” like a bike race and simply having a public facility like trails in a park that are free and open to everyone 24-7. It’s the latter case we are dealing with in the above story. Events are a different animal completely.

Hurrah for volunteers. We have Portland Parks and many other nice public facilities and events because people donate their time, energy, land and money.

I think there is a very special place for the people and the attorneys who sue volunteers.

Why is Portland the only City in the Country that struggles with this?

Oh, and during the Off Road Master Plan Meeting they were talking about class 2-3 environmental assessments in order to modify (AKA Make more sustainable) a trail.

How do you know that is the case?

“Parks’ statement says nothing about City employees. That issue is an unresolved situation”.

I do agree with Eric. if the park not opened then the people shouldn’t come into the park.