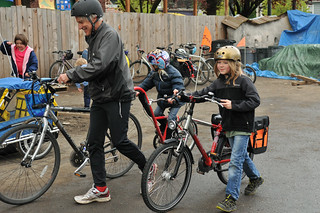 The regional Metro committee that controls $130 million in federal funds continues to consider an increase in money for road widening rather than for safety improvements to streets near schools.

JPACT, the committee of 17 regional officials, was due to vote last month but decided to postpone its vote until next Thursday.

At play are $17.4 million in new money created by last year’s federal transportation bill. The Bicycle Transportation Alliance and other nonprofits in the For Every Kid Coalition have led a two-year campaign to secure much of that money for Safe Routes to School infrastructure across the region, which improves crosswalks, sidewalks and bikeways near schools. Their proposal would prioritize “Title 1” schools, those with higher rates of child poverty.

Safe Routes to School has existed for 15 years in Portland and has apparently led to big increases in walking and biking. A Metro program would extend it to the suburbs.

As of March, 3,500 people had sent postcards and emails to Metro urging this to be the priority.

In an effort to lock down votes, the BTA sent its members another action alert on the subject this week, urging people to contact JPACT members with the following request: 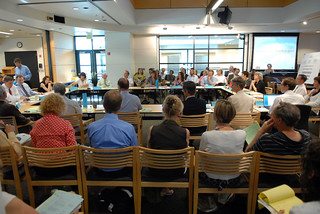 What will they do?

In light of the $17.43 million dollar increase in available funding this cycle, we ask you to support the safety of our community — from our kids to our grandparents — as they travel along and across roads throughout the region with:
• A minimum of $1.5 million for SRTS programs as part of the Regional Travel Options program
• At least $5 million in dedicated funding for Safe Routes to School infrastructure projects within the one-mile radius of schools, an important start toward the estimated $43 million dollar need
• A minimum of $27.7 million for active transportation infrastructure that increases safety for people walking, bicycling, and accessing transit
• Policy that supports equity and prioritizes Title 1 Schools

You can get the relevant email addresses here, or click this email link to auto-create an editable email on the subject.

Whatever JPACT decides, it would be possible for the Metro Council — a majority of which told BikePortland in March that they would almost certainly oppose reducing the share for active transportation — to overrule the vote and send the decision back for revisions. (Unlike JPACT, Metro council votes are distributed proportionally by regional population.) But Craig Dirksen, a Metro councilor from southeast Washington County who also chairs JPACT, told us that he has “never seen it happen and I would be very surprised if it happened.”

I grabbed the email addresses out of their list and wrote an actual email and subject line. Heard back from one office nearly immediately with a human acknowledgement.

Thanks, Tim! Care to join us on Thursday for the vote?

What are the details? eg what time, is there anything we can do other than watch, etc?

Metro Council Chambers, 600 NE Grand, 7:30-9:00 am this Thursday. We’ll have signs available to show support for Safe Routes and active transportation projects. We’ll be meeting at the Starbucks across NE Grand at 7:10 to walk over together.

if the freight industry doesn’t want congestion then they should stop using roads that are subject to congestion… they gave up on rail, which has the ultimate right of way over other traffic… to me they deserve very little input…

freight chose to sit in congestion…

freight is commercial, so they need to find their own money to pay for a faster way to delivery their goods…

schools are social, so we all need to bear the cost of getting kids to/from school safely…

otherwise, who will still be alive to buy their goods?

… is not quite true. There are also reps for the City of Portland, the City of Gresham, and the Port of Portland. Excluding Portland & Gresham, Multnomah County has one rep per 50,000 residents outside of those two cities. Meanwile, poor ol’ Clackamas Co has only two reps, the other for the small city of Wilsonville.

This gets at the heart of my argument that if Portlanders want better streets in your city, then you have to take the fight to the State level. Otherwise you will get the things you want within the city limits but not outside.

The bike/walk/transit advocacy groups headquartered in Portland need to relocate to Salem and constantly pressure ODOT and the legislature to stop funding highway expansion projects throughout the state. Until then we will see lots of great talk and little action.

It is important to not be sucked into the “freight congestion” argument at all. People who argue for funding to improve roadway capacity for freight have no data to show that (1) it is a good investment, (2) there is actually a need for relieving freight congestion, and (3) it actually works. Whereas there is so much research and data that show that investment in SRTS and active transportation creates significant benefits.

All that congestion is caused by single-occupancy vehicle traffic. If some of these JPACT members really care about relieving congestion, they ought to support investments that will give people more choices than driving everywhere.

Metro Council also needs to step up. Stop hiding behind the excuse that they can only send back JPACT’s decision but nothing more. You are our REGIONAL GOVERNMENT! Get your JPACT members in line and make it clear that SRTS is a higher regional priority than “freight congestion.

Providing availability of roads, streets and highways for reasonably efficient transport of freight, and active transportation infrastructure, the latter of which includes SRTS, aren’t, or shouldn’t be ‘either or’ priorities.

It’s true, I think, that area planners feel obliged to accommodate what’s commonly accepted to be, a growing population consisting of increasing numbers of people that will primarily drive to meet their travel needs, rather than the alternatives to driving.

Until indications are strong, that paradigm truly has changed…the road ‘widening’ type projects striving for more efficient travel and transport by motor vehicle, will be prioritized over active transportation projects, for funding.

Vote Up0Vote Down  Reply
« Portland’s biggest, baddest bike parking facility is about to open
Opinion: A permanent “Better Naito” deserves better than this »