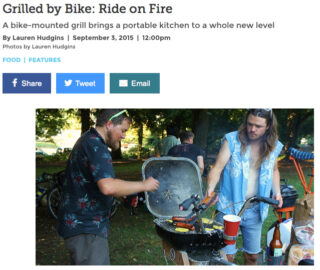 Grilling by bike in Paste Magazine.

If you’ve followed this site for a while you know that here in Portland, people do a lot of amazing things by bike: raising a family, getting married, moving, and responding to disasters are just a few of them.

I like to share those types of stories here on BikePortland because they challenge people’s assumptions about what bicycles make possible. That’s why I get excited when larger media outlets give them attention because their I know their audiences will be even more amazed and inspired.

Bike-powered BBQ’s are nothing new in Portland (remember the Musical Mystery BBQ Ride during Pedalpalooza 2005?), but it seems to be enjoying a renaissance and Paste Magazine has taken note:

Group rides, fun, food: it all goes hand in hand. In many ways—except for the flames, maybe—mounting a bike on a grill is the next logical step. Enter Grilled by Bike…

Grilled by Bike exemplifies the DIY attitude, but does it all while riding at high speeds in extreme conditions. Their group motto: Ride on Fire.

If pedaling around a grill doesn’t impress you, how about producing a talk show from a cargo bike?

The Pedal Powered Talk Show launched in 2011 and has been gaining speed ever since. Phil Ross and Boaz Frankel have done a fantastic job keeping the wheels turning and they’re starting to get much-deserved attention. Last week the excellent OPB show Oregon Art Beat tracked them down and devoted an entire segment to telling their story:

Congratulations to all involved! While bbq’ing and hosting a talk show by bike might seem like trivial pursuits, expanding people’s minds about the bicycle’s potential is much more powerful than it first appears.

Thanks for the kind words Jonathan! The Pedal Powered talkshow just started airing episodes from our 5th season! Check them out at http://www.pedaltalkshow.com

I love the bike you two use in yer show! Is this some sort of funky Portland bike that you two pieced together or can I get something like this in a retail setting? So cool!

Thanks for the #GrillBike coverage BikePortland and Paste Magazine! What’s kind of funny is that The Pedal Powered Talk Show and Grilled By Bike joined forces earlier this year!

I thought Phil was the Silent Bob of the operation and would never talk on camera. Looking forward to the Enchanted Forest episode. https://www.youtube.com/watch?v=KYFSELCVT30