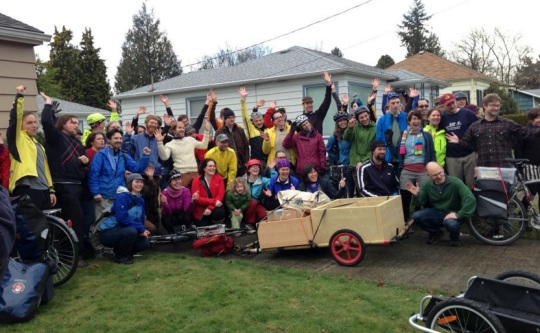 Bike moves — where people move the belongings of an entire household by bike — are nothing new in Portland. The fine folks at Shift have been facilitating the moves through their email list and via this page on their website for many years. In fact, it’s been nearly eight years (!) since we first wrote about them here on BikePortland.

But this past weekend, we were all reminded that the time-honored tradition is stronger than ever: Portland resident Steph Routh and her partner Ed Groth conjured up a record 70 people for their bike move from inner northeast Portland to the Lents neighborhood. Not only was that a record in the history of all bike moves (and yes, they keep track), KOIN-TV showed up to cover it and the story was then picked up by CNN!

Steph’s bike move ended up on CNN’s Early Start program (and strangely, the title of the video online was “Man moves across town using bikes”). Of course, both KOIN and CNN could not stop gushing that seeing people carry stuff on their bikes is, “So Portlandia!”

Watch the CNN clip below:

If you’re wondering how the heck this happens and/or how it’s possible. It’s simpler than you think. People simply post the details of their move and ask for help on the Shift email list, and then folks show up. Why would someone volunteer time on a Saturday to help someone (who they might not even know)? Because it’s fun! The hosts usually always have lots of great food and drinks (especially at the end) and the vibe is positive and friendly. Sometimes there are even themes. I did a “Puppet Parade” bike move once (the couple moving were puppet artists). 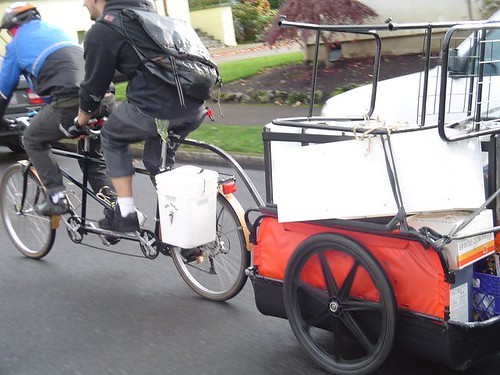 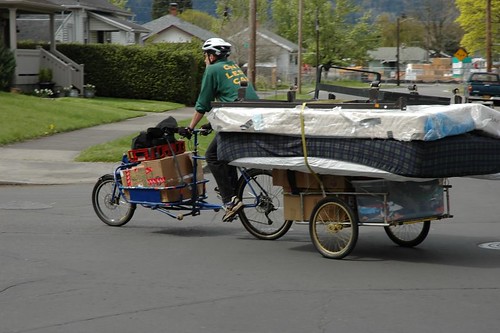 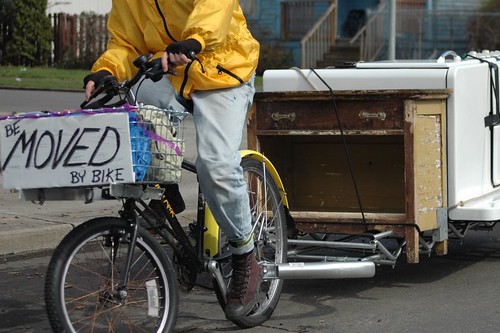 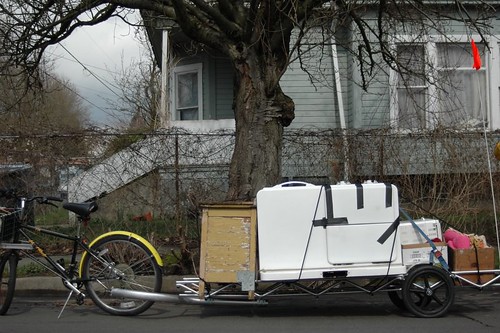 As for the technical considerations, that’s where Portland’s deep knowledge and appreciation of cargo bikes comes in. Some of the hardcore bike movers (some people are regulars and have been doing it for many years), are brilliant at knowing how to pack loads on bicycles. Many people in town also have huge cargo trailers which help with the large items like chairs, dressers, and so on.

Learn more about local bike moves on the Shift website.

Anyone know how they handled the larger furniture items? Couches can be quite heavy, and mattresses/boxsprings are pretty cumbersome.

They use a very large trailer with a surface area approximate to a queen-size mattress. Adam George of Portland makes them out of bamboo, hemp twine, and exoxy. They are sturdy and can carry a lot.

Here’s a picture of one.

Thanks Todd. Those looks pretty awesome.

Haha! That’s my bike! I hope my furniture found a good home!

Chris I
Reply to  rain bike

I think about 90% of people (regardless of mode) miss stop signs on a regular basis.

are
Reply to  rain bike

the stop sign in question was a few yards from the destination, in a quiet residential neighborhood, with no motorists or pedestrians anywhere in sight, and the intersection was corked. several of the bikes are carrying hundreds of pounds of stuff, making the empty gesture of stopping at a red octagon worse than pointless.

It is amazing how 70 people can come together to do the work that in previous years could only be handled by two men and a truck.

As the New Yorker would say, “Words of one-syllable dept.” : Two guys and one truck are definitely doing work. 70 people and their bikes do no work, they only have fun.

…and 47 dinosaurs, 75 oil-field workers and a few oil well pumps, 200 refinery workers, a cargo ship and crew, the U.S. Army and Navy, four more guys and two other trucks…

Thank you El Biciclero. I’ve been on 6 deployments to the oil wars, and it’s nice to get a little recognition for the real price paid for cheap gas.

Has anyone ever moved a model D Steinway by bike?

Last of the Mohicans
Reply to  Jim Lee

I’m sure it could be done using a wide stance trailer with angular offset A-frame, strong recommendation for the trailer to be sprung as the D is the flagship of the Steinway line. I would certainly try it, actually would enjoy engineering and building the trailer, of course would have to test it and also would require pizza and a couple of stouts afterwards.

Jim, Adam of Bound Bikes was actually planning to help us move but had a hernis from “moving too many pianos.” I’ve seen him move one with his bamboo bike but not a Steinway to my knowledge . . . yet.

I’ve witnessed the moving of an old foot-pump organ. Pretty darn heavy. Bike Temple has done it a few times for Sunday Parkways and other events. On one of Adam’s trailers.

This is a real thing? I thought it was just a joke on Portlandia. Wow.

I’ll be hosting my 3rd bike move coming up on the 9th! (And have participated in countless others) It’s amazing what you can do in a few hours with a group of people and some bikes. Kind of like an Amish barn raising. Builds community and friends. And you don’t have that back breaking experience that you would with truck and a couple people.

As someone that can’t drive this makes moving so much more accessible to me.

We always have people that don’t have loads that act as “safeties” or “corkers” making sure that traffic is clear so that we can cross intersections and corners without having to do much stopping or slowing. (Or as much as possible. There’s always stopping when in traffic.) When you have sometimes 100s+ lbs pushing behind you on the trailer stopping and starting a whole bunch is the last thing you want to do. Especially when you are pulling couches and pianos that can be upwards of 400+ lbs!!

Local bamboo trailer builder, Bound Bikes, has a 500 lb capacity and there are photos on his site of hauling pianos, mattresses, wooden play house structures, etc. boundbikes.com (I’ve personally hauled with them and they are great! Nice wide bed for extra stability where as the narrower trailers I worry about tipping) As a harpist that often travels to gigs by bike trailer, knowing your trailers is important. (FYI, I am not paid for my endorsement to Bound Bikes and have no affiliation. I just happen to like them. I don’t even own one.)

Also, here is a video by Clarence Eckerson Jr, pre Street films days. Interviews of people at a bike move. Pretty fun and interesting for people that have never been.

Perhaps the new mayor (or new City Transportation Director) should join in on a bike move. It would be as powerful as when Mayor Potter joined us for a Critical Mass Ride, back when CM was one of the few tools we had.

Do people ever show up with extra trailers in case someone wants to help but doesn’t have one?

I found the Progressive commercial a bit ironic, too.

Yes! And if you need one, let people know on the facebook event pages and often they can hook you up beforehand! People definitely show up withw extras sometimes. Sometimes people who can’t attend will offer to lend their trailers or cargo bikes even.

I don’t think a small moving van is all that big of a deal, but if you gotta stick it to the man…

Dude, when’s the last time you had *fun* loading and unloading a truck or a U-Haul? Seriously? Join a bike move. You’ll feel the difference.

I have a request for those that have experience on how to pack large things onto cargo bikes. Could you share that knowledge somewhere to help others? There’s a whole world of people who want to do this and will be web searching to find out what others have done.
Thanks.

Re: Capacity. The last two photos show a gas stove laid on it’s back, on that giant aluminum truss trailer. Heavier than any couch.

And that’s not even the first time that a huge heavy old iron gas stove has gotten hauled on a bike move. My friend Debbiane had one on her bike move back in 2006. Ultimately all you need is a strong trailer reasonably (but not even superhumanly) strong legs.

Is that an old Wedgewood stove we see laying on its back in the last two pictures?

Has anybody invented a “bike yoke” yet? One that would allow two to four bikes to all hitch to the same trailer for pulling heavier loads? I suppose that would require extraordinary coordination on the part of the pullers for things like turning and braking, but it would give a little extra traction and pulling force. I’d be interested to know if anyone has tried anything like that.

Yeah. It was called the “millipede.” There really had to be a person riding on it so it cut down really on most cargo transport. It had a manual brake on it so that it didn’t ram into the riders that were pulling it. Hooks behind the seat so you could hand your bike while you were piloting/steering it. But you could hook up infinite number of bikes – we just used inner tubes tied together.