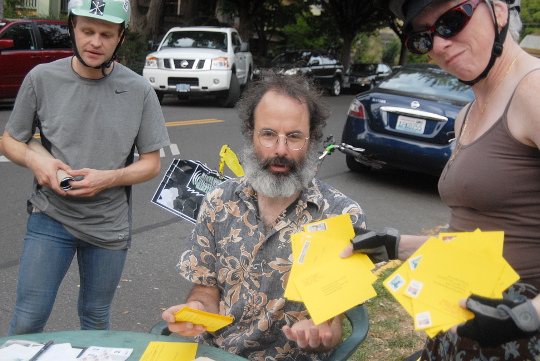 Portland’s newest bike advocacy organization is bringing back the postcard.

The documents, designed in Microsoft Word, are the brainchild of longtime bike advocate Ted Buehler, a volunteer for the new “gathering point for grassroots activists” that calls itself BikeLoudPDX. In an interview Friday, Buehler said he’s stamped and mailed about 150 each of the first two postcards and also some from the Rodney campaign, which had begun the week before. 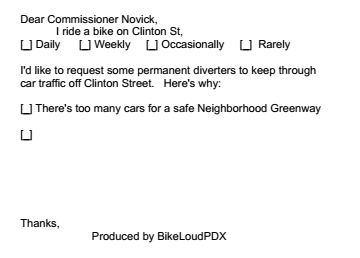 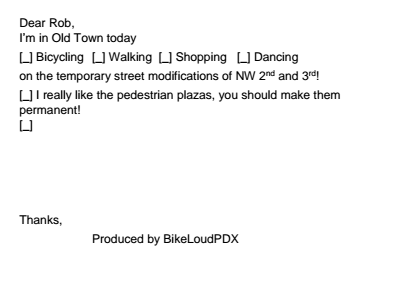 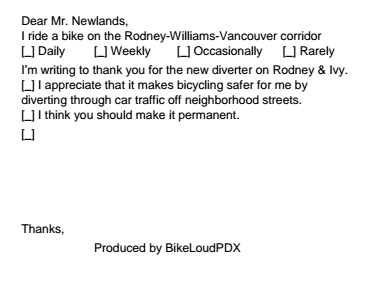 Buehler and other volunteers gather people’s opinions by setting up a table on the street in question and asking passers-by if they’d like to share their thoughts. He estimated that 90 to 95 percent of the people who’ve done so are people “out of the blue,” not members of Portland’s core bike advocacy network.

“We always engage people in conversation first, so there’s nobody who’s really doing it casually,” Buehler said. “Certainly the vast majority are interested in the topic and they’re not just going to sign their name to anything. … They’re on site, viscerally frustrated or viscerally pleased with the transportation system that they’re using.”

Greg Raisman, a PBOT staffer who works with city traffic engineer Rob Burchfield, said Monday that Burchfield had received the postcards about 3rd and shared them with colleagues.

“It’s always great to get feedback,” Raisman wrote in an email. “They will be a part of the discussion as we examine the important issues related to 3rd Avenue in Old Town.”

The campaign’s costs in paper, ink and stamps are mostly self-financing, Buehler said. 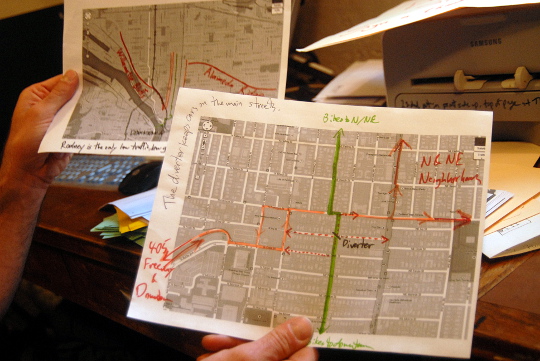 To help passers-by understand the issues involved, Buehler creates maps and has them on hand to help explain the significance of each project in the local system.

Buehler thinks the postcards are worth spending time on because they make the process of contacting a public official more concrete.

“In a digital media age, there’s something nice about having something tactile that you can write on with your own pen, sign it with your own name, put a smiley face on it if you want and drop it the mail,” Buehler said. “I think it engages people’s brains in a slightly different way and it probably affects the recipients slightly differently too. Instead of one more line in their email box, it’s a small, medium or large stack of postcards in their mailbox.”

Another aspect of the campaign: All the postcards are either thanking the city for something it’s done or asking to make a temporary measure permanent.

“I like mixing the positive and the negative, but I always find that the world’s kind of short on the positive side,” Buehler said. “Plus, we’re a new organization. Let’s get some warm fuzzies out there.”

“Personally, I’ve observed that Portland bicyclists really lack a grassroots – they don’t have confidence in their ability to be heard,” Buehler said. “They’re more fatalistic than idealistic, let’s say. And in the advocacy world, there’s known ways to change that.”

One of the ways, Buehler said, is to get them thinking about the fact that there are real people in city government who they can contact about their problems.

“They figure out that he’s their city commissioner and he’s in charge of transportation, and he’s our traffic engineer,” Buehler said. “And it starts getting people’s brains thinking in that direction.”

Email me at bikeloudpdx (a t) gmail.com and I’ll get you in touch with Ted! We aren’t tax-deductible FYI but we are very low-overhead (so far, only postage), huge bang for your buck 🙂 !

If y’all are interested, BikeLoudPDX has a Ride on Rodney on this Thursday 10/23! 4-6pm. Meet @ Dawson Park gazebo at 4pm or find the crowd and the tunes en route on Rodney (we’ll be riding back and forth).

We want:
*The diverter at Ivy & Rodney to become permanent
*Additional diversion / some other measure near of Tillamook & Rodney to allay the high auto volumes on Rodney during Williams construction.

The Williams reconstruction project has caused an increase in cut-through traffic on the new Rodney Greenway. The goals of this ride are to calm traffic and advocate for permanent diverters. We will meet at the Dawson Park Gazebo at 4 and 5 pm (two ride starts).

South of Cook the peak traffic on Rodney in August was the 5 PM hour with 176 northbound cars, more than twice any other hour of the day.

South of Alberta, Skidmore and Shaver in March there were no unusual or even large volume changes based on time of day.

There are no apparent changes south of Killingsworth from March to October 14th of this year.

Another BikeLoudPDX event on this Sunday 10/26: “Drinks and Diverters: Clinton.” 4pm at Imperial Bottle Shop, 3090 SE Division. Making a plan and proposal for getting diverters on Clinton ahead of 1st recent Richmond Neighborhood Association meeting on the topic on November 10th.

Has anyone reached out to PBOT to see what they’re looking at for Clinton?

Nope! Who would be a good person to contact?

From the web site:

The Active Transportation Division Manager is Margi Bradway at 503-823-5667 or email: Margi.Bradway@portlandoregon.gov

sharing conceptual plans probably has to be approved by the public information office.

Thanks!! I know it may seem basic, but knowing which group to talk to within a complicated government structure can sometimes get us novice activists going.

Art Pearce is the manager of Margi.

everything related to biking, walking, or driving less in portland is housed in Active Transportation:

What would be really nice would be an organizational chart. I’m still pretty unclear who is over what area, and what responsibilities they have. & that’s after taking notes at last week’s Bicycle Brownbag.

PBOT doesn’t appear to have updated the web site recently, even though some reorganization has occurred. the last org chart is from January 2013.

More accurately: not to my knowledge 🙂

And our main communication channel:
https://groups.google.com/d/forum/bikeloudpdx

Love the idea and the physical aspect of the postcards. Great insight Ted. Thank you Bike Loud members for your advocacy to date.

This is lovely 🙂 thank you to everyone who contributed to this!

Not to be a pedantic prick, but please change “there’s too many cars…” to “there are too many cars…”. Poor grammar just looks bad.
That out of the way, I wholeheartedly support diverted on Clinton. Thanks for getting this going.

Oops, that should read “diverters”

who is “Burchfield”? is that the “Rob” that’s referred to on one of the postcards? what do they do at PBOT?

Whoops, thanks. Rob Burchfield is the city’s top traffic engineer, so a big decider on traffic capacity, lane markings and width, etc. Clarity added above.

This is exactly what I did 15-16 years ago to create the political pressure to bring in funding for the Morrison Bridge sidepath project. On two occasions, I had 300-400 signed postcards mailed to Multnomah County Chair Bev Stein (to get the County’s attention) and then 6 mo later to Metro Council chair Rod Monroe during the MTIP process. In the age of e-mail, Twitter and FB, a simple postcard campaign can pack a lot of punch. Its great to hear that advocates are reviving the tactic for other projects. Good luck BikeLoudPDX!

Thanks for the story, Michael.

That white SUV looks ominous in the top photo. Tabling on Clinton St. was trying that day — tons of cars, lots of bicyclists with a “hunted” look in their eye.

If ya’all want to join the physical mail movement, it’s fun. Drop a postcard in the mail to your favorite public official, or about your favorite project, or most sought-after improvement.

Or just print out one of the three postcards we’ve been sending, and have your opinion registered with all the others.

This is a trick I learned from a lobbies many, many years ago. Forget the postcard they into a box and that about it. Instead write a letter, a simple letter that is signed is worth about 10,000 votes if I remember right. The best thing to do is to have a writer party. Have a place where there is some food and drink, some people that can type out a simple letter in a few minutes, get them to sign and stamp them, or boilerplate about 20 different paragraphs and then mix together to form a letter. Its simple as that.

I signed one of these! Good job, everyone.

Excellent article and great work to everyone involved at bikeloudPdx! This is a great group that is filling a much needed niche; we need active members from across the city. If you are the bike activist type that wants to work inside the Neighborhood Association system contact Alex to get hooked up! We especially need members from South Portland like Woodstock and Brentwood-Darlington.