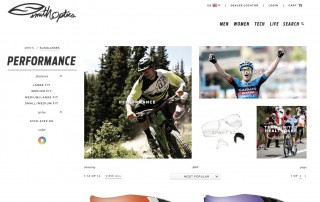 A significant chunk of global eyewear brand Smith Optics will move to Portland early next year.

The news was confirmed today via a story posted this afternoon in the Idaho Mountain Express newspaper.

Here’s more from the IME:

Safilo [Smith’s parent company] CEO Luisa Delgado came to Ketchum from Italy this week to discuss the results of the location study with Smith employees, local government officials and media, among others. Delgado announced the relocation plans today, Oct. 20.

As part of Smith’s integration within its parent company, it will be controlled out of the global Safilo Group headquarters in Italy.

Delgado said every effort would be made to either relocate or provide a severance package for Smith’s 85 Ketchum-based employees.

Portland, Ore., was selected out of several Western U.S. locations as the new design center for Smith Optics. Some 35 employees will see their Ketchum position transferred to Portland during the first half of 2015.

Smith Optics is well-known is cycling circles for their downhill goggles and full line of cycling-specific eyewear. Earlier this year, Smith expanded deeper into cycling with their Forefront helmet.

The company was founded in 1965 and has been based in Idaho ever since. Safilo, the part company is a huge Italian-based conglomerate that owns several eyewear and fashion brands including Fossil, Banana Republic, Hugo Boss, and others.

Stay tuned for more details as plans for the Portland-based office firm up.

Ugh, I can’t think of a worse place for a mountain biker to move from Sun Valley, ID than Portland.

They’ll be going from hundreds of miles of trail a 5 minute ride from their door to tens of miles an hour drive from where they live.

Agreed. Not to mention the hostilities there seem to be towards off road riding around here. It’s seems if you’re not a bike commuting martyr, you’re just not a cyclist.

No kidding…please check your mountain bike at the state line.

Chris I
Reply to  Zimmerman

A bit dramatic, aren’t we? You really can’t think of worse cities in the US? Have you been to Houston? Miami? New Orleans?

Zimmerman
Reply to  Chris I

Well, since you wondered:

Chris I
Reply to  Zimmerman

Yes, they have trails. I thought the big complaint was that you had to drive outside of Portland to get to any “good” trails, right?

Zimmerman
Reply to  Chris I

Regardless of the semantics, they’re going to have it worse than they had it in Sun Valley when it comes to mountain biking opportunities.

Well, I’m sure there are plenty of Portlanders happy to take the now-available jobs at Smith Optics if they are too good to move here.

I doubt many of them will be moving. Most people live in mountain towns because they like living in the mountains.

Smith makes all kinds of eyewear, not just mountain biking. And those employees will see a significant drop in cost of living by moving to Portland. Manufacturing will stay in Utah.

“significant drop in cost of living”….man, don’t know about that

I love my Smith sunglasses with 3 interchangeable lenses for road biking. I hope they eventually put in an outlet store!

Over years, Smith’s name has been very visible on goggles for skiing. Why the company chose Portland over other cities, for its design center, would be interesting to hear about.

We have a lot of outdoor gear makers headquartered here – not really a big mystery why a company would choose to relocate here.

That’s one reason. It would be interesting to hear from the company, Safilo, why it decided to move its design center to Portland.

Wow, I thought that Luxottica owned all the big optics brands. Good to know they have at least one competitor. Still, I’m sticking with Performance house-brand stuff for my sunglasses – same performance, no branding markup.

I’ve had many pairs of Smith sunglasses over the years and their lifetime warranty is great. Glad to hear they’re coming to Portland.

Having this company here may help advocates get some MTB trails established. I hope.

Potential for MTB advocates to successfully site trail for mountain biking could be good, outside of lands dedicated to serve as nature parks and wilderness areas. Whether Smith Optics has something to offer that would help in this effort, would be good to hear about.

I’m sorry, is there a wilderness area somewhere in the city of Portland we don’t know about? I haven’t seen any federal news regarding such a designation very close to the metro area.

What is the significance of a “nature park” designation? Powell Butte is a nature park with bicycle access. Does this distress you? I’m not well versed on the details that makes Marquam and Powell Butte nature parks while Forest Park is a regular park.

Getting off topic here, but number one problem certain mountain bike enthusiasts posting comments to bikeportland stories have, is that they’re unwilling to do so without being mean, nasty and insulting to people that differ with their desire to use Forest Park and other nature parks and wilderness designated areas, for mountain biking.

You may gain some insight on Forest Park’s unique status, through some study. Doesn’t seem at all that “…regular park…” accurately describes the park. It’s unique in numerous respects from those other parks you mention. Read the book written by the person the parks district hired as a consultant to research and study the history and ecology of the park: Marcy Houle.

Whether or not Powell Butte having bike access “…distress(es)…” me (don’t know much about that park.) is of much significance. What should be far more significant to mountain bike enthusiasts that would like to use Forest Park for mountain biking, is that support from Portland residents for the possibility of using the park for that purpose, appears to be minimal, at best.

Forest Park, being designated by some mountain bike enthusiasts as the primary target for urban Portland mountain bike opportunity, seems to be a losing strategy. Better chances for success may come from looking elsewhere, beyond that park, somewhere on some as of yet, not already designated land in the vast acreage of counties in the Portland Metro area, where it’s possible that more substantial support for developing mountain biking there, could be rallied.

That was a long winded avoidance of a simple question.

What is the significance of the “nature park” designation to you?

You’ve gone on a long tangent about Forest Park. I just used that as an example of a non-nature park, yet that appears to be your biggest objection. I thought you objected to MTB advocacy in “nature parks”. Powell Butte is a nature park and you couldn’t care less, yet “nature parks” were specifically cited by you as being off limits. I don’t get it.

By the way, in today’s Oregonian, there was an expanded story on some of the reasoning behind Safilo’s decision to locate the company’s design component in Portland. Story said the company has other design studios elsewhere in the world. Nothing specific in the story, about designing for any one sport over others.