The Bicycle Transportation Alliance (BTA) has announced this year’s crop of Alice Award winners. The awards, which debuted in 1995, are meant to put a spotlight on people and organizations “who have worked to make bicycling better in Oregon.” And new this year are a crop of ‘People’s Choice’ candidates that will be chosen online via the BTA’s Facebook page.

The Alice Award winners are: Kristin Dahl, Jenna Stanke, and the Regence Bike Commute Team. This year’s Emerging Leader Award goes to Briana Orr and the Bud Clark Lifetime Achievement Award has been given to Mike Cosgrove. According to the BTA each winner has, ” truly made an investment here in Oregon for healthier communities, for economic development, and for making Oregon a better place to live and ride.” (The theme of this year’s Alice Awards are “Investing in the Movement.”)

The People’s Choice Award will got to one of these three businesses: Hopworks Urban Brewery, New Relic, or VeloCult Bike Shop & Tavern.

The big awards celebration and fundraising gala won’t happen until May 31st, but the BTA announces the winners prior to the event in order to encourage more attendance (a practice they started with the 2011 edition).

Here’s more about each of the winners: Kristin Dahl
Kristin’s name and work should be familiar to regular readers of BikePortland. We’ve been covering her tireless dedication to Oregon’s bicycle tourism efforts for many years. Kristin is in charge of Sustainable Tourism Development for Travel Oregon and as such, she’s been instrumental in Oregon’s efforts to be the premier state for bicycle tourism. From the creation and launch of RideOregonRide.com to the recent bicycle tourism economic impact study, Kristin has been a constant presence. Through her work in leading Rural Tourism Studios, she has rallied enthusiasm for cycling in many smaller, rural Oregon towns. She’s even made several trips to Washington D.C. to participate in the National Bike Summit where she has shared Oregon’s example with advocates from across the country and informed our elected officials about the importance of bike tourism. 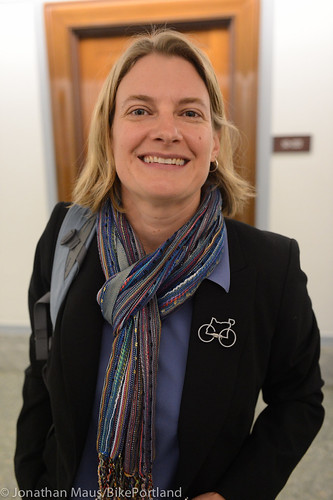 Jenna Stanke
Jenna Stanke is a dedicated bike advocate in the Rogue Valley and southern Oregon. She has been a leader in the development of the Bear Creek Greenway and is the recently appointed chair of the Oregon Bicycle and Pedestrian Advisory Committee. Here’s more about Jenna from the BTA:

In a region not traditionally know for being supportive of bicycling, she has been extremely successful in forging partnerships between organizations, governments and agencies around the area to develop active transportation facilities. As a dedicated bicyclist herself, she “rides the talk” and frequently commutes the 45 minutes from Medford to White City for work. Jenna has become the go-to resource for all things bicycling in the Rogue Valley region…

While the Regence Bike Commute Team’s work to support coworkers in riding to work and make their company’s facilities, policies, and culture increasingly bike-friendly is valuable in its own right, their work to create and host the Portland Employers Bike Summit has had phenomenal impact on the larger community. The Regence Bike Commute Team has poured the lion’s share of time and talent into the development of the event, as well as positioned Regence as a company that believes in bicycling through their full sponsorship of the event and related costs and the participation in the event by executive staff. Partners at the BTA, the City of Portland, and local Transportation Management Associations have all played roles in the coalition delivering the Summit, but having this business engagement effort led by a prominent company in the Portland-Metro area’s business community is immensely valuable. 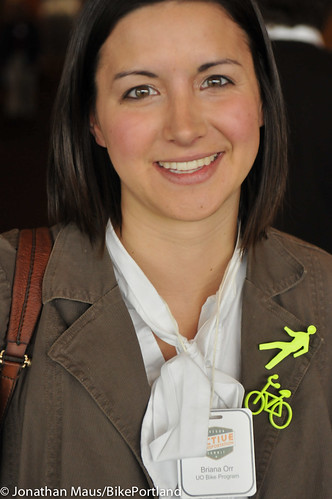 Briana Orr, Emerging Leader Award winner
Briana Orr is definitely a rising star in Oregon bike advocacy circles. She first made a name for herself by creating the Bike Loan Program while a student at the University of Oregon. We profiled that program in 2008 and it won her an award a year later. This past January, Orr found her way onto BikePortland again as the person leading the charge for a full-fledged bike sharing system on the UO campus. Here’s more about Briana from the BTA:

Bicycling has been a large piece of transportation to and around the U of O, but until Briana’s leadership, there was no organized entity that served and spoke on behalf of the campus. Briana’s work is incredible, and although only a few years out of undergraduate school, she is a major player in our region and is already connected with many bicycle professionals across the country. She is the epitome of an emerging leader in our field. 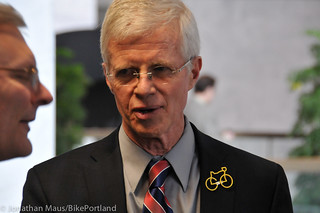 Mike Cosgrove, Bud Clark Lifetime Achievement Award
Mike Cosgrove has almost single-handedly put Grant County and the community of John Day on the cycling map. In addition to starting a youth bike education program, he has dedicated himself to establishing John Day as a gateway to many excellent riding opportunities. He’s created maps and brochures about riding in the area and he’s been a one-man bicycle tourism promotion machine. During the National Bike Summit back in March he was one of the most outspoken and effective members of Oregon’s delegation of advocates during the lobbying day on Capitol Hill. Mike is also a valued member of Travel Oregon’s Gravel Road Working Group.

Back in May 2012, we reported on how Mike brought in 50 people to a meeting about bicycle tourism in Grant County, making it, “as far as anyone remembered, the largest meeting to talk about bicycling Grant County has ever seen.”

You can learn more about the Alice Awards and about each winner at BTAOregon.org/alice. And don’t forget to vote the People’s Choice award via the BTA’s Facebook page.

Woohoo! Congrats Jenna! She does great work as the Bike/Ped Program Manager in Jackson County. Southern Oregon is lucky to have an advocate as passionate and dedicated as her.

Who all was nominated?