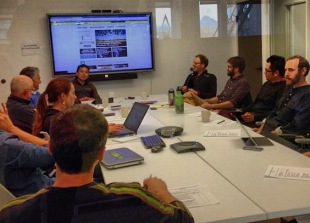 In the latest sign that gravel road riding is poised to be the Next Big Thing in cycling (just wait until you see how many major bike brands will offer “gravel bikes” in 2014), Travel Oregon (a.k.a. the Oregon Tourism Commission) convened an official working group yesterday to, “Create a strategy for promoting and further developing Oregon gravel riding network.”

As we’ve shared on a few occasions, Oregon is full of amazing unpaved roads through farms and forests that only a handful of people have ever pedaled on. Therein lies the potential of gravel riding (which is really nothing more than riding on unimproved/unpaved roads): It opens up hundreds of miles of new route options and adventures in every corner of the state.

With strong interest from this dedicated and experienced group, along with agency support from Travel Oregon, Oregon State Parks, and other partners eager to develop this untapped riding resource, the ultimate goal is to create Oregon’s first officially sanctioned State Scenic Bikeway that’s almost entirely routed on gravel/unimproved roads.

Some of the discussion yesterday centered around how to handle legal issues these roads might present. Many of Oregon’s gravel roads cross logging roads owned by timber companies, while others wind through wilderness and criss-cross lands managed by a host of county, state, and federal agencies. It was made clear that this group will focus only on routes that use publicly-owned roads and/or roads that are explicitly permitted by landowners for public use. We all agreed that outreach to private landowners and other land managers will be important. 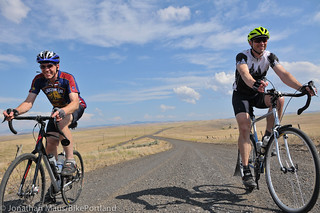 In eastern Oregon, big skies and (relatively) carfree roads
are just two of the gravel riding’s many pleasures.
(Photo by J. Maus/BikePortland)

The group also decided yesterday that the first course of action is to collect existing route data and compile a catalog of the state’s best gravel road routes. Members of the working group have already started submitting their favorite rides. Many of the routes will also be posted to Travel Oregon’s RideOregonRide.com website so anyone can learn about them and set their own course for adventure. Then, later in the process, a selection of these rides will go through a stringent vetting process (much like the process that already exists for the Scenic Bikeway program) and be considered as official State Scenic Bikeways.

Other goals discussed by the group include a signage system for these off-highway routes similar to what exists in the Dutch countryside and an education and outreach plan for rural residents and landowners along the routes.

This effort is just getting underway and there’s a lot of work to do; but it’s exciting to know that Travel Oregon is already taking the lead. Gravel riding could be a huge boon to Oregon tourism, helping attract even more people to our state’s many struggling (yet extremely charming) rural towns while offering a whole new style of for bike lovers near and far.

And through my Native Jefferson State gravel riding greatly improves your chances of getting flat tires thanks to goat head thorns. I couldn’t count the number of cyclists stopped off the side of the road on Cycle Oregon 2009 with flats while we rode through there.

If the typical Lycra Lance (as depicted in the photo above) insists on taking their silly little bikes and no equipment out into the gravel, I’d say they got what was coming to them. Anyone with experience knows that riding overland requires tools and tubes at the very least.

LOL, are you serious? They’re all wearing saddle bags and are riding cross bikes there, Negative Nancy…

Even though you are somewhat condescending in your remarks, cut them a little slack. They were only on a photo shoot! Anybody who chooses to “go the distance” in the outback will either be prepared, or end up as coyote bait! It is their choice, and all we have the freedom to do so.

Personally, I prefer not to end up as coyote bait and choose to go well prepared on my “silly little bike” as I ride far and fast. Don’t be so judgmental in front of your safe, dark, little computer hole. Get out a little more and live your life! Can’t we all just get along?

Perhaps you haven’t commented here before, but I don’t take kindly to name-calling or mean-spirited words. Thanks for understanding.

You might also like to know that the photo you refer to was taken during a ride that was fully supported by Phil Carlson, owner of Treo Bike Ranch in Hardman, Oregon.

We have a pretty good gravel riding network after winter storms, when all the bike lanes are buried in gravel.

YES. Hugely underdeveloped resource with practically no costs. Rural communities could stand to gain some business from this. I can’t tell you how many times I’ve stopped at gas stations and restaurants in The Dalles (I’ve stopped at Salmon Cyclery, too). That town is at the epicenter of a great cycling network that very few people have ever heard about.

The riding in The Dalles area is absolutely amazing. I did a ton of riding out there this past year. You can go hours without seeing a car. Great views. Cool old school houses and grain elevators. I don’t know if I have ever seen another cyclist out there (other than during the Oregon Stampede, of course). Plus, it is just a maze of gravel roads meaning the loop options are almost limitless.

I’d say always travel in pairs or more and file a flight plan before you go. If you get run off the road out there and injured or worse, it may be a long time before anyone finds you. Just the facts.

Hopefully someone starts making a steel frame for a taller rider (6’5″) that doesn’t cost an arm and a leg. I really want to find something that will work for commuting/cyclocross/gravel riding.

Dan
Reply to  Chris I

They are out there. Check out the Surly Straggler for 700c and Ogre for 29″.

jimbobpdx
Reply to  Chris I

Not sure what an arm and a leg is to you, but Mike Varley at Black Mountain Cycles in Marin County is a tall feller himself and puts together a mean cross bike. Right now his biggest frame is a 65cm. Check him out – great website, great bike guy!

The key to making this great will be in making it a true statewide network. Now there’s a great idea and what an excellent way to leverage our existing infrastructure!

Perhaps the branding should move away from word “gravel”. I know gravel is today’s buzz word but it’s not the gravel that makes it great, it’s the low car, off-paved, scenic nature of these routes that makes this kind of riding so popular.

I just moved here in May froom NH and I would LOVE to help explore and map any of Oregon’s gravel roads. I could take you on a bunch back in New Hampshire, but that took over 20 years of riding to find some of them. Now I am in the process of learning all over again.

I got a tiny taste of gravel riding this summer on Cycle Oregon’s “rest day” near Diamond. We decided to go on a short half gravel/half paved loop with a beer stop at the midpoint. At the junction one mile from the beer stop, my husband looked the other way and said, “Let’s go up that hill!” His Jedi powers made me say, “Yes, let’s pedal away from beer and climb a hill in the hot sun instead!” So the 6-mile gravel segment turned into many more miles of gravel up a hill and out a ridge and along a bluff and then back down the hill and it was a total blast! I’m hooked! Peaceful (only crossed paths with 2 cars, probably both related to Cycle Oregon), amazing scenery, totally fun. On gravel roads, you can ride side-by-side and have a civilized conversation. Or you can watch your husband speed up the hill while you slog and dream of the beer you’re missing. But it’s all fun! There are a bazillion miles of gravel roads in the state in all different terrains and landscapes.

In addition to the map concept, I’d like to see a lodging component. Since gravel roads abound in areas with few commercial hotels, it would be really helpful to identify bed and breakfasts, ranches with rooms for rent, campgrounds, and other overnight facilities along the way so you’re not limited to day loops.

The Oregon Outback route and ride is already planned. I didn’t see it mentioned anywhere, but check it out: http://velodirt.com/the-oregon-outback-a-360-mile-dirt-odyssey-across-oregon/ No affiliation with it, but it looks like a GREAT ride!

You don’t even need to leave Multnomah County to find some sick gravel roads. Oregon and Washington are littered with thousands of miles of well maintained gravel.

Love, LOVE L O V E this idea! So many riding options, so little time off from work. I second Martha’s idea of adding lodging options to the mix.

I will buy that map/app as soon as it comes out.

Really, it is soooo nice to ride relatively car free out in the rural east of the state!

If you are concerned with punctures from the thorny stuff out east (and you should be) there are good options…check this vid:

there are conversion kits for road/cross type tires as well…could be the future I’m thinkin’.

As much as I hate to admit it, I never won Trans Iowa. I have been the 3rd Place (TIv1) and 2nd place (TIv8) in the singlespeed class. Anyway, I love what Travel Oregon is doing to support gravel riding; this committee will do good work!

Gravel by butt. We don’t need no stinkin’ gravel:
https://www.youtube.com/watch?v=7iK2K160WyE