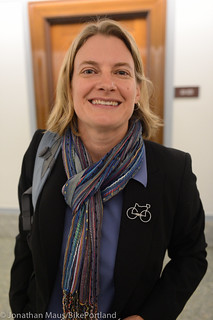 The Oregon Department of Transportation’s eight member, governor-appointed Bicycle and Pedestrian Advisory Committee (OBPAC) has four new members and a new leader at its helm. ODOT put out the call for new members back in January and announced their selections today.

The four new members are: Susan Peithman, formerly an advocate for the Bicycle Transportation Alliance (BTA) who now works as research and program administrator for the Oregon Transportation Research and Education Consortium (OTREC) at Portland State University; Evan MacKenzie, a city planner from Pendleton who is also an avid bike racer; Jeff Monson the executive director of Commute Options, an organization that promotes biking, walking and transit in Bend; and Salem resident Kenji Sugahara, executive director of the Oregon Bicycle Racing Association (OBRA).

The OBPAC has a big job ahead of it. As the only entity in ODOT’s organizational chart with the word “bicycle” in it, OBPAC’s role is to act as the voice of cycling within all transportation policy, funding, and project discussions. There’s an opportunity for this committee to provide meaning and inspired input and actions that can truly move the needle for cycling in Oregon.

Jenna Stanke, a member of the committee since 2009, has been appointed to a second term and will be the new committee chair. Stanke is a resident of southern Oregon and currently works as bicycle and pedestrian manager for Jackson County Parks and the Bear Creek Greenway. A source at ODOT told me this morning that Stanke, “brings a rural and trails perspective to the table, yet she understands how government works and is conversant in the larger policy issues facing bike/ped at the state level.”

This is a great crop of new faces at OBPAC and I can’t wait to report on their progress. Stay tuned!

— For more on OBPAC, read the farewell letter we published from its previous Chair Jerry Zelada.

Go get ’em, team. Thanks for your work!

Go Jenna! As a cyclist down here in the Rogue Valley, I can attest that she is an outstanding advocate for cycling — both for us “rural” types and all you big-city types.