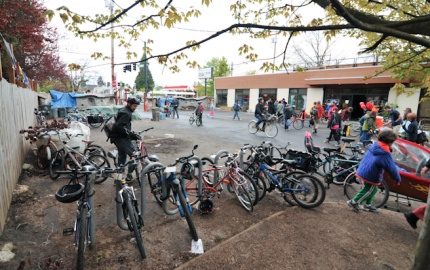 The lot in front of Trillium Charter School (which used to be used for auto parking, but cars are now prohibited) on Interstate, bustled with bikes this morning.
(Photos © J. Maus) 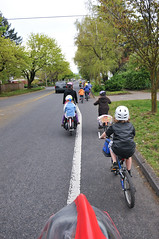 It’s been nearly one year since I happened upon my first “bike train.” Back then, I was amazed at how such a simple idea — parents and kids meeting up at designated spots to ride to school together — could be so effective.

This morning I joined the inaugural ride of my daughters’ school’s bike train and got to see first-hand why the concept is taking off like wildfire throughout Portland. 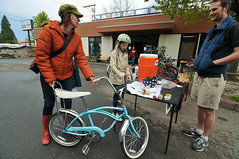 Kiel Johnson, fresh off his Alice B. Toeclips award, is the young, former City of Portland intern who runs BikeTrainPDX and single-handedly sparked a renaissance in bike trains (the concept has been in use for years).

Since hosting a conference last August, Johnson estimates the total number of bike train riders is nearing 2,000. He has also garnered national media attention (even a spot on NBC) and has consulted with cities across the country about how to set up bike trains of their own. 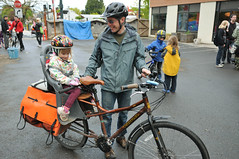 With a $5,000 grant from ODOT, Johnson gives each participating school $30 a month to spend on whatever bike-related thing they choose. “The idea,” Johnson says, “is to empower the bike train leaders to feel more involved and participate more in making decisions that work for their school.”

That’s the magic behind what Johnson has done. He simply had an idea and then let others grab onto it and make it their own. He has only a meager budget, relying on emails and grassroots organizing. 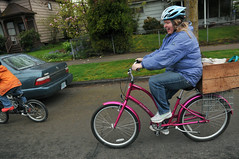 Fun for the parents too!

Johnson was waiting in the lot in front of Trillium Charter School this morning (a former car parking lot that we closed last year to create more bike parking and a school plaza) as parents and kids on bikes streamed in from all directions. Johnson stood behind a small table that had piles of free pencils, raffle tickets, and other goodies on it. He smiled and chatted with kids, administrators and parents. 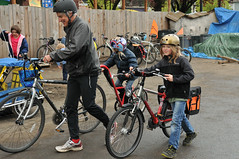 “The most exciting thing for me has been watching parents stepping up and getting involved with making biking to school a normal activity,” Johnson emailed me a few weeks ago, “There is a lot of energy and passion around biking to school and it is great to see people being able to channel it and feel ownership through bike trains.”

That energy is definitely happening at Trillium. Parent volunteers are now stepping up to publicize the bike trains, ask about Safe Routes to School grants, and inquire about nearby traffic safety improvements. It’s amazing what one simple thing can set into motion.

At this rate, Johnson is sure to run out of that grant money soon; but something tells me he won’t have any trouble finding more.

If you want to start a bike train, just drop Johnson an email at biketrainpdx[at]gmail[dot]com.

Kiel shows us how to get a whole lot done with meager resources. You cannot deny the awesomeness of a bike train in action.

Such a simple idea, yet so effective. Honestly the scariest thing is riding down a busy road and you’re the only bike on it. Any method that we can use to increase visibility we need to take advantage of.

What a great turnout we had despite rain starting right when parents were getting ready to walk out the door. If any Trillium Charter School parents or neighbors would like to walk or bike to school with kids and other parents, especially to join one of the four fun bike trains operating on Mondays during the month of May, please contact us at: walknbike [at] gmail [dot] com!

Wilsonville’s Bike Trains are starting up this Wednesday!! Thanks to Kiel for the inspiration.

Patrick, that’s AWESOME. It’s nice to see stuff like this happening out in the southern suburbs, which typically aren’t considered “bike friendly”.

Nice article Jonathan! Great to see all the biking going on at Trillium. You forgot to mention the tall bike one of the high schoolers rode to school. I’ve never seen that before.

Three weeks ago, I lead the first Bike Train ‘departure’ for Harvey Scott! The day before, I counted 3 bikes at the school bike rack. The morning of our bike train, there were 14 bike riders!
Thanks to Kiel and his amazing idea and leadership, this program should do well!!!

I rode with the Emerson biketrain from North Portland to downtown today and we had 7 riders. We will ride every Wednesday until the end of the school year. Meet up is at 8:10 off of Interstate across from Kaiser.

I will ride with the Portland Village School biketrain this Friday, and every Friday until the end of the school year. Meet up at 8:20 at N Ainsworth @ Concord. Another leaves near Columbia Park.

Keep up the good work, Kiel!

This February, thanks to Kiel’s inspiration, we started a small Bike Train on Wednesday mornings at Lewis Elementary in Southeast. You can see our route map and stops at http://bit.ly/lewis-north-bike-train . It’s had its ups and downs in terms of participation, not helped by this springs weather. We are hoping to get a parent volunteer to start a second one coming from the east side of our school.

Thanks again Kiel for the vision and inspiration!

Awesome! MLC (K-12 alternative magnet school in NW Portland) has had a daily “bike bus” since 2008. I like their little video about it: http://www.portlandonline.com/transportation/index.cfm?a=259263&c=50052