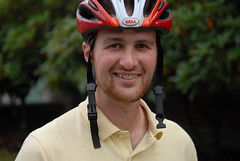 Few things excite me more than being able to introduce a new activism effort and then see it take off. A few weeks ago, we shared the news that 24 year-old Portlander Kiel Johnson (pronounced “Kyle”) was coordinating a conference on bike trains. (Bike trains are simply group rides where parents and kids meet up and ride into school together.)

Kiel, fresh off an internship with the City of Portland’s Safe Routes to Schools program, is passionate about how bike trains can encourage more people to bike to school. I’m happy to report several exciting updates on his efforts… 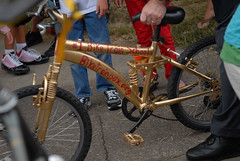 This Golden Bike will go to the
school with the most bike
train participants.

At his conference, Kiel signed up six local schools that now have bike trains running at least once per week. The schools are Beach, Sabin, Beverly Cleary, Abernethy, Buckman, and Creative Science. Each school has its own page on the BikeTrainPDX website which lists ride meeting times and locations on a Google Map.

On the first day of school at Beach, 53 riders participated in the bike train. 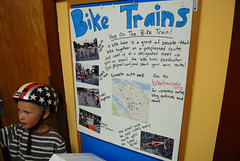 One of Kiel’s posters.

To keep up with his work, Kiel has applied for funding through the Alliance for Community Traffic Safety’s (ACTS) mini-grant program. Johnson hopes to win a $5,000 grant to help sustain his effort, purchase prizes and marketing materials, and to compensate a Bike Train Conductor position for the entire school year.

And last but not least, after our story back in August, a local producer working on a project for NBC television got in touch with us. NBC is set to air a new show next season (premieres mid-October) called “School Pride” which is sort of like Extreme Makeover for schools. NBC is doing a series of promos for that new show called “Heroes of Education” where they highlight individuals making a difference. The local producer connected with Kiel and now NBC is flying him to Los Angeles to film an interview!

Kiel says the point of his work is to find advocates at each school “The main focus of doing this for me is building a community of biking champions at each school. Bike trains do this by creating a role for those champions to step into.”

This is great progress and we can’t wait to share more about Kiel’s future efforts. For updates, check out BikeTrainPDX.org.

Going a step beyond readability…

What great news! Five grand should be considered a drop in the bucket, considering how these kids are being guided down a lifetime path of conscious commuting.

And now a word from the curmudgeon: I got stuck behind a bike train today coming down Lincoln just above 20th, and they were taking up the whole lane, moving at slow walking pace, making it difficult/impossible to get by safely (for me and for them).

They also corked SE 20th…is this really the best way to implement this? Wouldn’t smaller groups be better?

This is so cool! Wouldn’t it be great if you could get rid of buses all together and have bike and walk trains to schools? (obviously bus services would continue for those that can’t ride or walk) Think of the win win… kids get exercise (fighting the problem of obesity) and schools save TONES on buses, fuel, maintenance etc. Also having volunteers and folks from the community guide and show the kids the safe way to ride we’d prevent injury to kids and foster bike friendliness in the next generation. I like!

Kiel rocks!! I hope the trip to SoCal goes well.

Yesterday a parent at Beach told me how she met fellow parents she did not even lived in her neighborhood just because they were out of their cars.

Hey Dan, Hawthorne is a few blocks north and Division a few south. Both of these are better routes for you than a bike boulevard.

Kiel, this is great. Keep up the good work!

This is great news that someone is organizing the effort to get Bike Trains at more schools! It removes one more excuse of why someone would not let their child ride a bike to school.

To be clear, I was on a bike. It’s true that Hawthorne and Division are manageable when westbound (i.e., it’s possible to keep up with auto traffic pretty well), but I still prefer Lincoln for the lower sketch factor.

I’m all for kids biking to school, but is it really necessary for the bike trains to use the full width of the lane?

“… I got stuck behind a bike train today coming down Lincoln just above 20th, and they were taking up the whole lane, moving at slow walking pace, making it difficult/impossible to get by safely (for me and for them). …” dan #3

Kind of like getting stuck behind a big yellow school bus, minus the suffocating diesel exhaust and the massive visual barrier posed by the bus’s hulking passenger compartment.

I would have thought though, that bike train escorts would have had the kids ride single file in the bike lane, and when lacking one, to the right side of the lane when conditions advise that to be the safe option.

This is such a great project, it goes leaps and bounds beyond just “getting there” and really gets the school day started off well. I’d enjoy hearing how youth who cycle to school vs. those who don’t perform in class. Nothing like getting the blood moving and burning off some steam before the start of school.. my guess is their teachers will be ecstatic about this.

Kiel has been a key factor in motivating and teaching families how to bike safely to school at Beach. Bike trains educate parents how to bike safely with their children while also teaching them safe biking routes to school. When kids ride on a bike train they are learning the rules of the road. It is a weekly bike education class. At the same time everyone feels part of a group and everyone is starting and finishing the school day with exercise. It is a win-win situation.

Hey Dan, sorry that you got stuck behind the train today. It was our first time trying out the bike train at Abernethy and we got a much higher turn out then expected. At each stop we asked people to ride two abreast so people can pass but it became difficult to enforce that with a large group of kids.

I agree that trains that range from 10-15 is the best size. The one to Abernethy was almost 30 today, which is very impressive given that this is the first time we have ever done a bike train there, but we appreciate your patience while we work out the kinks to make it safe for everyone.

There is some talk of adding a route down Clinton, this might reduce some of the strain of riders going to Abernethy from Lincoln. As far as your concern about”corking” 20th if you have any other suggestions for making this crossing I’d love to hear them.

This isn’t good for child psychologists…ha!Good on ya Kiel!

Dan has a point that some drivers are going to view bike trains as a delay.

The trick (as pointed out by wsbob) is going to be to get them to recognize bike trains as the equivalent of school buses, and accord them the same patience and respect.

For some reason, I didn’t realize until visiting the website, that the bike trains only run one day a week at each school.

Not that there aren’t good reasons for it, but info on the website doesn’t really explain why the bike trains run only run one time a week, or why there isn’t at least one escorted return ride after school(the site explains pm rides aren’t scheduled due to it being “…too difficult to consistently coordinate with after school programs, etc…)…”.

Seems like kids would probably be up for riding at least 3 days a week, maybe everyday. The weather is what I would think could be a major wrench in the works. Having a bunch of wet kids arrive at school in the morning could be a challenge.

Kiel Johnson is a rock star in every way but the attitude. This is such an inspiring story.

Hey Kiel, thanks for chiming in. Sound like you are giving the right advice (ride two abreast), but I appreciate it might be hard for kids to be consistent. Also, I do think that a smaller group with 10 – 15 riders in the bike train could share the road better with other users.

Just brainstorming here: I don’t know if the bike trains assemble at a meeting spot, or “pick up” new riders along the way like a school bus. Maybe once there are 5 kids in the train (I’m assuming 1 or 2 parents with each kid), it goes straight to the school without picking up more kids? Or, if they assemble at a central spot, maybe move out in small groups with 2 or 3 blocks in between.

It might also help to have parents/adults ride on the left, kids on the right. That should improve visibility when sharing roads with motorized vehicles, and might help keep kids from wandering too far out into the lane.

Corking 20th doesn’t seem like a concern to me if the groups are smaller / quicker to pass than what I saw this morning.

Nice work Kiel!
My 2cents… I’m a Sabin parent; my son and I bike and walk to school most days. Oddly, I had no idea this happened at our school today. The route on Going is too north of the school for us. Shaver St. runs down the center of the neighborhood and dead ends right at the school. I suppose there is no perfect route. But, I am curious how the routes are chosen.
Again, I applaude your efforts!

I was also behind this train going down Lincoln today. It did appear that small groups waited at certain blocks to join the ride. I typically like to ride fast on the way into work, especially after coming down Tabor. I must say, I really enjoyed interacting with this train this morning. It put a huge smile on my face in addition to making me feel faster than Cavendish. Keep it up, I wouldn’t mind seeing more of this in the future.

Instead of corking have all of your bike train folks “transform” into pedestrians for difficult crossings. You have the legal right of way, it is actually faster (I have experience trust me), and you teach those kiddies a valuable bike/traffic skill. TRANSFORM!

jocko (#20) I love your comment–and it is so true. I have experienced this many times.

Totally awesome, I’m looking forward to seeing this idea refined and expanded upon. I hope everyone out there can exercise a little patience for the kinks to get worked out of what is obviously a highly worthwhile program, being spearheaded by someone who appears for all intents and purposes to be very open to suggestions.