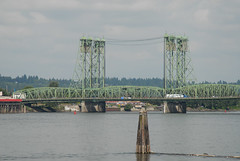 How about some alternatives?
(Photo © J. Maus)

Tomorrow, Metro councilor Robert Liberty will host a panel discussion on alternatives to the currently proposed Columbia River Crossing project. In announcing the event, Liberty said that given the “serious financial and political challenges” the project currently faces, it might be feasible to come up with some alternatives to the $2.6 to $3.6 billion proposal that’s currently on the table. 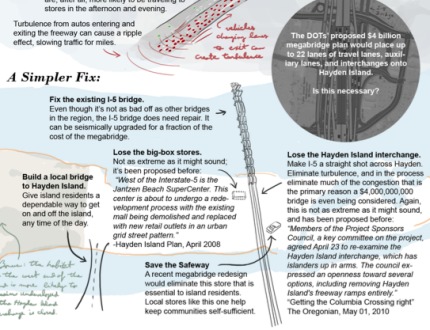 With that in mind, Liberty’s office gave us a sneak peek at some of the proposals they’ll be discussing tomorrow. There are 14 alternative proposals in all and they run the gamut from full design proposals to ideas about how else our region could spend billions of dollars on transportation.

Among the recommendations of citizen activist Spencer Boomhower (whom you might recall as the guy who created the popular animation of the Idaho Stop Law and who has contributed to BikePortland in the past) are to just fix the existing I-5 bridge (not replace it), get rid of the Hayden Island interchange (it causes “turbulence”, which leads to congestion), and demolish the big box stores at Jantzen Beach Supercenter.

Architect George Crandall of Crandall-Arambula will give a presentation at the event. He calls his proposal the “Future Worthy Alternative.” Like Boomhower, Crandall also calls for fixing the current span and bringing it up to current earthquake standards. In addition, he’d build a new bridge solely for light rail as well as a new rail bridge near existing BNSF rail bridge that’s west of I-5.

Detail of Will Macht’s proposal

Bob Durgan of Andersen Construction has a proposal called the Bi-State Industrial Corridor. He wants state officials to take the opportunity to rebuild the CRC and combine it with the need to replace the BNSF railroad bridge. In its place, Durgan would build a multi-modal bridge that would work better for freight and trains, while having additional capacity for cars, trucks, BRT, and biking and walking.

These are just some of the proposals that will be discussed tomorrow. In case you’re wondering, Liberty’s office says the panelists at tomorrow’s event “will not endorse a particular proposal but illuminate the strengths and weaknesses of each alternative and its elements.” Sounds interesting.

I’ll update this post after the event with a PDF so you can view more details on all the alternative proposals. Check the event details below:

Panel Discussion on Alternatives to the Current CRC Proposal
7 to 9 PM – Tuesday September 14, 2010
Portland Building auditorium (1120 SW Fifth Ave)
The event is free and open to the public. Space is limited.

they have talked about making a bridge from the top of the marine drive overpass to the west side of the island for trucks. this depends on if they let them onto the wetlands….

For those that can’t make it, the meeting will be broadcasted live on Comcast cable channel CityNet 30 and replayed various times throughout the next week by Portland Community Media.

Is this going to be sans public testimony?

Thanks to Mr. Liberty and others for putting this together.

I’ve been to about 10 Bike/Ped Advisory Committee mtgs for the bridge, and am unimpressed with the bike/ped facilities.

Road width and other factors aside, the route is pretty miserable for a key route connecting two parts of a metro area.

On the Oregon side,
* there’s no improvements to N Denver, Interstate, MLK, or anything else. The only way you can bike from urban Portland to where the CRC project begins is on a high speed, potholey truck route.

* lots of zig-zags trying to get over to Hayden Island. And road crossings. Not a thoroughfare.

* Path is only 16 feet wide, 24 feet was recommended by the committee.

Washington side —
* 4-block long spiral ramp, drops you from 60′ elevation down to the riverbank. While the freeway traffic shoots straight north. Bicyclists are penalized for their mode choice with a circuitous route and a wicked hill.

* no thoroughfare connection to anywhere but downtown.

Overall, if you want to ride your bike from Portland to Vancouver, you’ll have a huge penalty in time and energy riding on the bike route compared to riding on the shoulder of the freeway. Bikes deserve to be able to get across the river on a route as direct and straightforward as cars.

ted-
why not take your bike on the max and avoid all that?

you didn’t ask me, but I’ll share my thoughts.

I’d rather bike because it’s free, I can stop whenever I want to take in the view, and because I never have to wait for a train to show up.

Jonathan’s last point is one of the best – in an era where every 6-12 months Tri-Met is raising fares and cutting service, why do we want to keep taking MAX?

Because it’s faster than taking a bicycle and a lot cheaper than riding?

I’d not want to interrupt a bike ride by riding a streetcar (or bus) across the i-5 bridge for two reasons:

1) transfers burn a lot of time. You’d need a pretty awful approach to the bridge to eat up a 5-10 minute wait for a streetcar or bus.

2) my xtracycle won’t fit on a bus bikerack, and is too long to fit onto one of the bike hooks on a streetcar.

Another reason: What if Tri-Met decides to ban bikes on MAX one day? Plus, those trains only have space for eight bikes at a time. Riding across the bridge is faster than waiting for two, three, or more rush hour trains to get an open hook.

Plus we know from Tri-Met’s own official statements (http://www.bikeportland.org/forum/showpost.php?p=24155&postcount=9 and others) that they are only interested in accommodating “normal” bikes and only within their convenience not ours, the public that rides public transportation.

I live in North Portland, attend classes at PCC Cascade and Sylvania, and work on St. John’s Rd in Minnehaha (Vancouver, past Clark College). I commute by bike full-time. I can say from experience that biking is much faster and cheaper all over Portland/Vancouver. C-Tran has ridiculous wait times for connections. Tri-Met has too many stops and too many riders with bikes. During peak travel times, it becomes impossible to get a bike on a train or bus, making the commute time 3 or 4 times longer than just riding a bike all the way to the destination.
Riding from downtown to Vancouver takes an hour and looks like this:
Steel Bridge to N Williams
N Williams to Rosa Parks to Interstate
Interstate to N Victory to Delta Park
exit Delta Park to I-5N bike path
Bike Path to Jantzen Beach
Sketchy off-ramp crossing at Hayden Island Interchange and then wait for signal to get back on bike path crossing I-5 bridge.
N end of I-5 bridge, loop around under bridge and up Columbia Street to downtown.

One day the Regional Sales Manager for Trek Bikes asked to follow me because he didn’t know the way. Upon arriving in downtown Vancouver he thanked me for guiding him, stating that he never would have figured it out on his own and it would have made his commute too long and contrived to be worth not driving.
Go figure.
Also, wrong-way traffic on Interstate Bridge is dangerous and frustrating.

The meeting will also be streamed live on portlandonline.com @ 7pm by Portland Community Media. Search for “CityNet 30” and follow link.

As hinted at by Brad (#9), the bike racks on MAX are often full. As an eastsider who commutes to Beaverton I know this all too well. I started missing so many trains this summer that I’ve finally taken to driving with my bike to Hillsdale or Multnomah Village, and riding to Beaverton from there.

Even without the uncertainty of knowing whether you’ll be able to get ON the next train, it’s still pretty absurd to spend minutes waiting for the next train and deal with the hassles of getting on and off. Even with the circuitous routing being talked about here it’s usually going to be easier to bike the whole way than to multi-mode your commute. But it’s far less convenient than it could be.

I have lived here for FIFTEEN YEARS, and worked on Swan Island for 13 of those years, so I know all about the traffic jams. This CRC Project has been in the “Planning Stage” this entire time, and we have wasted $100 million ‘planning’ this fiasco. Lets quit talking and start DOING.

P.S. There are no hooks for bikes on Streetcars, only on Light Rail Vehicles.

Good answer Jonathan. thanks for responding

A little late, but it hit me, today, my answer to “Why not take your bike on the MAX?” Because I generally prefer the dignity and independence of transporting myself under my own power, vs. being transported by someone else like a helpless invalid. I can go where I want, when I want, and stop when I want. For free. I don’t have to listen to auditory clutter (“doors to my right, puertas a mi derecha”). And my body continues to get stronger. It kind of breaks my heart to see bikes on the MAX. Those bikes are for RIDING.

Also, everyone sort of seems to be talking as if MAX goes to Vancouver. It doesn’t. Their voters shot it down, ‘member? Because of a fear-mongering campaign, I seem to recall. “Stop the crime train!” So now they still only have a crime bus.

There is a very large, very stupid hick population in Clark County that hates every kind of mass transit. There needs to be some way to force the light rail/C-tran upgrades/bridge rebuild through without a popular vote, otherwise the rednecks over here will never let it happen. Mausy, please don’t censor this post–I live here and I know these people.

Roland, I share your enjoyment in getting somewhere under my own power. But — sorry it breaks your heart — I have no qualms about a little help from MAX in getting over the West Hills a couple times a week.

Those bikes are STILL being used for RIDING — even when I hitch a MAX ride, I’m still clocking 6-7 miles on my trip to work in the morning. But the westbound trip takes me 45-50 minutes instead of of 1 1/4 hours. In the morning when time is tight, I don’t always have the extra half hour to ride the entire way. I figured out about 15 years ago that the bike/transit combo is usually faster than either mode alone. FWIW, your heart will be happy to know that in the afternoon I usually do ride the whole way.

I’m just making the point that the West Hills are a major barrier, but also that the Columbia River needn’t be. We should be designing the bikeway across the river such that it DOESN’T force riders onto transit. Assuming a MAX train eventually runs across the river. Which, as you pointed out, is NOT the case today.

An interesting improvisation that was done @15 years ago has been ignored since–while a repair was being done to the Interstate bridge, a commuter passenger train was run on the Amtrak/freight tracks. It was well used during the time of that work and was liked by those who used it. The train tracks run across the Columbia River Slough bridge to the west of the Interstate. Nobody has ever talked of how a service like that could be maintained and fit into and around freight and Amtrak schedules.

Are the presentations posted online anywhere? Was there any real news coverage of these alternatives?