The Springwater Corridor Trail will get some much-needed TLC this summer.
(Map of project boundaries courtesy of the City of Portland)

If you’re one of thousands of Portlanders who ride on the Springwater Corridor Trail, you’ll be happy to know that — thanks to federal economic stimulus funding — the entire length of the trail (not on the riverfront) in the city of Portland will be repaved.

The $1.8 million for the project was approved yesterday by the Metro Council and it comes out of the $38 million they received from President Obama’s federal economic stimulus package (I’ll have more on Metro’s stimulus spending next week. Hint: They did much better than ODOT). 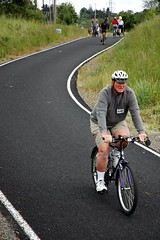 A view of the trail west
of the project area.
(Photo © J. Maus)

The trail in this section is in dire need of help. Weather and time have taken their toll on the surface and it has become very bumpy and uncomfortable to ride on.

According to Portland Bureau of Transportation project manager Kyle Chisek, the project will repave the Springwater from the Union Pacific Railroad bridge near McLoughlin Blvd., all the way east to the Gresham city border (at Jenne Road/174th). Here’s more about the project from Chisek:

“The current project will provide new surface by either grinding and replacing chipseal with asphaltic concrete or providing overlay. The existing trail width will be maintained with minor improvements to bollards, signs, striping, shoulders, adjacent vegetation and intersections.”

If all goes well, crews could start the project this summer and it should be finished in “a couple of months”.

Ironic that this news came on the same day that the 12 lane CRC got pushed forward another step.

How about paving the last little section while they’re at it?

Welcome news. Hopefully they can accomplish the repaving without creating lengthy detours for trail users.

The section between the Hawthorne Bridge and Omsi needs repaving also

“Springwater on the Willamette” is the name of the section along the river.

Hooray! Cyling facilities in East Portland gettin’ some love! This and the new bike lanes on Holgate will be welcome improvements for the area.

YES!
There are some crappy sections in there.
When you hit the trail right after 82nd, youre like OMG its so nice. I cant wait to feel that way about the majority of the trail.

Right now, you can feel where the old rail ties were before the asphalt was laid. This is going to be a much-needed improvement.

@Nicholas #2 – that unpaved section is Clackamas County’s responsibility, I believe. The section being repaved with this project is all in the City of Portland.

Wow. I really didn’t think this was ever going to be done.

What will it take for Clackamas Co. and ODOT to pave the last section?

nuovorecord @8
“that unpaved section is Clackamas County’s responsibility, I believe. The section being repaved with this project is all in the City of Portland.”

Actually, based on the map with this story, part of the yellow section is in the City of Milwaukie, part is in Clackamas County, and the rest is in Portland (I think).

Not sure what implications this has for whether Clackamas County can work on portions further east. I think that Portland Parks and Rec has responsibility for maintenance of some of the Clackamas County and City of Milwaukie portions.

Outstanding! I had begun to avoid the Springwater because of the pavement conditions.

Yippee, time to get out the rollerblades!

Sweet, I was always annoyed by the fact that Gresham’s section was smoother than ours!

Yes! I also avoid this trail because it feels like riding on velcro. Major wheel-suck, and really bumpy. Harder to fix the trail’s other problem, that it is so broken up by street and driveway crossings. But a new surface will be a great improvement.

This is great news! I hope that they put in a kitty-corner bike cross at SE Bell Ave & SE Johnson Creek Blvd, similar to the intersection of Interstate and Oregon just south of the rose quarter.

I thought that since bikes were such “light weight” and don’t ever do any damage to the roads, they would never have to spend money repaving the parts of the road where bikes travel. Is there a need for bicycle user fees? Registration? Should bicyclists pay for the resources they demand?

#17
Since this is federal stimulus money and all of us pay federal income tax, I think it’s fair to say that bicyclists are paying for the resources they demand. However, despite what appears to be a snarky tone, you have a semi-valid point. Some day, if bicyclists become so popular and cars so rare that automobile taxes/registrations/etc. and regular federal transportation dollars weren’t enough to cover the costs of maintenance on the roads that cyclists use (which would last longer anyway due to the reduced wear-n-tear) then we as a society would have to look for other ways of tending to those resources.

But I don’t see that happening for quite some time.

I know of many bike trails in the metro area where rough conditions have pushed riders out onto the highway and away from the cracks, holes and ruts. This is particularly true for the road bike clan traveling at high speeds with high pressure tires.

I’ve often wondered about the paving specifications for bike trails. My guess is that they are spec’d for expected weight loads. This may not be sufficient or adequate to suppress the buckling of the surface from nearby plants and roots. The Willamette westside trail is a good illustration of this; the pavement is not that old and was laid very smoothly but it is now nearly unrideable. The Tyron Creek trail buckles very quickly and is soon avoided by riders who opt to take their chances with the nearby 45 mph Terwillager Ave. Many other trails, like the ones near Forest Grove where the fatal accident occured in the roadway several years ago, are in such poor condition bikes routinely choose the nearby high speed, smooth alternative.

I hope someone is looking into what kinds of construction specifications or techniques are required to prevent bike trails from experiencing very short paving lifespans due to surface upheaval from plants and water.

Sweet, now if they’d do something to take away the fear of getting jumped riding between johnson creek and 82nd when it’s dark. That’s a pretty sketchy part of trail after dark.

Sorry to disagree, 2 millions could not be spent on new trails?, I just rode the whole length from Omsi to the end of Springwater past Gresham on my aluminum racing road bike and did not think it was too bumpy, are we a bit too soft to ask that a low speed multiuse trail should be perfectly paved?
How about connecting the missing pieces of Marine Drive, and I am sure that there are a few other spots that could use that kind of money.

Paolo is right. they should finish connecting the trails

Is rebuilding the bridge/trestle over Johnson Creek at the east end of Powell Butte part of this price tag?

This price is double what Gresham transportation engineers estimate 8.5 miles of paving should cost. Perhaps efficiency and fiscal responsibility are the reason the Gresham segment is nicer???

P.S. Why is Metro paying for only the Portland segment? The comments related to finishing the trail or completing connectors are valid. $1.8M is a lot to spend on something that could be more important regionally.

P.S.S. I ride the whole thing each day and will greatly enjoy the smoother commute.

Just rode out to Boring and back on 5/16.
What is the trail distance from Ivon to Boring? (I forgot to look ar the mileposts out on the east end.)
The unpaved part was rough, but doable on my Nishiki mountian bike – 700×38 knobbies.

@ 21: try riding on a mountain bike! you’ll realize your effort is completely absorbed by your shocks! how can i get out to powell butte w/o wasting all that energy! repave it!