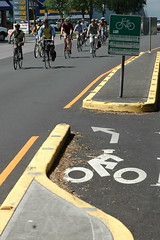 Bike boulevard infrastructure, like
this bike turn median in Southeast
Portland, will get a major funding
boost thanks to a Metro committee.
(Photo © J. Maus)

Yesterday was a big day for Metro and for non-motorized transportation advocates around the region.

Between decisions on how to spend funds from the federal stimulus package (I’ll report on that separately) and their “regional flexible funding” program, Metro Council and their Joint Policy Advisory Committee on Transportation (JPACT) doled out over $123.6 million in transportation projects.

Of that money, a record amount was approved for bike and pedestrian projects. From the regional flexible funds pot, Metro awarded over $10 million to bike/ped projects — nearly half the total amount allocated.

So, where did all the money go? Here’s a list of the marquee bike/ped projects (descriptions taken from Metro.):

NE/SE Twenties Bikeway: Lombard – Springwater Trail – $2,097,850
This bikeway will run north-south and when completed it will be a 9.2 mile corridor. 5.5 miles of that will be developed as a bike boulevard (the rest will be striped with bike lanes). The runs along NE 27th from Lombard to Ainsworth, NE 29th from Ainsworth to Knott, NE 28th from Knott to SE Madison, SE 27th from Madison to Stephens, and SE 26th from Stephens to existing lanes south of Woodward. This bikeway will also pass within one half mile of nineteen schools.

Westside Trail: Rock Creek Trail – Bronson Creek Trail – $2,399,337
This project will fund design and construction of a ten-foot wide, paved multiple-use trail. This is just one piece of the Westside Trail that will eventually be a continuous corridor from the Tualatin River north to and east through Forest Park to connect to the Willamette River Greenway and 40-Mile Loop Trail.

Kerr Parkway Bike Lanes: from Stephenson to Boones Ferry Rd – $1,742,926
This project will add bike lanes to Kerr Parkway in Lake Oswego. Adding bike lanes along this road will complete a link in the network of bike facilities in the area.

Red Electric Trail: SW 30th – SW Vermont – $1,929,183
This project will provide pedestrian and bicycle improvements in the Hillsdale town center area of SW Portland. Segments of this trail will include bike boulevard treatments and some off-street trails.

OR 43: Arbor Dr – Marylhurst Dr (in West Linn) – $3,800,097
The project will consist of many roadway improvements (widening, medians etc..), but will also include eight-foot sidewalks, fourteen-foot plant strips, and six-foot bike lanes on each side of highway 43 between Marylhurst and Arbor Drives.

*I regret the error, but the two projects above were not funded in this cycle. Sorry for any confusion.

French Prairie Bridge: Boones Ferry Rd – Butteville Rd – $1,250,000 (in Wilsonville)
This project involves the planning and project development of the French Prairie Bridge, which will be a multi-modal bridge crossing the Willamette River (it will be bike/ped only, but will be open to emergency vehicles when necessary).

Council Creek Trail: Banks – Hillsboro – $218,044
This project involves planning work for the Council Creek Regional Trail that includes a Forest Grove to Banks section… this trail project intends to reduce the multi-modal gap in this corridor. The corridor extends from the City of Hillsboro, through Washington County, the City of Cornelius, City of Forest Grove, to City of Banks, connecting to existing Banks/Vernonia State Trail and Stub Stuart State Park.

Now. Read that list again. These are not proposed projects. This is for real. This is not a drill. (Metro Council still must sign off on it, but they are very unlikely to disapprove, so says the BTA’s Michelle Poyourow).

This is nothing short of a major step forward in the completion of a regional network of trails and “mobility corridors” (a word Metro is keen on these days) and it sends a clear signal that Metro is moving toward a future that is very friendly to non-motorized travel.

I’ll have more about Metro’s efforts to build out a regional network of bikeways soon.

Next up, I’ll take a look at how Metro allocated their pot of federal stimulus funds.

— For more on Metro’s record-setting allocation of flexible funds, read this post over on the BTA Blog.

whatever happened with filling the springwater “gap” in sellwood?

Yay for the Twenties!!! That’s been a long needed one and always seems to get discussed at bike open houses/workshops. I am glad to see NE 28th as part of that! I am curious what will be done there, particularly the stretch between NE Sandy to SE Belmont.

Wow, that’s a lot of stuff! And that’s all approved — no more signoffs or anything?

Yeah, how’s that stretch on 28th from Broadway to Stark going to work? That’s a pretty high-traffic street.

That’s exciting to see them upping funding for bike/ped projects. Keep up the good work!

The 20’s connection between SE and NE seems like a particularly well-needed project that I think will be helpful to a lot of people.

$10 million? That doesn’t jive with the other info. What am I missing?

Kind of off-topic, but where was that photo of the bike left turn lane taken?

Where is that turn median pictured above located? I’ve never seen it and so want to go use it!

the photo in this story is on SE Ladd Ave., just south of SE Hawthorne. the view is looking north. The left turn would take you west on SE Clay Ave. here’s a streetview on Google maps

I think this is entirely appropriate considering that the region is spending well over $100 million in stimulus funds directly on road projects, primarily for autos..

My bike map shows a bikeway from Dekum to Bybee already exists, using various stretches of 26th, 27th, 28th, 29th and 30th. Am I missing something?

You guys are SOOOOOOO lucky to live in a state that is so forward thinking. Here in Washington, all of the transportation funds are going for rural highway and freeway expansion. It’s realy sad. Count your blessings and we to the north wish you congratulations.

I recently purchased directional turn signals for my bike and the 1st day I used them they saved my life at an intersection where a truck was making a right turn.
It’s a no brainer. I purchased mine at http://www.safetybikesignals.com.
For $40 bucks you get a lightweight simple device that might surely save yuour life.

I too am really curious about the NE/SE

I’m curious about the NE/SE Twenties Bikeway, especially after you get over I-84 traveling south. It’s pretty congested at least between there and Burnside. I wonder how they’re going to improve it without removing parking.

Yes! As someone who is moving to PDX in about 3 weeks, this makes me very excited. Especially the NE/SE Twenties project, as that will run a block or so east of my future residence. Way to go Metro! Meanwhile here in Nebraska I’m lucky to find a half-mile bike lane. I just can’t get to Portland soon enough.

“Varoom! Metro moved at NASCAR speed” was how the Portland Tribune described action March 5th on federal stimulus funds. Not a common description for government, I must admit.

The Metro region received a total of $102 million for transportation projects to get people back to work. Congress passed the bill on February 17th, approved the money on March 2nd and Metro acted on March 5th. A wide variety of projects will be built starting this spring, including repaving rutted roads, building sidewalks and trails, linking traffic signals to smooth traffic flows, upgrading buses and even protecting switches on Max that froze up this past winter. Here is a news release and link to more info on the actual projects funded by the stimulus funding.
http://www.oregonmetro.gov/index.cfm/go/by.web/id=29755

Contrary to comment #10, $59 Million of the $102M in stimulus funds we received is for transit, and 30% of the remainder benefits alternate modes in some fashion (sidewalks, boulevards, trails, etc).

As Chair of JPACT, I’m very proud and grateful to the people who work at Metro as well as those in local government transportation departments who worked so hard and so well together to make sure these desperately needed projects get built—and people back to work—as quickly as possible.

We are still working with the Oregon Department of Transportation to ensure that they will select a more equitable and more balanced set of projects with the funds they received—over $220Million. So far, the Oregon Transportation Commission’s list only spends 15% of these funds in the Portland metropolitan area, despite the fact that 45% of Oregon’s population lives here. I traveled twice to Salem to ask that they change their list. I was joined by representatives from Washington County, Oregon City and a few state legislators at the OTC meeting. Representatives Chip Shields and Tina Kotek, along with Senator Margaret Carter also weighed in.

I would also like to point out that all of the “planning” that Metro does regarding transportation means that our region is sitting in a better position to make good use of stimulus dollars.

Because of Metro’s regular work in transportation, we have our “ducks in a row” and lots of good projects lined up – that are only in need of funds.

Other areas of the country are not near as prepared or organized, and while they will of course find ways to spend the money – the difference is in the quality of the projects. Our preparedness allows Metro to put more stimulus money into better projects.

Everyone should contact their representatives in state government and ask them to put pressure on ODOT to do better with their chunk of the stimulus dollars. Just because we need it quick doesn’t mean we should abandon our principles. People can be put to work building good projects just as easy as they can making poor projects. Lets have good ones!

Then they might stick their necks out for bikes again the next time they get the chance.

+1 on the French Prairie Bridge!