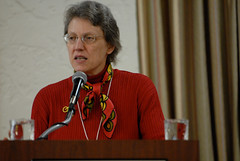 Chair of the Oregon Transportation
Commission, Gail Achterman, is in
the driver’s seat on how our state
spends its federal stimulus money.
(Photos © J. Maus)

The Oregon Transportation Commission (OTC) is meeting this morning in Salem to discuss which infrastructure projects will get built with money from America’s recently passed economic stimulus plan.

The OTC is a five member panel that is housed within the Oregon Department of Transportation (ODOT) and appointed by the Governor. They meet once a month and their job is to establish statewide transportation policies and manage the transportation network.

As the OTC solidifies their final, $350 million project list, some agencies are encouraging them to take a deep breath and re-think their priorities.

“…the approach the state is taking in developing a stimulus project list has focused primarily on getting projects completed quickly, rather than on making the best investments possible…”
Rex Burkholder, Metro councilor and chair of JPACT

Yesterday, Metro councilor and chair of the Portland metro region’s Joint Policy Advisory Committee on Transportation (JPACT), Rex Burkholder, sent a letter (download it below) to the OTC chair Gail Achterman. In that letter, Burkholder expressed concerns that the OTC and ODOT are headed down the wrong path.

“Our region is concerned that the approach the state is taking in developing a stimulus project list has focused primarily on getting projects completed quickly, rather than on making the best investments possible and ensuring an equitable distribution of funds.”

Also in the letter, Burkholder wrote that the list ODOT has developed “appears to be unnecessarily focused on delivering projects within the shortest timeframes.” That’s problematic, he explains, because only half of the federal stimulus funds for transportation must go to these “shovel ready” projects.

I reached Burkholder by phone about the letter yesterday. He said Metro is asking the OTC to “reconsider their own list”. Burkholder said ODOT developed their list when they thought they would have only 75 days to spend the money. But now, according to Burkholder, those restrictions have changed and he hopes ODOT will follow suit.

“We’re saying to them, don’t rush it…here are some other criteria to think about and here’s how to leverage other actions and some money coming along down the road.”

Burkholder says he is afraid ODOT will cave to pressure from groups like the Association of General Contractors (“because they’re broke” he said) to “put the money on the street tomorrow”.

To get more bang out of the state’s buck, Burkholder outlines several things he wants ODOT to do with their project funding plan:

1. Coordinate with local governments to maximize the impact of state and local funds.
2. Be flexible in developing and adopting the state’s project list given possibility of longer
obligation timeframes.
3. Consider focusing investments in metropolitan areas where the economic impacts will
be greatest.
4. Ensure that investments the state makes with stimulus funds have significant short and
long term economic impacts.
5. Maximize the use of stimulus funds to leverage other federal, state, and local funding.

Burkholder said OTC chair Achterman is likely to be receptive to his ideas. 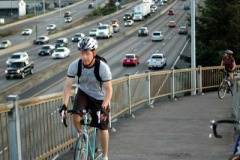 A man ascends from the Esplanade
near the I-5 freeway in Portland.

Burkholder isn’t the only one who hopes ODOT will listen and act on their recommendations for how to spend stimulus cash. A group calling themselves Transportation for Oregon’s Future also wants to influence the project list.

That group — which is headed by Bob Stacey of the 1000 Friends of Oregon and lists the Coalition for a Livable Future and the Bicycle Transportation Alliance among its members — penned a letter to Governor Kulongoski earlier this week (download it below). In that letter, Stacey wrote:

We urge you to direct your Department of Transportation to allocate the maximum possible amount of this federal funding to the long list of cost-effective, job creating, and community serving bike, walking, and transit capital projects that are eligible for this money.

Both Burkholder and Stacey are in Salem for the meeting today. Stay tuned for an update and more coverage on this story.

As an engineer I am glad that all the transportation money is not going to “shovel ready projects”. Shovel ready means that the engineering already done, or you are just filling potholes.

Unfortunately, the governor is taken by the delusion of electric cars saving the ‘burbs and by extension the American Dream. Come on Tedski, get on your bike and ride.

Or better yet buy another train for Amtrak, fix the rails and buy enough right-of-way to eliminate siding delays between Eugene and Portland and have a great two-way travel schedule.

What? There is a train that runs between Portland and Eugene? The last time I bought a train ticket from Eugene to Portland, they put me on a bus!

Coyote — “Or better yet buy another train for Amtrak, fix the rails and buy enough right-of-way to eliminate siding delays”

actually, i think i recall seeing that there’s $8 billion in the Stimulus for high speed rail – & presumably the Eugene-Portland-Seattle-Vancouver corridor is in the running for a slice.

I’m with you — speeding it up & increasing the number of runs would be a huge plus.

Pablo, that’s the good ol’ AMTRAK bait and switch. yes, there are a few train runs, supplemented by bus runs.

Unfortunately the “Amatrak bait and switch” is actually Oregon’s fault. We failed to go halvsies with Washington on buying the second south going train. So the second Cascades train stops in Portland instead of continuing south.

Leaving Portland in the morning and going south and returning the same day is a mess. I would think a train leaving Union Station early and arriving in Salem by 8:00 am and Eugene by 9:00 would be a real hit, especially if there was a way to get home that evening. Especially with all the traffic to the capital, the train station in Salem is walking distance to the capital.

It all doable with available technology and right-of-ways, we don’t need to invent the perfect battery, establish a hydrogen economy, or spend big bucks on HSR. All that is needed is a little money and leadership. Ted are you listening?

Salem has way underinvested in regional rail. Without Olympia’s help we would be back to riding the ‘Coast Star Late’ or waiting for a bus.

Remember that Salem almost cut service back to 1 trip a day during the ‘last crisis’ 3 years ago.

In Oregon it would be more productive for the cities and regional MPOs (Metro etc) to step it up for better valley service to the core of Cascadia.

Any effort to steer money away from projects that require people to buy cars in order to benefit from them is a good start.

I’ve ridden the Amtrak Cascades to Eugene and back, and must say – its a damn fine train.

They need a couple more, and to improve some of the track from Salem to Eugene, but otherwise I loved it. Much better than driving even.