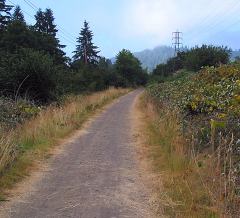 Pavement in limbo due to
funding uncertainty.
(Photo: Aaron Tarfman)

Supporters of a project that would pave the Springwater Trail from SE Rugg Road to Dee Street in Boring are celebrating this morning after news that the Oregon Department of Transportation has put the project on its recommended funding list.

The $1.2 million Springwater Trail project — which was applied for by the Clackamas County Parks department and received an outpouring of community support — is one of 13 on the final recommended list (out of an initial 91). According to Clackamas County Parks planner Katie Dunham, the total project cost is $1.8 million and it won’t happen with the TE money.

“We don’t want to give final approval to projects until we have a better idea of how much money we can award.”
— ODOT’s Patricia Fisher

ODOT plans to award $13 million in TE funding this go-round (FYI: TE funding is set aside for projects that “strengthen the cultural, aesthetic, or environmental value of our transportation system”.)

This step in the process would typically lead to approval of the list by the Oregon Transportation Commission this month and then eventual funding. However, you might want to hold onto those champagne bottles.

ODOT’s TE Program Manager Patricia Fisher told BikePortland this morning that due to “this time of uncertainty about budgets and funding” the TE program is essentially on hold until as late June 2009.

“All the projects will remain on the recommend list until next spring,” says Fisher, “when we have more information from state legislators and form the federal level about transportation funding and any economic stimulus.”

Fisher says they’re putting things on hold because if there’s less funding than normal, they “don’t want to get people’s hopes up.” “We don’t want to give final approval to projects until we have a better idea of how much money we can award.”

— More about TE Funding program at Oregon.gov. Read about the Springwater Project at BoringStation.com.

I actually enjoyed this section of the Springwater Corridor un-paved. It was another mountain biking opportunity.

If/when it is paved, I hope they don’t use the same crappy bone-rattling chipseal that is on the Portland portions of the trail. It is always such a relief to cross over onto the smooth pavement in Gresham (and that’s probably the nicest thing I can say for Gresham).

The feds may call back TE money to pay for the economic bailout. Brilliant.

How much does the following cost…”development of a conceptual site plan for the Boring Station Trailhead.

I’m all for the 2.2 miles of trail improvement, but what’s this conceptual site?

To the MT bikers, no worries, there’s suppose to be a “soft shoulder”.

This is great to hear.

I must add that it is very interesting that everyone is willing to spend just short of 2 million on 2.2 miles of paving, but needed bridges, which serve many, many more users, are poo pooed.

Another trails project is also inching ahead. There will be a public meeting about the Trolley Trail in Milwaukie tomorrow night at 7pm in Rose Villa on River road. Sorry I don’t have much more on this (I’m at work).

I’m not sure why we should pave additional trail when they don’t maintain the sections that are already paved.

I like riding the dirt section. I doubt there are people who are impeded by it. I’d rather see money spent on extending it or improving crossing treatments. For those riding 23c racing road bikes, the road that parallels the dirt part has very little traffic. That said, I have no problem riding my road bike on the dirt. But then again …I’m a bit crazy though.

“…needed bridges, which produce many, many more tons of GHG’s…”

first and only time i rode this trail it was a huge let down to find gravel after so many miles and being confused then just turning around back in to portland.
i’d really like to see this finished, it’d also be nice to have bike signals at some of the weird crossings.

Perhaps you could benefit from some medication…

I know your comments could…

I don’t know about that. If being anti-CRC is a sign of illness, then I guess a lot of people got the fever.

I agree, Chris. There’s nothing like riding 20 miles to a finish line of anti-road bike gravel. I’ve actually walked this section just to have completed the trail… not as fun.