Last night in North Portland the community got an update on npGreenway’s vision for a new riverfront trail that will someday link the St. John’s Bridge to the Eastbank Esplanade.

A group of of about 25 citizens, trail advocates, and neighborhood leaders came together to offer feedback, find out how to get involved with the effort, and get the latest scoop.

npGreenway recently completed their “vision” map with a grant from the North Portland Trust Fund, and they have been active in workshops and planning with the City’s River Plan project.

Metro trail planner Mel Huie showed up to explain how their recently passed, $227 million natural areas bond measure could play a part in making this trail a reality. Along with that, he offered this dose of humor and reality:

“I’m glad to see so many young faces in the crowd…because this is going to be a long term project.” 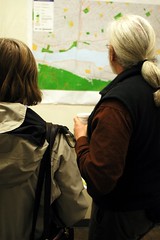 [Citizens were encouraged
to offer feedback.]

He added that over the next five months, Metro will conduct “stakeholder interviews” with three experts on the NoPo Greenway Trail, and with help from Metro real estate planners, these interviews will determine which land purchases around the trail would make the most sense.

Also on hand to offer encouragement with a dose of reality was Lenny Anderson. Anderson is a veteran trail advocate who’s worked on transportation issues on Swan Island for nearly 20 years. He knows the challenges this trail faces, but he also knows it can happen with hard work and persistence:

“In order for this trail to happen, the people in this room must get it on the agenda, make it a point on the map, in the minds of the managers of the bureaucracy. Once that happens, they’ll start finding ways to fund it.”

At a recent ribbon-cutting for a new trail on Swan Island, City Commissioner Sam Adams pledged his support for the trail. Now Anderson says, we need to follow-up and continue to make the project a priority for Adams and other elected officials. 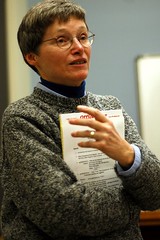 Also at the meeting was npGreenway Core Member Pam Arden. Pam is a member of the 40-Mile Loop Trust and has worked on Portland trails for over 20 years. She was instrumental in creating the Peninsula Crossing Trail, which was funded by the last Metro natural areas bond measure back in 1995.

Besides funding, one of the major barriers for this trail is that much of the proposed alignment crosses active industrial sites. At the end of the meeting a discussion session revolved around the need and opportunity for the new trail to co-exist, and perhaps even enhance this existing industrial activity.

npGreenway also hopes to work with the Rails-to-Trails Conservancy, which just so happens to be having it’s annual conference here in Portland this August.

For more information or to get involved with this excited effort, check out the npGreenway website and blog.

THANKS for the summary Jonathan. You’re right. We are excited and there is a lot of opportunities for people to get involved! Stay tuned to our website, blog and google calender to hear the latest. Thanks to everyone who showed up last night. It was a great meeting and we look forward to seeing more people at our next community meeting this summer.
Scott Mizée

Scott (and others) good luck with the trail.

How goes week 2 with the bakfiets?

Very, very well, but I think that is a post for a different topic….. Maybe I can write a “guest post” about living with a wife, four kids and a Bakfiets…. and the greenway trail… phew… now I’m back on topic.. 🙂

I hauled all of my gear to the meeting last night in the Bakfiets. …including a roll of 36″ wide maps, a messenger bag, a box of 11″x17″ maps, a laptop bag, and the kitchen sink.

One. It was great to see the good turnout at the meeting last nite. And the one message I took away was that to make this vision a reality will take a long haul view and that not only the obvious folks.. mayor/council/Metro council,etc need to be constantly reminded,but also planners,parks folks,neighborhood assoc, etc.

Two. Scott.. is that Bakfeits the ideal ride to take down the unofficial unpaved and very rustic Waud Bluff trail?

Three. Hey, all you folks on the list.. if you haven’t, check out npgreenway.org and see what the vision is. get on the email list( promise you won’t get bombarded with email) and join in making this a reality. Regardless of what part of where you live, adding off road trails like this to an urban area improves transportation possibilities,expotentially

four. Thank you Jonathan.. for being there and contributing to the dialog here in our community!