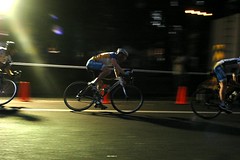 [The action heated up as the sun
went down.]

Thousands of spectators jammed the sidewalks around the South Park Blocks to gawk at the high-speed action. It was hard not to feel the adrenaline as the racers swooshed by just inches away. 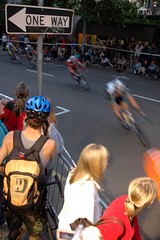 This year’s fifth annual event was definitely the biggest and best yet and the organizers really pulled out all the stops to make this Portland’s marquee racing event.

Porter Childs—head honcho at Good Sport Promotion—smiled as he told me about the aerial advertising banner he hired to promote the event. He said it was the first aerial ad banner Portland has seen in a decade.

Also new this year was a VIP area, complete with a classy buffet and a prime viewing location. 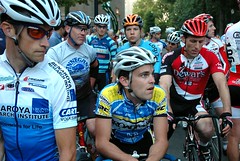 For many, it was their first exposure to the fast and furious nature of professional criterium racing, and I’m sure they won’t soon forget it.

There where thrills and spills, and athletes reveling in the thrill of victory and the agony of defeat. 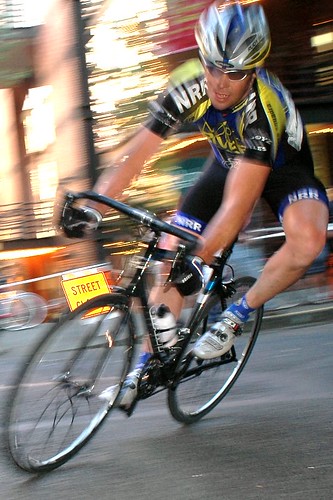 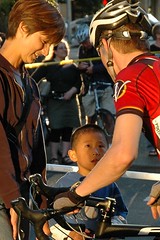 The race was also a family affair for some racers. This might be the fastest father I’ve ever seen. And check out this beautiful scene of a boy looking up to his dad like he’s a superhero.

Team Health Net dominated the results, but some local riders raced strong on a very tough course against some of the fastest riders in the region. There was Bike Gallery’s Shannon Skerritt (sporting the new Bike Gallery team duds and his signature wristbands), and of course Molly Cameron, who’s always glutton for punishment. 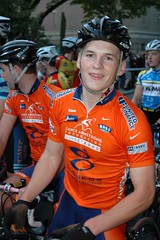 I also finally met Steven Beardsley, a super nice kid (check out his website) who has quickly become a racer to watch, especially on the velodrome.

My hat goes off to the organizers and to the racers for a thrilling night. I’m already looking forward to next year.

Check out the rest of my photos in the Twilight Criterium gallery.

I rarely come to this site and am still learning about it. I did take the opportunity to read about the HealthNet Crit this past weekend. I was looking to find information about Mikkel Bossen. A local boy doing good and a rider who finished 7th! Not bad for one of two, I believe, non-Pro’s in the race. One article talked about a rider from Colorado well how about we support our own local riders? When a rider gets support from his local town I am sure he or she gets even more enthused to ride harder and win races. Perhaps Mikkel will be in Le Tour some time in the near future and will mention Portland, Oregon as his home. As Chris Horner names Bend, Oregon as his home and Bob Roll even pointed that out in a tour broadcast when talking about Chris!
Jim Stone