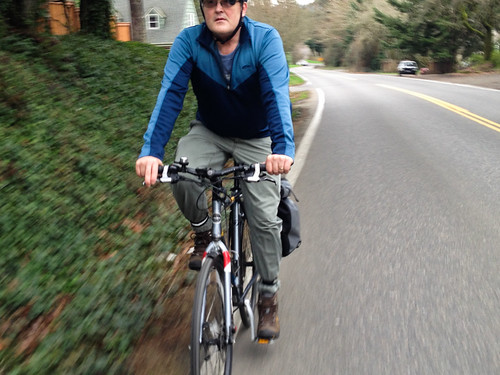 With 36-feet of unused right-of-way, advocates like Roger Averbeck say this portion of SW Capitol Hwy should have a dedicated bikeway.
(Photo J. Maus/BikePortland)

This post is part of our Southwest Portland Week.

For a quarter-century now, neighborhood activists have been pushing to make SW Capitol Highway a nicer place to live, walk, and bike. Yesterday I joined up with local resident and Southwest Neighborhoods Inc Transportation Committee Chair Roger Averbeck for a closer look. 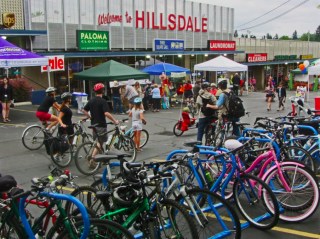 A ‘Marketplace’ set up at the Hillsdale shopping
center was a big hit.
(Photos: Roger Averbeck)

PBOT’s Sunday Parkways event ventured into southwest Portland for the first time this past weekend. According to Roger Averbeck, an active bicycle advocate in the area, about 10,800 people showed up and the event was a big success — although it did highlight the barriers that still exist to riders in the area.

PBOT hasn’t held the event in the southwestern part of town since Sunday Parkways started in 2008. That’s likely because the area lacks the connectivity, bike usage rates, and flat topography of other parts of the city. SW Portland is also criss-crossed by major arterial streets, which makes preventing cars from using all the lanes and allowing people to walk and bike on them a more difficult task.

Spurred on by a “Bicycle Facilities Strategy” planning document crafted by citizen activists four years ago, PBOT has been working to improve riding conditions in the area by building out a network of bike-friendly neighborhood streets and installing bikeways along with road projects.