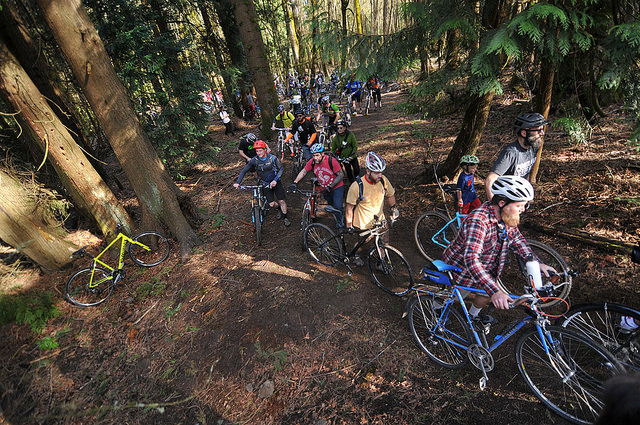 Portland’s Off-road Cycling Master Plan got a shot in the arm today from an influential city advisory committee.

The Portland Parks Board expressed strong support for the plan in a letter to Bureau of Planning and Sustainability Project Manager Tom Armstrong. The letter clears the way for Portland City Council to approve the plan — and to push back against those who are using false narratives to oppose it. The Parks Board has dismissed two of the main talking points of people trying to stop the plan: That that off-road cycling is incompatible with nature and that it can’t be done safely in an urban environment.

The letter (PDF), dated April 11th, comes after the Board received hundreds of public comments and hosted a special meeting on the plan earlier this month.

Signed by Parks Board Chair Patricia Frobes, the letter outlined a few relatively minor concerns and said the Board is “generally supportive” of the plan because it is, “a good conceptual road map for a city-wide system of off-road cycling.” And that system, Frobes wrote, should include even more places to ride. “Although the ORCMP proposes a good locational mix of bicycle parks,” she wrote, “it proposes no new urban off-road cycling trails on the west side. Further, the ORCMP does not adequately identify opportunities to connect parks to parks, parks to schools and parks to trails.” 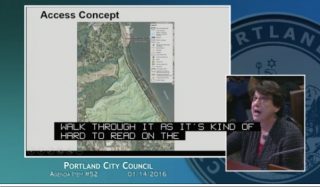 In the past decade there have been a handful of key moments on Portland’s mountain biking timeline.

Yesterday’s city council meeting was one of the biggest.

The River View Natural Area Management Plan passed 4-0 (Commissioner Dan Saltzman was absent) with an amendment that keeps open the possibility of bicycle access in the future. On paper, that’s far from what many off-road cycling advocates wanted. In repeated testimony at the hearing, they urged council to delay the plan’s passage until after the city completes its Off-road Cycling Master Plan.

Their concerns were that if it the plan gets adopted it would set in stone barriers to bike access: a limiting trail alignment and an “interim prohibited” status for cycling. 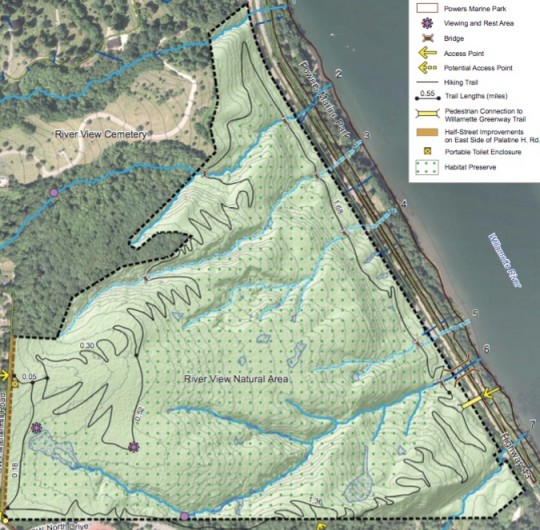 Map of the trail alignment in the River View Management Plan. Cycling advocates say if this trail alignment is adopted by City Council tomorrow the chances for bicycle access in the future are doomed.
(Map: City of Portland Parks & Recreation)

The Northwest Trail Alliance, a non-profit devoted to improving off-road cycling access in the Portland region, is urging its members to attend this Thursday’s City Council meeting. The group is concerned that if the Portland Parks & Recreation Bureau passes the River View Natural Area Management Plan in its current form, there will be no future for bicycle access in the 146-acre parcel. 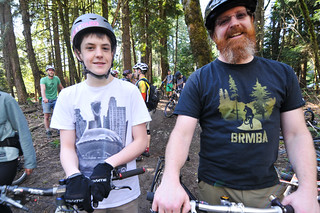 That’s no father and son on a bike ride. They’re
part of a vast “MTB industrial complex” that’s
merely a front for “their powerful corporate sponsors.”
(Photo © J. Maus/BikePortland)

You can tell when we’re on the cusp of possible progress for off-road cycling in Portland because the misinformation campaign by someone dedicated to stopping it has begun. Hopefully, our policymakers and elected leaders won’t listen this time.

With a city council meeting this Thursday to adopt management plan for the River View Natural Area, a guest opinion article published by The Oregonian is full of scare tactics and farcical conspiracy theories.

The essay was written by John Miller, a man who lives near River View, and it follows a long and sad line of similar attempts from activists and sympathetic media in the past. The headline, “Don’t let mountain bikers overwhelm natural areas,” sounds like it could be the start of an important discussion about the need to balance trail use with conservation goals. Unfortunately, Miller is more interested in hurting that discussion than moving it forward. 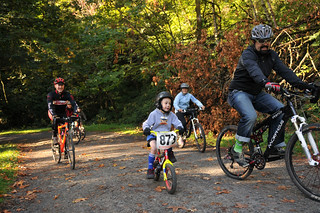 2016 is starting off with a bang for off-road trail riding in Portland. Two major plans — one that could bring bike access to the River View Natural Area and the other that develop a blueprint for off-road bike access in parks and other spaces throughout the city — are both moving forward in significant ways.

Back in November we shared some of the uncertainty that looms over a management plan for the Portland Parks Bureau’s River View Natural Area. That plan was controversial and spurred a legal action by off-road cycling advocacy group Northwest Trail Alliance.

The River View plan was set for City Council adoption last month, but the hearing was rescheduled. Now it’s set for next Thursday January 14th at 2:00 pm. 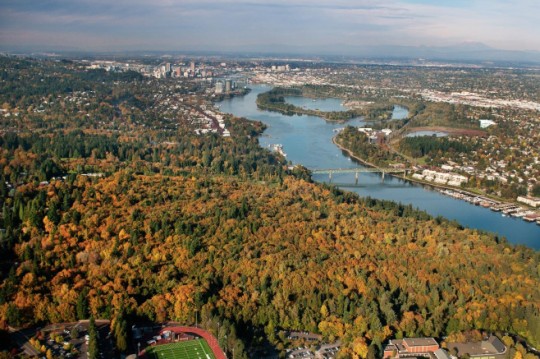 The River View parcel (foreground) is very close to downtown Portland and its trails are in demand.
(Photo from River View Natural Area Management Plan)

The Portland parks bureau has released its final management plan for the River View Natural Area and they’ve left the door cracked open — ever so slightly — for the possibility of off-road cycling access in the future. However, because the city’s process prevented a robust discussion of all potential trail uses, the plan is full of uncertainty. If it’s adopted by City Council as scheduled in mid-December it could have the unintended consequence of making it harder to allow cycling even if the city’s own planning process deems it appropriate at a later date. 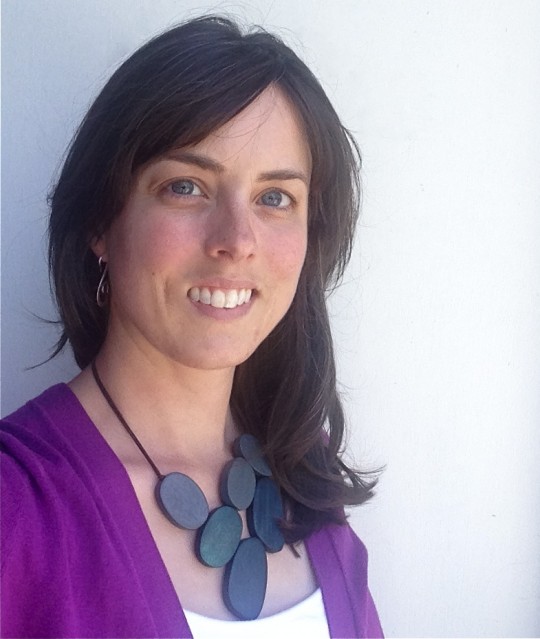 Michelle Kunec-North is managing
the process for the city.
(Photo courtesy Kunec-North)

A year after hundreds of people attended a rally in support of in-town mountain biking trails, the City of Portland is starting its project to decide where such trails should go.

“It’s a way for people to get outside, to get in nature, to be active, to spend time with their families,” said Michelle Kunec-North, the city planning bureau staffer (and longtime recreational mountain biker) managing the process. “It’s the city’s goal to have active transportation, and it’s kind of an entry point, for kids in particular but for adults in some cases, to learning how to ride a bike.”

In an interview last week, Kunec-North added that off-road cycling options in Portland would also help build a generation of stewards of the city’s natural areas and boost the local tourism and bike economies. 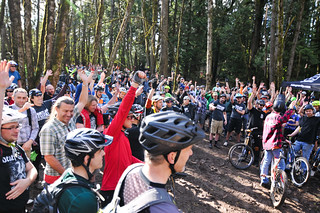 The Oregon Land Use Board of Appeals has dismissed a case that sought to reverse a decision to prohibit bicycling at River View Natural Area.

The case was filed back in March by the Portland-based non-profit Northwest Trail Alliance.

In their 12-page decision published on June 3rd (PDF here, scroll down for embed) LUBA explains that the case does not fit within the bounds of their jurisdiction because the City of Portland’s actions did not constitute a land use decision. LUBA said that local governments, acting in their capacity as “custodian and manager of public lands,” are withing their legal right to make decisions that restrict public access. 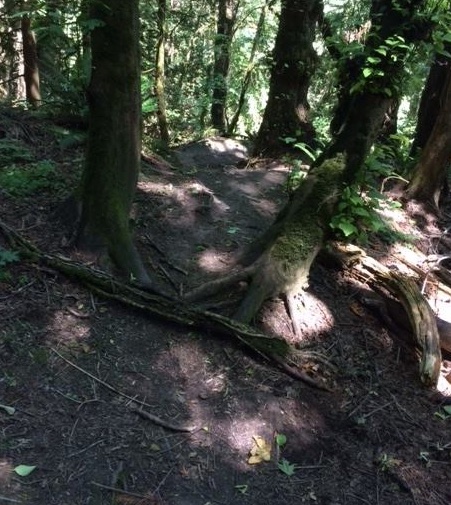 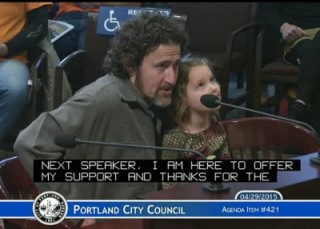 Daniel Greenstadt and his daughter Gigi
testified in support of the plan at
City Hall this morning.

A few minutes ago at their weekly meeting, Portland City Council voted in favor of a motion to fund the Off-Road Cycling Master Plan. During a discussion of an agenda item about the City’s Spring Budget Monitoring Process — known as the “spring bump”, Mayor Charlie Hales put forth a motion to split the plan’s $350,000 price tag between the Portland Parks & Recreation Bureau and the Bureau of Planning & Sustainability.

The mayor’s proposal uses $50,000 from Parks’ budget and $300,000 from BPS. The motion was passed with Commissioners Saltzman and Amanda Fritz both voting in support (Commissioners Nick Fish and Steve Novick are out of town and were not present). With Fritz on board, all five commissioners are in support of the plan is it’s ultimate passage is all but assured when Council votes on the budget adjustments sometime in the next few weeks.

Looks like Mayor Hales is willing to put money where his mouth is when it comes to addressing Portland’s extreme lack of trail riding opportunities. 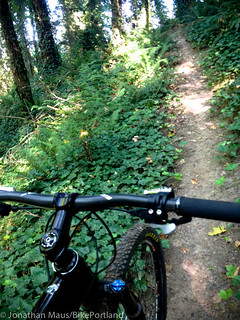 The City of Portland says the State Land Use Board of Appeals has no jurisdiction over its decision to prohibit bicycling on trails at River View Natural Area.

In a “motion to dismiss” filed on April 13th (which we obtained through a public records request, PDF here), Chief Deputy City Attorney Kathryn Beaumont argues that Commissioners Amanda Fritz and Nick Fish acted within their “managerial discretion” when they informed the community via a letter on March 2nd that bicycling would no longer be allowed on the 146 acre parcel.

The decision shocked riders and biking advocates. People have been riding the trails at River View for decades. And, following its purchase by the City of Portland in 2011, advocates were working in partnership with the Portland Parks & Recreation and Environmental Services bureaus on a management and trails plan under the assumption that bicycle trails would be allowed. The Northwest Trail Alliance, a Portland-based non-profit that builds, maintains and promotes off-road bike trails, responded by filing a Notice of Intent to Appeal with the State Land Use Board of Appeals on March 23rd.