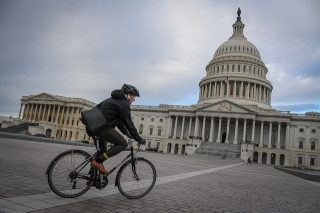 This National Bike Summit is the annual gathering of America’s cycling advocates. BikePortland has traveled to Washington D.C. to cover it nearly every year of our existence since 2006. Browse all our photos and stories below.

After joking that the photo was of him competing in a stage of the Tour de France, Foxx said: “The truth is, I’m a huge fan of biking and my family is as well.” END_OF_DOCUMENT_TOKEN_TO_BE_REPLACED

Amid the backdrop of renewed optimism that a new transportation bill is coming sooner than later, Congressman Earl Blumenauer headlined the opening plenary at the first full day of the National Bike Summit. Blumenauer used the occasion to urge the 700-plus advocates to help him push a gas tax increase as a way to steer the federal government away from the impending cliff transportation funding is heading off.

It’s the first time in 21 years, Blumenauer said, that he’s stumping around the country for a gas tax increase. Why? Because the doomsday scenario of the Highway Trust Fund drying up are becoming very real, very fast. END_OF_DOCUMENT_TOKEN_TO_BE_REPLACED

The stage has been set for Wednesday’s lobbying day on Capitol Hill. Each year on the second full day of the National Bike Summit, advocates from each state join together, march up to the Senate and House office buildings to talk bikes with their elected representatives. It’s the heart of the Summit and one of the most important things that happens here.

END_OF_DOCUMENT_TOKEN_TO_BE_REPLACED

Costumes not commutes, and other tips to cultivate the ‘all powerful bike lobby’

“You don’t create more riders with
suits and ties and spandex,” reads a slide
from Lily Karabaic’s presentation.
(Photos by J. Maus/BikePortland)

The National Women’s Cycling Forum is like a day-long master class in how to infect women and communities with the bicycling bug. For the hundreds of professional advocates and rising-star activists in attendance, there is a ton of great advice and inspiration being offered up. In one session this morning, Cultivating the All Powerful Bike Lobby, we were introduced to several women on the front lines of community-based bike advocacy.

The session was moderated by Leah Shahum, the 13 year veteran leader of the 12,000 member San Francisco Bicycle Coalition. She knows a lot about the bike lobby and the power that can come with putting it to use. Early in her career, Leah shared, she was “nervous” about the idea of power. It seemed like some sinister force and the idea of using it to her advantage was “difficult to grasp.” But years into her advocacy career, she’s figured it out. “I realized in the end that power is all about people… It’s about people’s stories and connecting people who make decisions with people in communities who have a different kind of power.”

But how can advocates for bicycling make that connection stronger? END_OF_DOCUMENT_TOKEN_TO_BE_REPLACED

END_OF_DOCUMENT_TOKEN_TO_BE_REPLACED

Before the opening plenary got started this morning, League of American Bicyclists President Andy Clarke said that their Women Bike program is “transforming the League and transforming our movement.” For the League, Women Bike has become a key pillar of their larger equity initiative which includes efforts to broaden the bicycling and advocacy tent to welcome women, communities of color, and kids.
END_OF_DOCUMENT_TOKEN_TO_BE_REPLACED

Thoughts turn to D.C. and the National Bike Summit

It’s that time of the year once again when hundreds of advocates, activists and bike lovers of all stripes converge on Washington D.C. for the League of American Bicyclists’ National Bike Summit. I’ll be attending again this year (my eighth time!), so stay tuned next week for various reports, musings, photos, and so on.
END_OF_DOCUMENT_TOKEN_TO_BE_REPLACED

Time to unite some spokes in D.C.

It’s that time of year when advocates from around the country make plans to attend the annual National Bike Summit, hosted by the League of American Bicyclists in Washington D.C.. And in a fortunate twist of timing, the same week the League released the agenda, I also read a big announcement from Capitol Hill: “Committee Hearing to Launch Surface Transportation Reauthorization Process.”