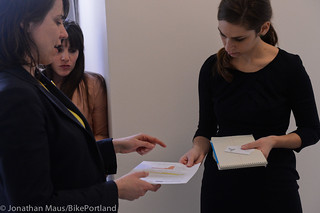 ‘Bikes mean business’ is the official theme of this year’s National Bike Summit; but that idea hardly needs any help in being put front and center. The economic impact of bicycling has become a mature topic that can now be backed up with statistics, studies, local success stories, and much more. For the Oregon advocacy team that made their way through the halls of Congress today to spread this message, bikes mean business was a natural and easy pitch to make.

At the first meeting of the day at Senator Ron Wyden’s office, Oregon bike advocates delivered the business message from several different angles. Wyden’s Legislative Assistant Alex Hackbarth (Wyden was unable to make the meeting and it’s common knowledge here on Capitol Hill that LA’s (as they’re known) are often more important to persuade than their bosses) set the tone for the meeting when she responded to the introduction of Rapha’s Chris Distefano by saying, “Oh yes, I’m intimately familiar with Rapha.”

“When it comes to creating jobs, we are right there at the forefront.”
— Diane Chalmers, VP of operations for Chris King Precision Components

Once the meeting got started, the VP of operations at Chris King Precision Components, Diane Chalmers, shared the story of her company’s success. “We had 40 employees when we moved to Portland eight years ago. Now we have over 100 and we’re currently looking to fill six more positions. When it comes to creating jobs, we are right there at the forefront.” Chalmers shared that Chris King’s mission now goes way beyond simply promoting bicycling from a recreational, sport, and transportation standpoint. “Now we’re looking at how to grow our economy.”

Washington County Commission Dick Schouten shared that his county’s visitor’s association has made bicycle tourism a key focus of marketing the region. Kristin Dahl with Travel Oregon shared data from a new report that shows the economic impact of bike travel in Oregon is $325 million per year (stay tuned for more in-depth report). Steve Schulz with Cycle Oregon said his ride pumps $5.5 million each year into the towns it passes through. Jeff Smith, an advocate with the Greater Oakridge Trail Stewards, said that mountain biking has “been a huge boost” the local economy. Susan Otcenas with Team Estrogen, an online retailer of bike apparel, said having good bike access on the roads around her company’s Hillsboro headquarters is “really critical for attracting talent.” 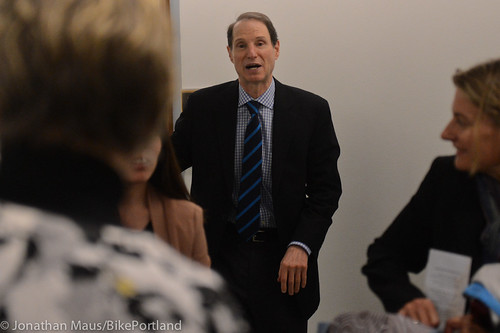 Senator Ron Wyden stopped briefly by our group on his way to a vote.

In all three meetings I attended today, the staffers and members of Congress perked up when we talked business.

“That type of information will be very helpful when we get started working on the new [transportation] bill,” said Hackbarth, Wyden’s Aide who specializes in transportation policy. “It’s not just about saving the environment any more… It goes way beyond that.”

Hackbarth added that due to the, “institutional resistance that opposes funding in bikes,” in Congress, stories of local economic impact will be crucial when conversations start up for the next transportation bill in fall of next year. 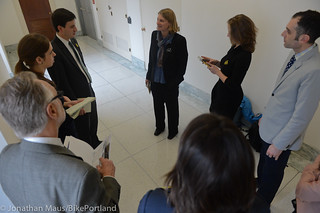 Things were busy and crowded so we met
Rep. Walden’s staff in the hallway.

Hackbarth is clearly a sympathetic ear when it comes to bicycling, which bodes well for maintaining Senator Wyden as a champion for our issues. But what about Representative Greg Walden, Oregon’s sole Republican member of Congress who isn’t known as a huge supporter of bicycling? Would the ‘bikes mean business’ pitch break through with his office?

The Oregon team met with Walden’s Legislative Assistant Caroline Robinson. She heard a focused message about bicycling’s economic impact from Jerry Norquist and Kristin Dahl. Rep. Walden lives in Hood River, a town that’s considered the gateway to a lot of great riding in the Columbia River Gorge. In addition to numbers from the new economic impact study, Dahl shared the story of a pheasant hunting ranch in the tiny town of Heppner, Oregon.

“The ranch’s owner, Phil Carlson, came to one of our tourism workshops without any idea about bicycles,” explained Dahl, “But he was so impressed by the bicycling numbers that he’s now planning to turn his ranch into an adventure cycling destination and riding area in the summers.”

To drive the message home, Norquist then stepped in and urged Robinson to ask Congressman Walden to keep those rural towns in mind the next time bicycle funding is on the chopping block. “As we move away from timber payments,” he said, “bicycling and bike events are a great way to make sure our forests continue to generate revenue.”

Robinson seemed engaged in the information and issues being presented. Toward the end of the meeting she said, “Those [economic] numbers are great because so many of those towns have high unemployment.”

That’s the type of connection everyone here on Capitol Hill is working on today.

Everyone back home should be proud of the Oregon advocacy team! They are doing you very proud… 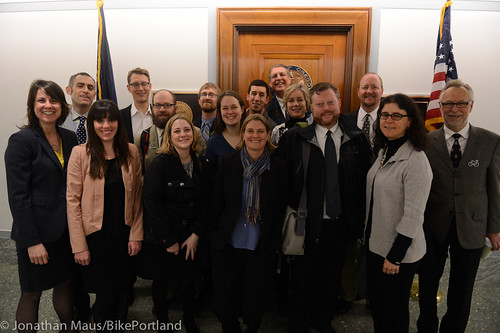 Jonathan, would you be willing to help with some identifiers in the photo captions?…

And being one of a very rare breed of Portlanders that loves bird hunting as much as bike commuting …. I may have to check out Heppner Oregon now!

Dang! Wish I was there! I’ll be going again next year- this year was tough with the newborn! Craig- K Dahl is on the left.

K-man – we wish you were with us! I have lots of great info to share from the bike travel study. We just received the data last week, so it will be a few weeks before we have the final report. Hopefully we’ll have it together for the Oregon Active Transportation Summit.

This is really encouraging! Hackbarth is absolutely right, bikes are way bigger than environmentalism.

For a long time now, I’ve tried to convince every bike rider I know to leave “the environment” off the list of reasons to ride when we talk to non-cyclists. The list is long enough without it. Cycling is:

At any rate, it’s great to see people’s brains finally switching on at the highest levels of government.

The more advocacy groups learn about marketing, the more effective they will be. Even ideas have to be properly branded to appeal to the customers you want to buy it. IMHO, a lack of marketing acumen is what holds back most advocacy movements.