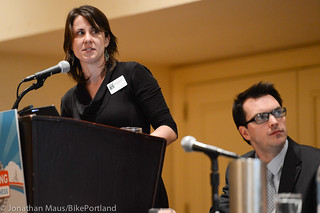 From a boom in bike manufacturing in Portland to increased economic vitality on streets with protected bike lanes in Manhattan, signs of how bicycling grows the bottom line are everywhere in America these days. On Tuesday during the National Bike Summit in Washington DC, a panel of experts addressed yet another component of this wave of good news: The major economic implications of bicycle tourism.

Kristin Dahl, Travel Oregon’s senior manager of destination development, spearheaded the bicycle tourism portion of the panel amid her advocacy peers from other states and Jerry Norquist of Cycle Oregon. Far from just a romantic endorsement of mountain biking or cycle touring, Dahl’s presentation focused on facts and data.

This study also found, among other things, that an overnight bike tourist had 19 times the economic impact of a day tourist (this should be a huge incentive for rural towns to make themselves bike-friendly); visitors biking in the Central Oregon and Columbia Gorge regions spend over 10% of the region’s tourism dollars; and 4.5 million people of Oregon’s 17.4 million annual tourists rode bikes while visiting (which should help strengthen the call for better bike trails and infrastructure). The study is based on an online survey that was filled out by over 5,000 people. It also broke down demographic, gender, income, and detailed data about the type of bike-related and spending activities people engaged in.

Below are a few slides from Dahl’s presentation: 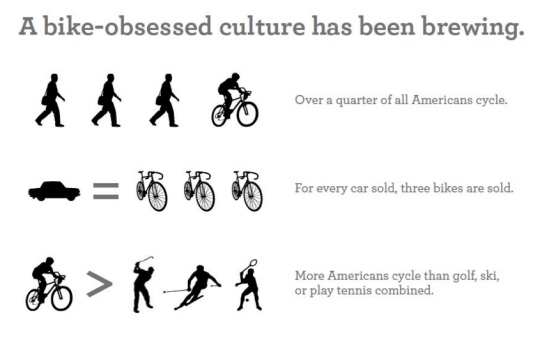 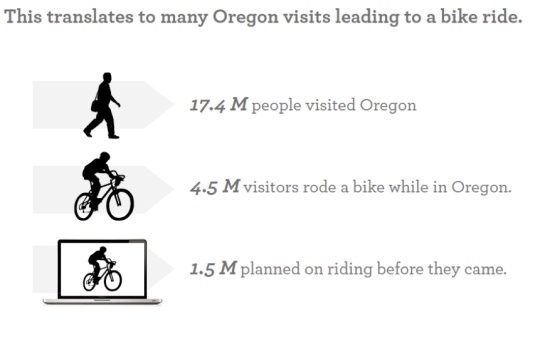 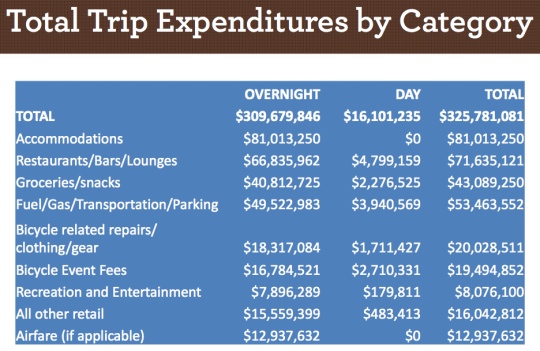 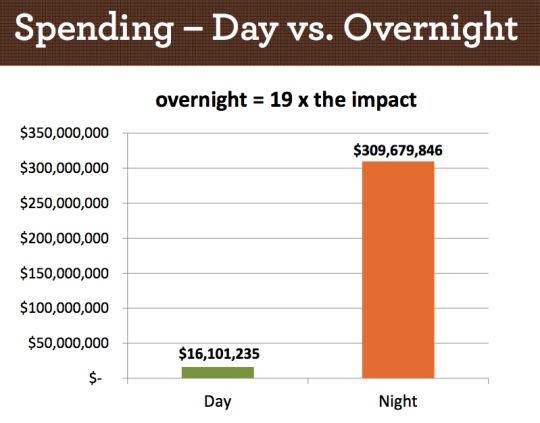 The invaluable data in this study substantiates a significant argument for bicycle tourism. Once the final numbers are in, it will be used by advocates and community leaders to leverage interest in bike-friendly initiatives from business leaders and policy makers alike.

“The study, the first ever done in Oregon, indicates the bicycle travel segment of our market is strong,” said Dahl to a packed room of advocates eager to add this ammunition to their arguments. “But the real value in a study like this lies in helping community leaders and business owners make sound judgments about investing. Data plays a critical role in informing a community’s economic vision for recreation and tourism.” 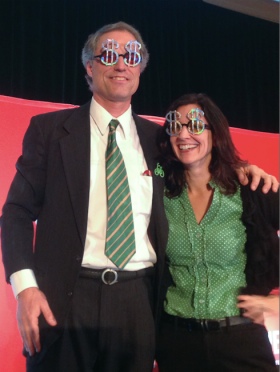 The Adventure Cycling Association has collected substantial numbers about the economic impact of bicycle tourism around the country. Wisconsin claims $924 million annually, Minnesota $261 million, Vermont $83 million, and Iowa is at one million dollars per day.

After a long day of digesting figures and stats, bike tourism advocates convened at a nearby bar to stimulate DC’s local beer economy for a collegial happy hour. People from Washington state, Oregon, DC, Arkansas, California, Montana, Pennsylvania and beyond rubbed elbows over loud music.

A crowded pub sometimes proves a superior environment for connecting, brainstorming, and percolating ideas at conferences like the National Bike Summit. However, next year at the Summit, I hope bike tourism is a bigger part of the conversation. It deserves to be (as much as I like swilling beer and scheming).

(*This study by Dean Runyan Associates of Portland includes only preliminary numbers and is subject to change. Final numbers will be available later this year from Travel Oregon.)

Ellee Thalheimer is author of Cycling Sojourner: A Guide to the Best Multi-day Rides in Oregon and co-author of Hop in the Saddle: A Guide to Portland’s Craft Beer Scene, by Bike

Thanks to Travel Oregon, Cycle Oregon and everyone else that was representing our state at the summit. The bike tourism economy provides real jobs in our communities and investing in it is a smart choice as more and more travelers are looking for healthy and environmentally responsible recreation activities. Go team!

A quibble: I believe that this data indicates that total spending by cycle tourists making overnight stays was 19x the amount spent by day trippers. From my reading of the chart, it does _not_ indicate that each individual overnighter spent 19x each day tripper: from this data, we could only say that if the number of overnighters was the same as the number of day trippers, and we don’t know that is true.

And if bike tourism is really bringing in that much revenue, it should be no problem getting some separated bike routes for marquee tours like the Oregon Coast, so we can see fewer cycle tourists run down, right? Will this be the year that Travel Oregon makes that a priority?

I agree with Dan. The numbers seem really squishy. People spend more when they stay overnight, bike or not. That said, I’m a Seattle resident who makes regular trips to Portland with my family to ride bikes. So, I’m a bicycle tourist who happlily pumps Seattle money into the Portland economy. Events like Sunday Parkways and infrastructure like the Springwater trail and those two Willamette bridges you are building are a big draw for out-of-towner cyclists like myself.

I wonder how much of that money come from being shaken down by the police in St.Helens…Oregon is beautiful with many nice people,of course.It also has some kind of awful backlash against cyclists.Portland is truly a bicycle city but outside of Portland the traffic is mean,nearly as bad as Western Australia and that is a bold statement,I’ll admit.After having hundreds of cars pass in a menacing manner(including mean eyes in the rearview) I was assaulted then arrested in St.Helens.A long story short,all the cops wanted to know was if I had cash so I could pay bail,then every one of them suggested I flee and never return to Oregon.It was sound advice,I’ll never return to your state…

Lewis, I’m so sorry to hear that. Not sure if you’re still willing to engage, but it might help future cycle tourists (locals and visitors) if you typed up your experience and submitted it to Travel Oregon.

To my mind, they’ve done a good job of marketing Oregon as a bicycle destination, but have really failed to step up and take responsibility to ensure that the infrastructure and education is there so that cyclists can have a safe and fun trip here. There have been a few deaths and serious injuries in the last year or two, and Travel Oregon has not been forthcoming on what they’re doing to improve the situation.

Just to be clear, Travel Oregon works in partnership with state and federal agencies that are responsible for bike infrastructure in Oregon. It is not within our realm to directly fund bike infrastructure improvements. By demonstrating the economic impact that all forms of cycling can have and by helping partners to develop programs like the Oregon Scenic Bikeways (a program managed by Oregon Parks and Recreation Department), we have a very strong case when working with our partners (like ODOT, OPRD, PDOT, USFS, BLM, ODF) responsible for improving bike infrastructure. I just want to be clear about our role in this so that you understand where to apply your energy/pressure/anger/frustrations.

I recommend reviewing our Industry website where you can learn all about our role in stimulating economic vitality in Oregon through tourism for a full picture of what we do: http://industry.traveloregon.com/

Dear Kristin, the upper graph looks a bit strange. With population of more than 300 million there should be about 75 million cyclist in the US. The number of cars sold in 2012 is about 14 million. 14 multiplied by 3 makes 42 million bikes. Does it means that the number of cyclists nearly doubled in just one year? Or alternatively every second cyclist bought a new bike?

Anastasia, that slide is a distillation of the Outdoor Industry Association’s Outdoor Recreation Participation Study from 2012. I would invite you to explore their numbers and methodology for further detail. (Just Google those words and it should come right up for you.) I believe that the statistic about 3 bikes for every car sold is just in relation to sales that occurred in 2011. The two stats (# of bikes sold and # of bikers) are two different statistics not necessarily interdependent.