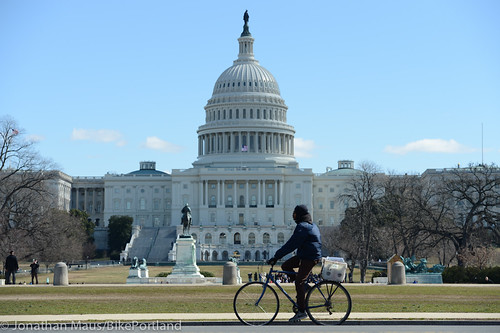 It’s that time of the year once again when hundreds of advocates, activists and bike lovers of all stripes converge on Washington D.C. for the League of American Bicyclists’ National Bike Summit. I’ll be attending again this year (my eighth time!), so stay tuned next week for various reports, musings, photos, and so on.

Once again, the agenda for the event is jam-packed. I’ll arrive on Sunday night (3/2) for some pre-Summit fun. Our friends at Streetsblog and Streetfilms (in tandem with the League) are hosting a “Media Training for Bicycle Advocates.” The event (details here) is aimed at making professional advocates better at PR and media relations and it’ll feature some super-smart folks from the news business and the advocacy-journalism sphere.

The next day (Monday) is the third annual National Women’s Bicycling Forum which will feature an impressive slate of breakout sessions and speeches from “female leaders from across the nation.” The Women’s Forum lasts all day and goes right up until the start of the Summit dinner and Opening Plenary on Monday evening. I was there for the first Women’s Forum and I’m curious to see how the movement has evolved.

Tuesday the Summit starts in earnest with a whopping 13 panels and sessions to choose from — and that’s before lunch! There are 21 breakout sessions in all and the topics include: Overcoming the Scofflaw Perception; Business People make the Best Messengers, Leveraging National Health Goals, The Role of Enforcement in a Vision Zero Strategy, Video Advocacy, Moving Beyond the Bikelash, and many more.

As always, mixed into the agenda are keynote speeches from a wide range of major leaders in the transportation world. This year I’m particularly interested to hear what new US Department of Transportation Secretary Anthony Foxx has to share with us.

Then on Wednesday we’ll head up to Capitol Hill where each state delegation will lobby their elected leaders at scheduled meetings with Senators and House Representatives. For many people, the Summit ends with a big party and reception on Capitol Hill Wednesday night; but there’s also a ride planned Thursday morning for those who want to keep the spirit going and maybe even share a few pedal strokes with their member of Congress.

Our 2014 National Bike Summit
coverage is sponsored by Planet Bike.

With President Obama floating a $302 billion transportation bill just this week and serious work underway to make sure bicycling plays a big role in it, the timing of the Summit is really good this year.

Please note that both Michael Andersen and I will be D.C. for the Summit (he’ll be there at the request of his other employer, People for Bikes). This means we might not be as responsive to local Portland news if/when it breaks. We’ll do our best to keep the local bike news flame burning, but both of us will be primarily focused on covering the Summit.

During my time in D.C. last year, I managed a bit of non-Summit reporting that included a “People on Bikes” photo essay, a trip to the USDOT headquarters, a look behind the scenes of Capital Bikeshare, and a day as a Capitol Hill photographer at the swearing-in of US Department of the Interior Secretary Sally Jewell. You can read those stories in our archives.

There’s one last, pre-Summit programming note I’d like share: As they have for several years now, our friends at Planet Bike have stepped up to sponsor our coverage. As you read the stories and photos next week, please keep that in mind and consider supporting them and letting them know how much you appreciate their sponsorship. I certainly do. This site wouldn’t exist without such dedicated advertising and sponsorship partners.

— Check out the full agenda of the 2014 National Bike Summit here.

Off topic, but something you should look into, for what the news means for Portland:

A plan to bring Capital Bikeshare to College Park is on hold as a result of the bankruptcy filing of a company that manufactures the bicycles for the operator of the program, a College Park official said.

Check out “the guards” restaurant for the best prime rib you ever had.