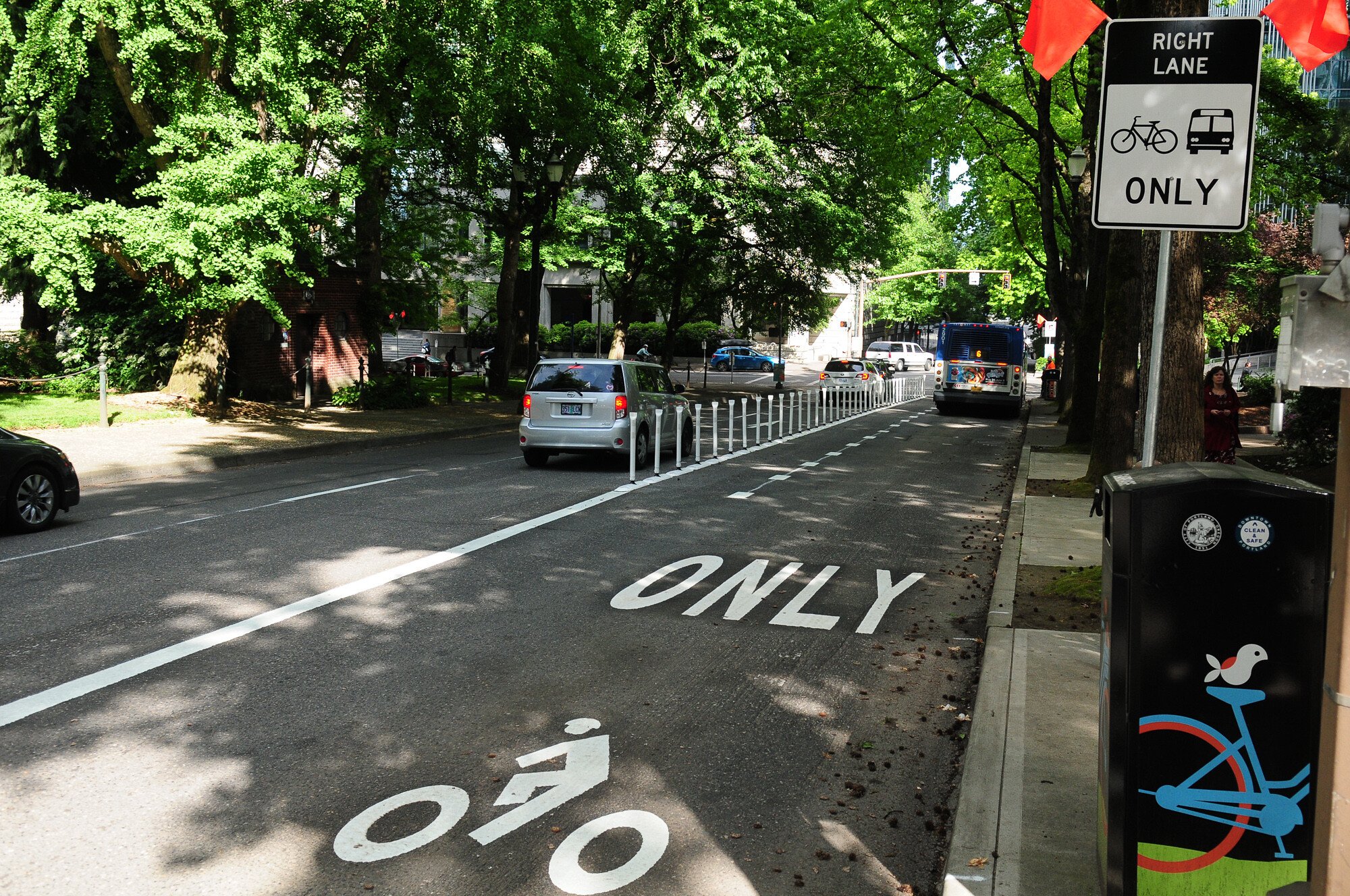 Amid all the talk about how to “fix congestion” there’s one cheap and relatively simple solution staring us in the face: dedicated lanes for efficient vehicles like bikes and buses. 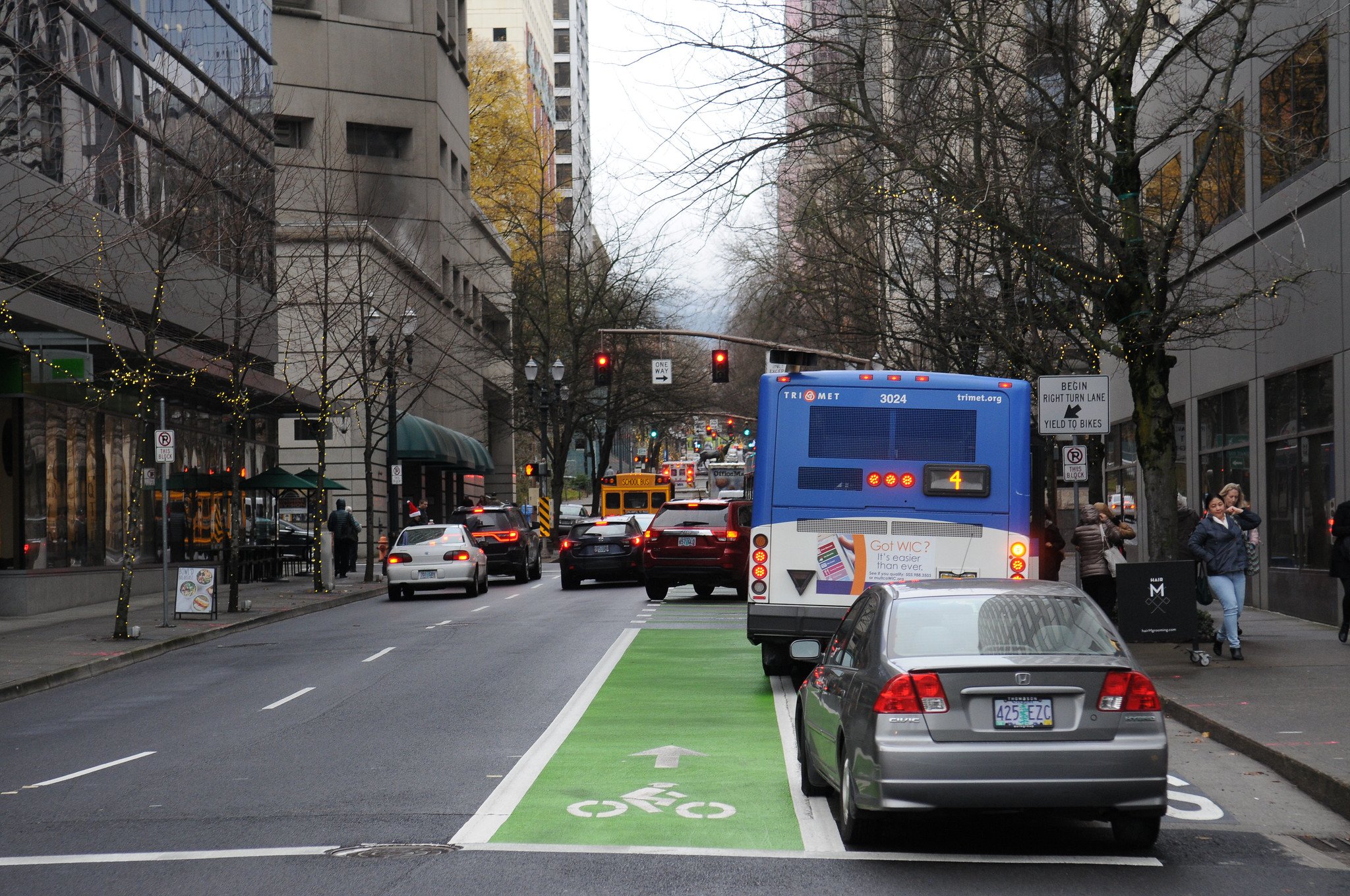 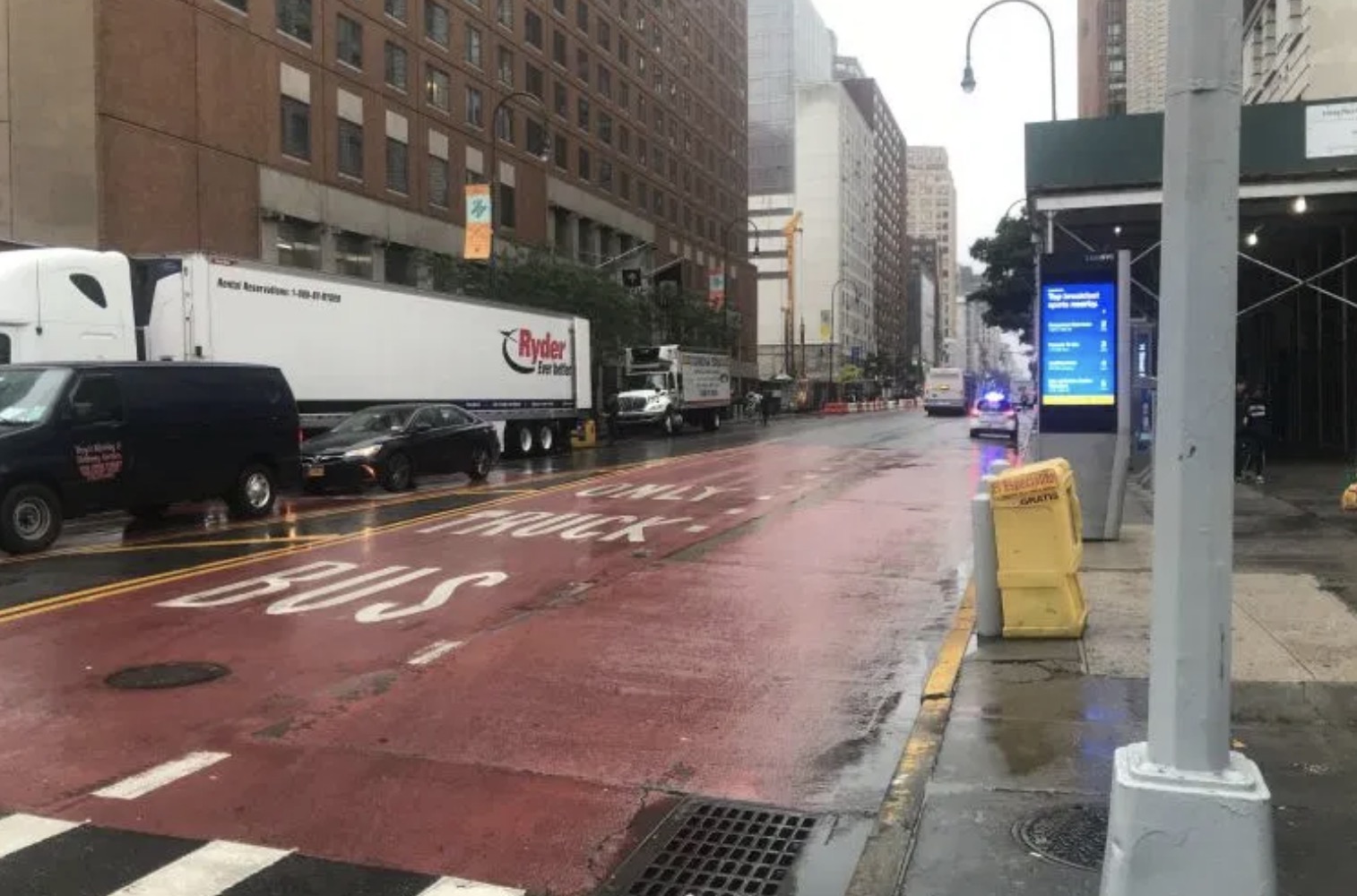 Like their bold reclamation of Broadway Boulevard and Times Square Plaza a decade ago, the New York City Department of Transportation has once again changed the game.

They’ve pushed through serious opposition to create bus-only lanes on one of the busiest streets in Manhattan. Neighborhood groups filed a lawsuit to stop the project, claiming spillover traffic would choke nearby streets and the lack of auto access would doom the neighborhood. A court overruled those claims and allowed the project to go forward. Over a day in, the opposition’s fears have not come to pass (big surprise). The new service has been so successful that the Wall Street Journal reported bus drivers had to slow down to keep their schedules. 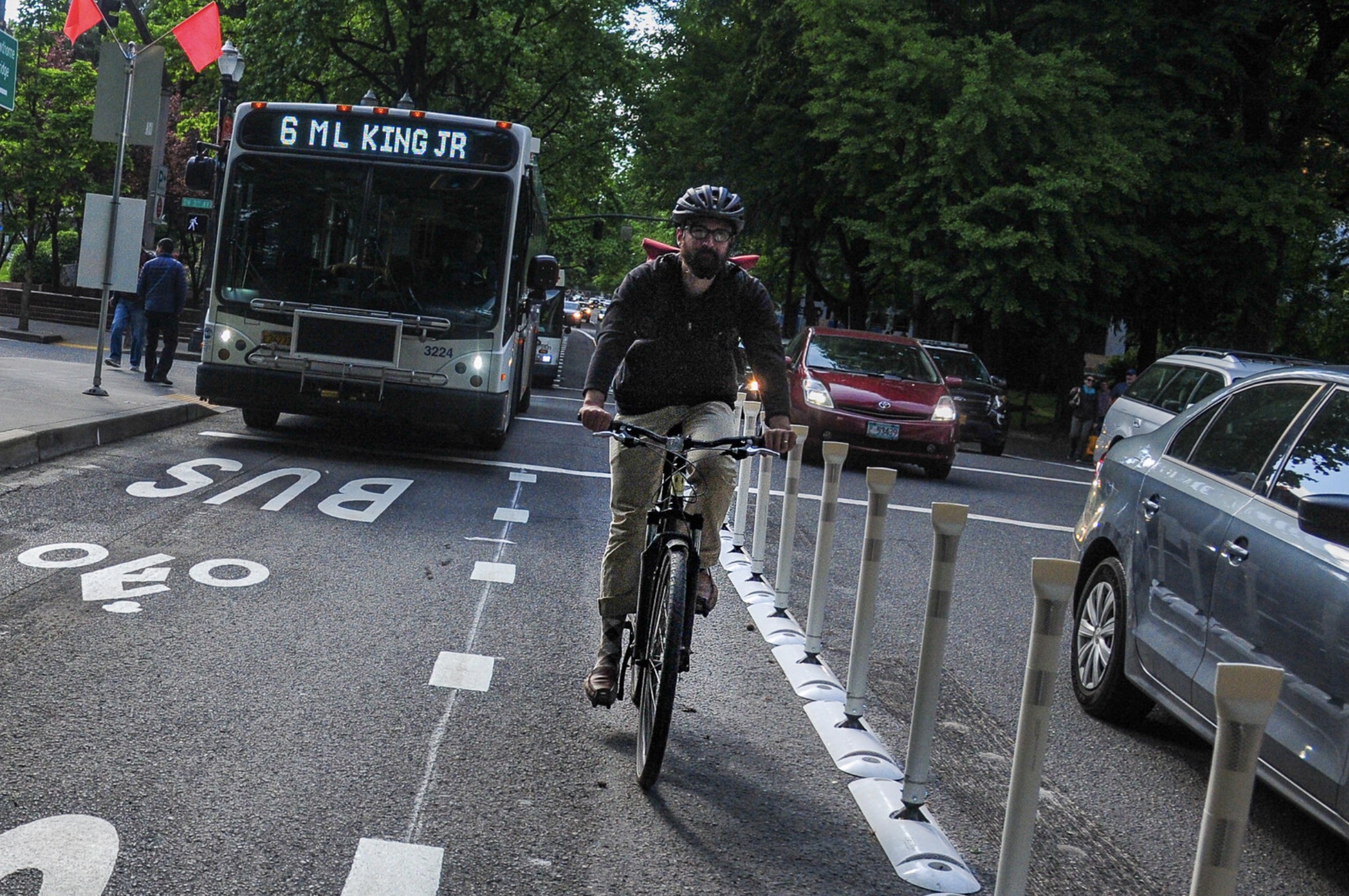 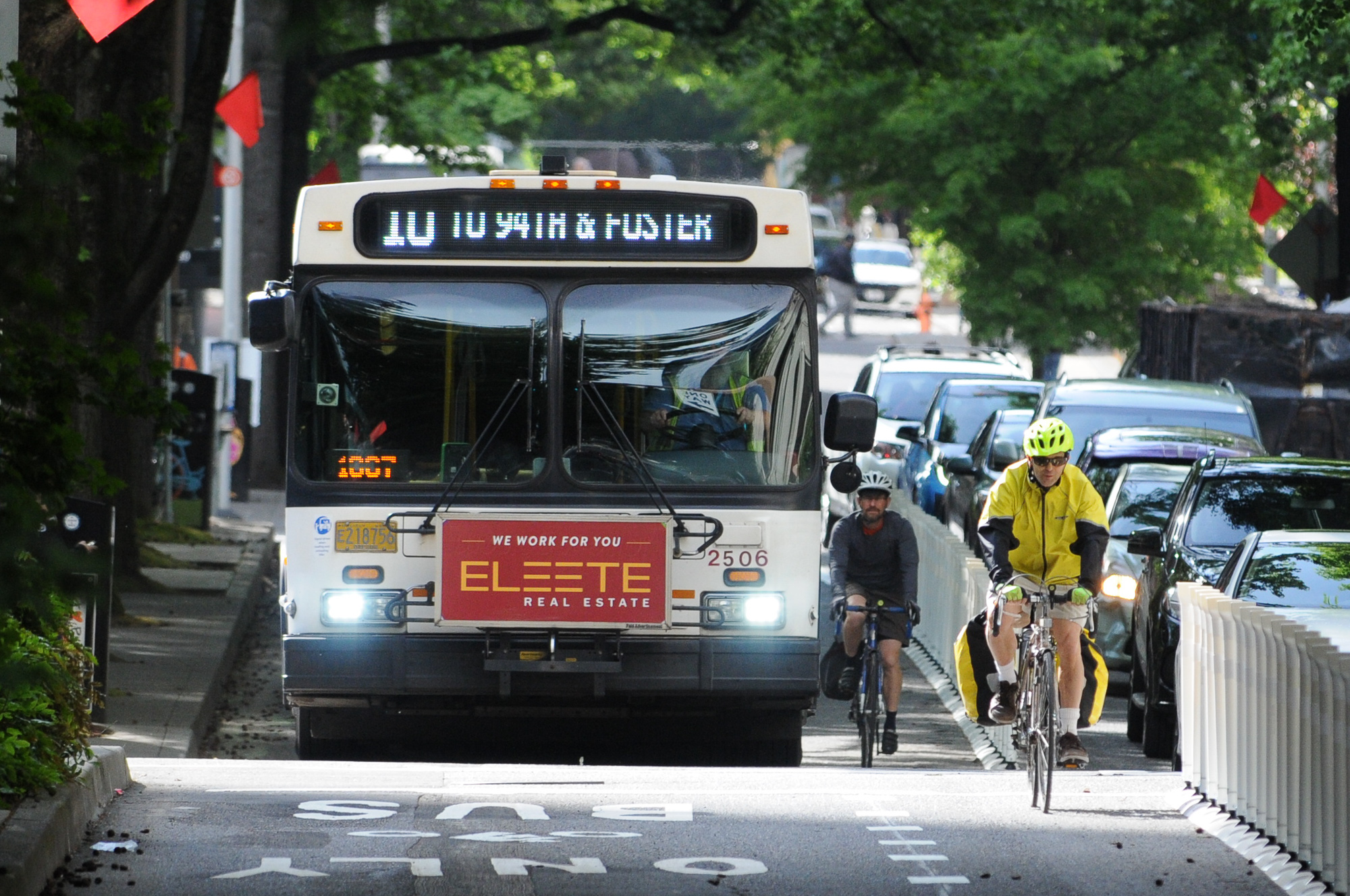 When the Portland Bureau of Transportation revealed their plans for SW Madison last week, there was at first rejoicing. Many of us are desperate for any change to our streets that makes bicycling and transit safer and more efficient. Dedicating a wide lane solely for transit and bike riders on a major downtown corridor is an exciting step in the right direction.

But almost as soon as we posted about the project, there were concerns about how this new lane would be shared by people operating such dramatically different vehicles. 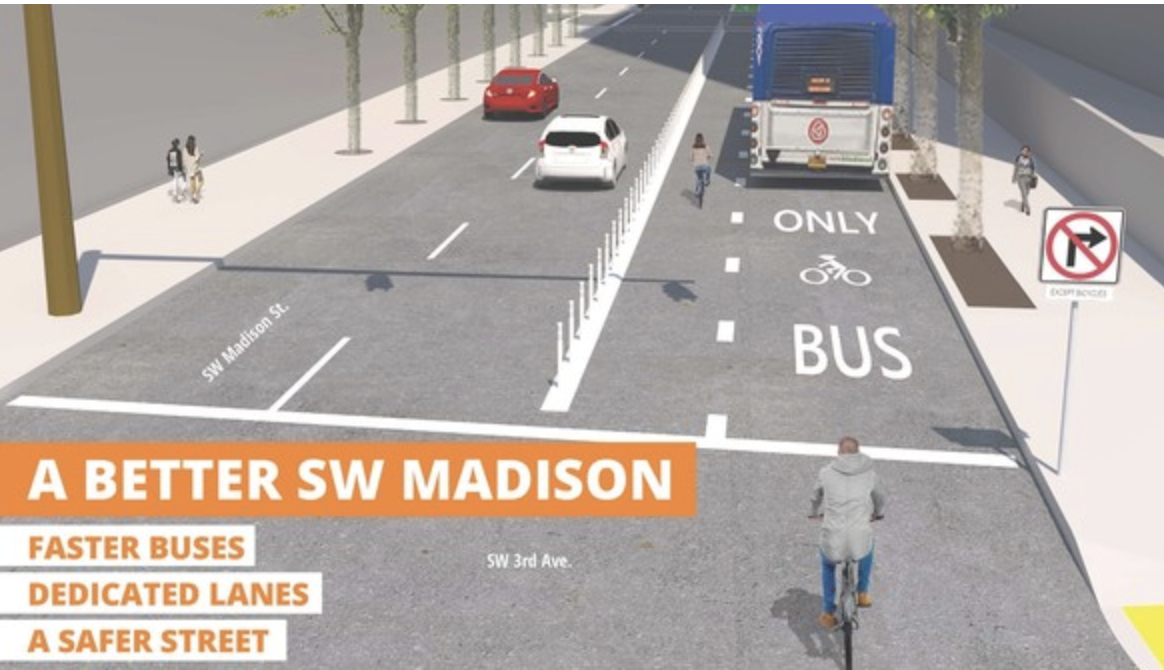 The Portland Bureau of Transportation announced the construction of its first Central City in Motion (CCIM) project today: SW Madison – one of the busiest bikeways in Portland — will get a dedicated bus operation and bicycling lane that will be separated from other traffic. The project aims to speed up bus trips, make it safer to ride a bike, and lower the the stress of drivers by giving them clear separation from other road users.

Portland is changing and so are our streets. Whether those changes help or harm our city is entirely up to us.

One of the biggest changes is an increase in the amount of people who drive. Congestion is everywhere and one of the victims are bus users. During peak hours especially, they get stopped behind single-occupancy vehicles. It’s maddening when public transit is delayed by such an inefficient and costly mode of transportation.

One way the Portland Bureau of Transportation has decided to deal with this problem is to focus on getting cars out of the way of buses. For the past year or so they’ve worked on the Enhanced Transit Corridors plan, which is now in draft form and open for public comment (until March 26th, sorry for late notice). The plan aims to institutionalize the concept of “enhanced transit” within the City of Portland, and to identify projects that will improve transit capacity, reliability and travel time. 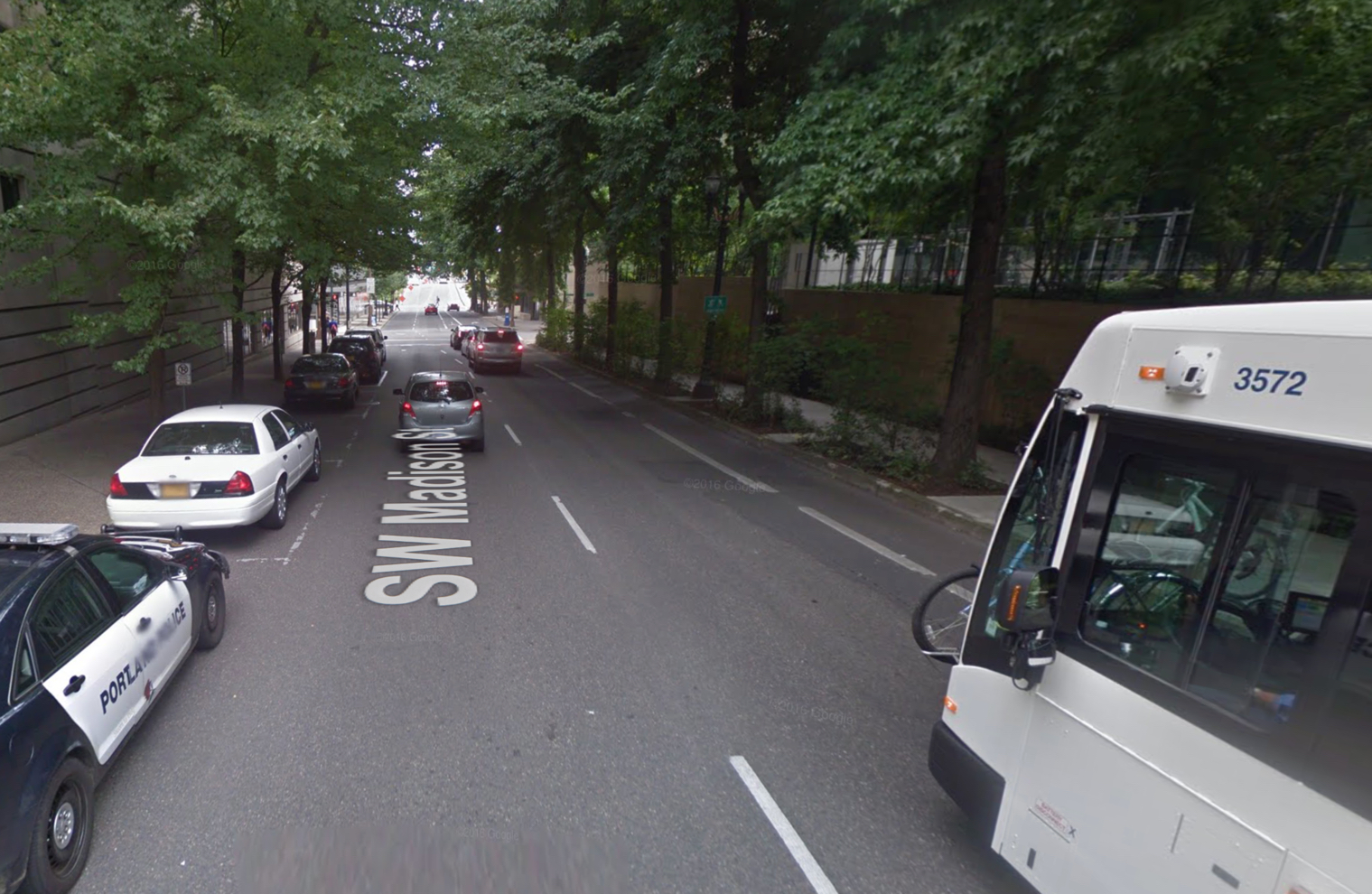 Physical separation is to bicycling what reliability is to transit. If we don’t have it, the masses will never switch from driving and our transportation system will never reach its potential.

That’s why an idea for a “pop-up” bus-only lane is worthy of your attention.

Our friends at the all-volunteer Portland Bus Lane Project have pitched an idea to Better Block PDX that would reconfigure SW Madison Street between 5th and the Hawthorne Bridge. Their idea comes in response a request for proposals that Better Block launched back in July.

PBLP was hatched in May by a group of transit advocates that are frustrated with how auto-congestion during peak hours is killing bus reliability. Their solution is to create dedicated bus-only lanes which they see as an inexpensive way to prioritize mass transit and improve bus reliability while getting more people to their destinations on time.

Their proposal is currently being vetted and considered by Better Block and they’ve given me permission to share it with you.

If we don’t want these additional buses stuck in the same traffic, we need to provide dedicated space on our streets for them.

This post was written by Luke Norman, a BP subscriber and volunteer with Portland Bus Lane Project.

The Portland Bureau of Transportation’s Growing Transit Communities Plan is slated for a hearing (and possible adoption) on September 6th. Now is the time to learn about it and consider sharing your feedback.

The plan is primarily focused on improving access to TriMet bus lines 20, 77, & 87, which include some great safety and connectivity projects for people walking and biking. However, hidden in the document are two corridor studies that have the potential to significantly increase transit connections for East Portland residents. 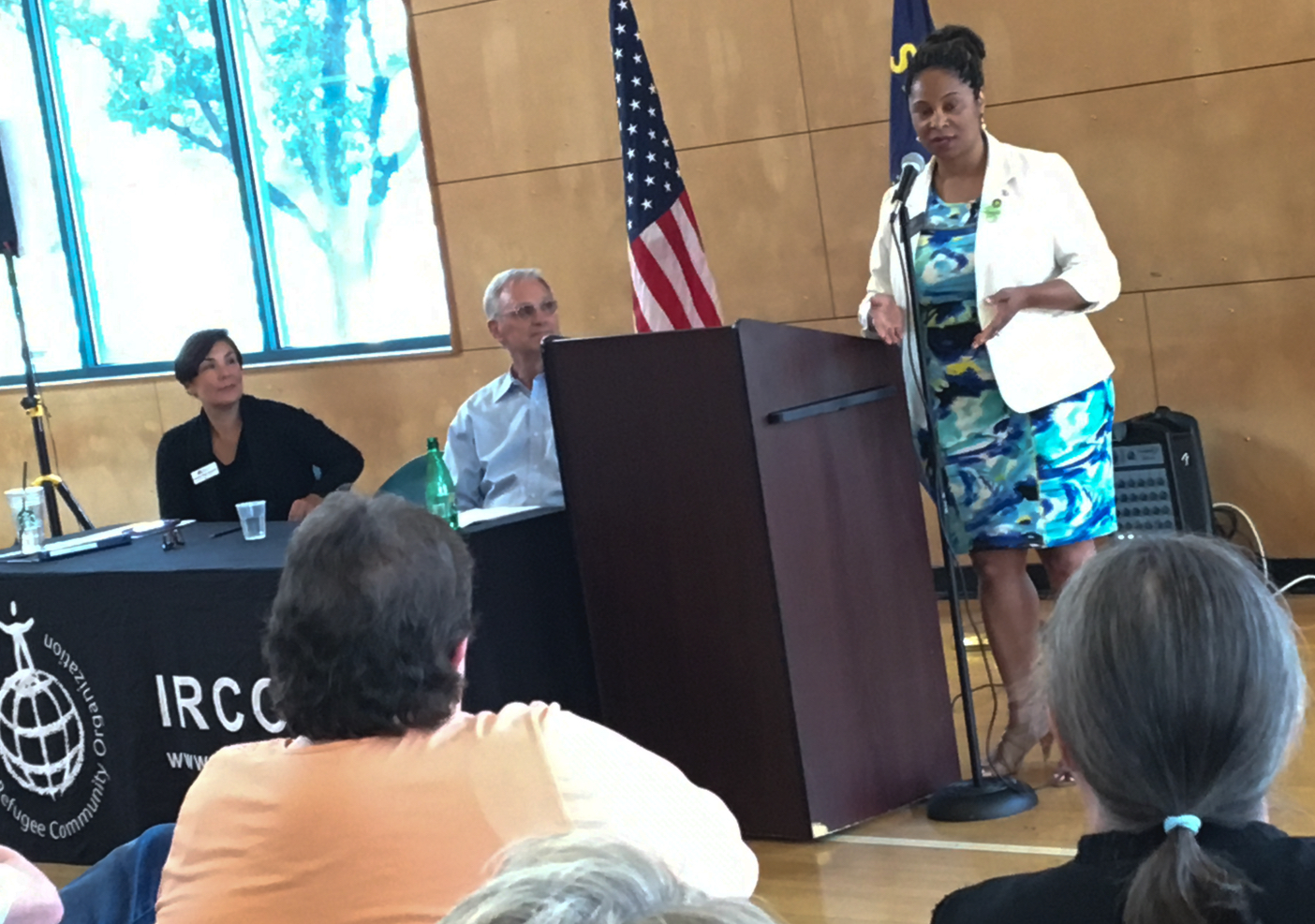 Transportation is such a hot topic in east Portland right now that, “We need to be inside with the air conditioning,” said Lee Cha last night in the gym of the Immigration & Refugee Community Organization, located near the intersection of 102nd and Glisan. Cha, IRCO’s executive director, welcomed a panel of three lawmakers to a public forum on the topic: County Commissioner Jessica Vega Pederson, Oregon State Representative Janelle Bynum and U.S. Congressman Earl Blumenauer.

The trio shared their perspectives on the issues and were asked questions by the audience.

Blumenauer played emcee and kicked things off. A veteran bike advocate and the face of cycling in Congress, Blumenauer knows the big picture here: He went to high school nearby and served as both a county and city commissioner before moving to D.C.

One-by-one he checked off some of the big problems. “Since the first light rail and a few freeway projects, there’s been very little federal investment east of 82nd,” he said. “And the 205 freeway was a mixed blessings in terms of what it did to the neighborhoods it was dropped into. It took a lot of time for the communities to recover… This area has been sort of a stepchild.”

Blumenauer added that “orphaned highways” like Powell and 82nd are “stuck in limbo” and “aren’t much different from when I went to high school out here and that was a long, long, long time ago.” 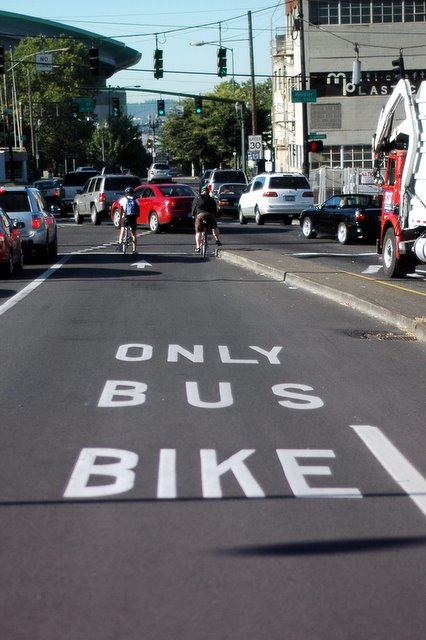 More dedicated lanes for buses might be an idea whose time has come in Portland. At least that’s how it appears given the support that the Portland Bus Lane Project has received after it launched just two weeks ago.

The effort is being spearheaded by lawyer and activist Alan Kessler. Kessler turned his passion for more reliable and efficient public transit into an organized effort after a May 4th tweet of gridlock on the Hawthorne Bridge gained attention.

Since then, Kessler has built a website and social media presence, garnered headlines, built up an email list (he has about 140 people signed up already), and even tabled at the recent Sunday Parkways event.

“The vast majority of comments we received [at Sunday Parkways] were supportive,” he shared with us yesterday. “We heard over and over from folks how well bus priority works in other cities they’d lived in and visited.”

Much to Kessler’s surprise, he said many people who stopped by his booth had already heard about his efforts. One of those people was Portland City Commissioner Nick Fish. “We were excited when he pulled up and grabbed a card.”