Columbus beats out Portland and others for federal Smart City Challenge

US DOT Secretary Anthony Foxx on the end of favoring cars 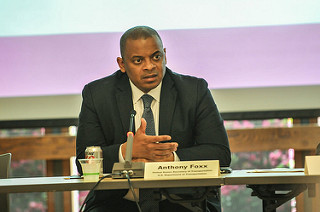 US DOT Secretary in Portland for ‘Smart City’ pitch, shares his views on transportation

Portland is pulling out all the stops to win this thing.

USDOT Sec. Anthony Foxx sent his transportation bill to Congress today, and he was in Indianapolis touting bikeways one day earlier.

The National Bike Summit gave us our first chance to hear directly from new US DOT Secretary Anthony Foxx.

Anthony Foxx could be our next DOT Secretary.(Photo: Anthony Foxx Facebook Page) News has broken this evening that President Obama will pick Charlotte Mayor Anthony Foxx as the next US Department of Transportation Secretary. Foxx, 41, would replace Ray LaHood, who Obama appointed in December 2008. Foxx has been mayor of Charlotte for almost four … Read more