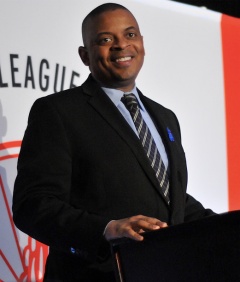 US Department of Transportation Secretary Anthony Foxx has sent his new transportation bill to Congress. The “Grow America Act” is the latest sign that Congress and the Obama Administration are getting serious about addressing our nation’s infrastructure problems as the Highway Trust Fund edges closer to bankruptcy this summer.

In a statement released today, Sec. Foxx said, “I visited eight states and 13 cities as part of my Invest in America, Commit to the Future bus tour this month and everywhere I went, I heard the same thing – people want more transportation options and better roads and bridges to get them where they need to go. Failing to act before the Highway Trust Fund runs out is unacceptable – and unaffordable.”

In today’s announcement, Sec. Foxx touches on all the standard transportation talking points like job growth, safety improvements, better freight networks, and so on. We scanned the announcement for any mention of bicycling. Unfortunately bicycling wasn’t focused on in any major bullet point. It was barely noted in one of the last paragraphs by the Acting Administrator of the National Highway Traffic Safety Adminstration David Friedman. He said, “Whether traveling by motor vehicle, walking or bicycling, we are committed to ensuring that Americans reach their destinations safely. Our approach will continue to support both safer behavior and safer vehicles to prevent deaths and injuries on our roadways.”

One element of the bill that’s good news for the Portland region is the priority on local decision-making. In other words, the bill would give power to groups like Metro to decide how to spend federal money. Progressive transportation advocates know that when given the opportunity, regional planning agencies tend to much more bike-friendly than the feds.

While today’s official announcement barely reference the importance of bicycling to America’s transportation future, Sec. Foxx struck a different chord while in Indianapolis yesterday for the launch of the next six “Green Lane Project” cities. As reported this morning, Foxx stumped for cycling in front of the pro-bike crowd:

“When you have a swelling population like the USA has and will have for the next 35 years, one of the most cost-effective ways to better fit that population is to better use the existing grid,” Foxx said.

Foxx made his comments to a gathering in Indianapolis of urban transportation experts from around the country, welcoming six new cities into the PeopleForBikes Green Lane Project, a two-year program kicking off Tuesday that will help the cities — Atlanta, Boston, Denver, Indianapolis, Pittsburgh and Seattle — add modern protected bike lanes to their streets.

“I know you are the vanguard in many ways of these issues, and we at U.S. DOT want to do everything we can to be supportive,” Foxx told the crowd.

Until we see the details of the bill, it’s hard to know exactly what “supportive” will mean. Hopefully we see programs in the bill dedicated toward building more bicycle-specific infrastructure like the Indianapolis Cultural Trail, which is one of the premier bikeways in the country.

All, the details of the bill–including the exact text and a sectional analysis–as well as 13 different facts sheets are available on the DOT website http://www.transportation.gov/grow-america