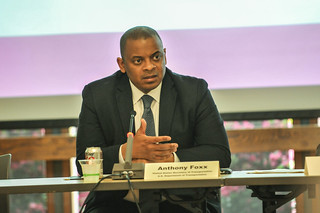 It’s a united front of support for a transportation project the likes of which we’ve never seen. And hopefully U.S. Department of Transportation Secretary Anthony Foxx was just as impressed as we were.

Yesterday the Portland Bureau of Transportation hosted over 50 notable leaders and elected officials from a variety of backgrounds to sit in on a roundtable with Foxx as part of their massive effort to win the $40 million “Smart City Challenge” prize. Portland is one of seven finalists for the grant award and Foxx is currently touring each city before making a final decision in June.

Portland’s vision is for “Ubiquitous Mobility” — an investment in intelligent transportation systems, apps, smart signals, connected vehicles, and so on — would marry data and travel habits to create a union of effciency, ease, and access that would benefit all Portlanders no matter how they get around.

To win we’ll have to beat out cities like Austin, Denver and San Francisco with the most compelling answer to the question posed by Secretary Foxx yesterday: “How do we harness the best technology to solve our mobility challenges as a country?”

Based on Foxx’s comments yesterday the winner would be wise to shake up the status quo and put equitable access to the technology front and center in their pitch.

There wasn’t enough time yesterday to get into the details of Portland’s vision. Rather, the event was an opportunity for each invited guest to tell Foxx that they support the city’s proposal and are ready to help carry it out. 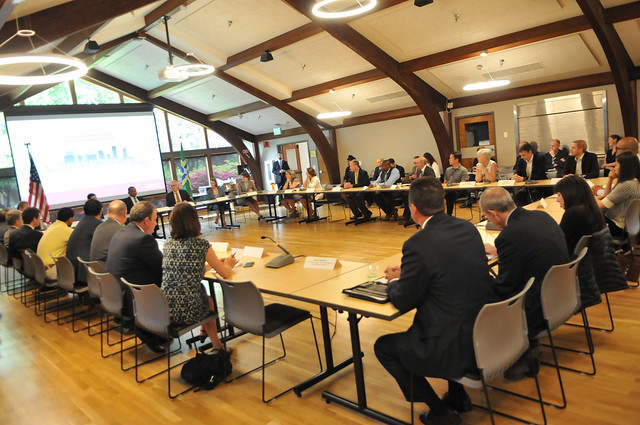 “It’s been an educational process for me to learn how this process could address real solutions for problems our community faces.”
— Duncan Hwang, Asian Pacific American Network of Oregon

Oregon Governor Kate Brown was on her way to the event (which was held on the Portland Community College southeast campus at SE 82nd and Division) but due to Secretary Foxx arriving late she had to cancel to attend a different event. And that’s too bad because Governor Brown — who just released her vision for transportation and has been busy prepping for a big infrastructure spending push in the 2017 legislative session — needed to hear the perspectives that were shared.

PBOT Director Leah Treat said using technology for better transportation outcomes is a key part of her Vision Zero efforts. “We have an epidemic of traffic violence that disproportionately impacts communities of color,” she told the Secretary. Making the system work better for all Portlanders — regardless of income or ethnicity — was a constant theme yesterday. Commissioner Novick said, “If we win the grant we will make sure it serves the entire city.”

Duncan Hwang with APANO, a nonprofit that empowers Asian-Pacific Americans and whose headquarters were across the street from yesterday’s event said he was initially skeptical about the Smart City project. “I thought it wouldn’t have anything for our community,” he explained to Secretary Foxx. “But It’s been an educational process for me to learn how this process could address real solutions for problems our community faces.”

After hearing from the assembled guests Foxx took a few questions (including one from me which I’ll share in a separate post). 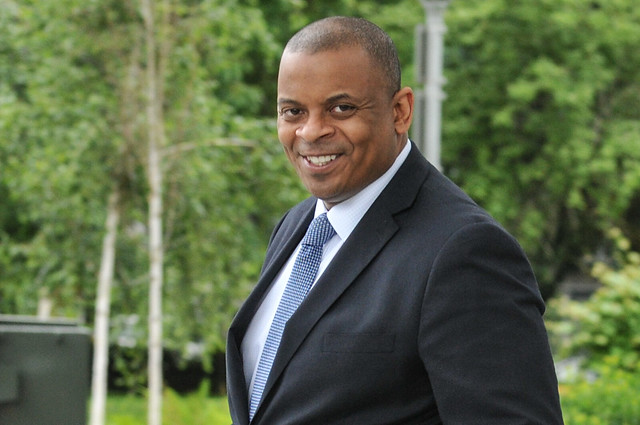 The first one was a doozy: Oregon Transportation Commission member Alando Simpson asked his for his personal definition of “equity.”

“We’re the most innovative country in the world and yet our ideas around transportation go back decades. We need to go forward decades… So I encourage you, go for the moonshot with your ideas, don’t be incremental.”

Secretary Foxx said in his travels around the world and the country he’s noticed a common thread. “Every civilization has had some variation of a group that’s in and a group that’s out,” he said. “And you can see who’s in and who’s out based on infrastructure.” While his point was that America isn’t alone in this struggle for equity, he said we have “intolerable widening of opportunity gaps in this country.” And many of those gaps begin with how we’ve approached transportation infrastructure. “We have to take seriously the responsibility that the concrete, asphalt and steel that are embedded in our country have — and continue to — play a role in exacerbating those gaps.” Transportation, Foxx said, isn’t just about getting people from one place to another. It’s about “Making places better.” And to do that, he added, we must address equity in a more serious way:

“I think the thing we struggle over as a country is, what is the inclusive idea? What is the fundamental thing we have missed in previous eras that we need to take account of now? And that’s one of the reasons why the Smart City Challenge is asking us to think about equity and inclusion on the front end. Not as an appendage to the cool technology, but how does the technology itself help transform things for people at the highest economic rung and people at the lowest economic rung.”

When asked what he’s learned from other countries when it comes to making cities smart, Foxx again spoke out against the dominance of auto-centric planning. “People from other countries can’t figure out why we’re so stuck on the automobile,” he said. “We’ve invested so much in the idea that this one thing is going to get us to nirvana — but we’re at a point that I can say with reasonable certainty that that’s not going to happen. Doesn’t mean that we don’t need cars. We do need cars. We do need trucks. But if that’s our mobility strategy our country is going to choke on traffic.”

And he went on. After saying “with all due respect” to his predecessors, he had some choice words for how we got into our current mess:

“We still have a pretty stovepiped way of thinking about transportation. Our Federal Highway Administration has great stats on highways, transit has great stats on transit, FRA has great stats on commuter rail systems. But when you ask how the overall system is performing and when you start thinking about how you would create more mobility… For instance if Portland doubled its population tomorrow, what systems would be most efficient, effective investments for mobility? That’s where we fall down.”

In his closing comments Foxx implored the leaders around the table to do things differently. To take risks. And to “solve this challenge” of making all the modes work together.

“We’re the most innovative country in the world and yet our ideas around transportation go back decades. We need to go forward decades… So I encourage you, go for the moonshot with your ideas, don’t be incremental.”

PBOT has five days to complete and submit their final application by May 24th. Stay tuned for a decision. And keep your fingers crossed.

Awesome! We need more leaders who says things like that!

Dan A
Reply to  kiel johnson

When we say it, it’s Common Sense. When a leader says it, it’s GENIUS. 🙂

I’m with ya! We can’t even get planners to move away from automobile Level-Of-Service (LOS)-based development even when their states say they are. Strategy and even policy are useless without planning, budget, execution, as well as measurement and corrective action. Technology is no panacea either, though I’m writing this from Chiba, Japan, where I’ve enjoyed watching several stackable parking garages in action.

Sounds like an informative event, though; looking forward to the next write-up.

Equity would be charging for a bus or Max ride by distance and not time, not sure how smart that ends up being though.

Pretty sure equity would be charging for transit by ability to pay.

So equivalent service offerings should vary based on certain characteristics of the individual receiving them?

You seem to be confusing equity with equality. Here is a helpful graphic.

Cute, but I was thinking more along the lines of not disincentivizing people with the financial means of choosing any transportation mode from using ones that may be less personally convenient but more publicly beneficial. Sure it ultimately comes down to subsidization of the private automobile, but it makes the most sense to me to make mass transit attractive to everyone, not just the ones economically forced to do so.

Plus, where do you draw the line? Attorneys General across the US have already stopped businesses like Amazon from charging more for the same goods in wealthier regions, why would publicly funded transit organizations then be allowed similar practices?

In practical terms, just implementing dynamic charging would cost more than it would recoup anyway.

Now, giving travel rebates to underprivileged travelers is another story…

his personal definition of “equity”: “Every civilization has had some variation of a group that’s in and a group that’s out,” he said. “And you can see who’s in and who’s out based on infrastructure.”

That’s a very, very good answer. I hope the leaders present heard it loud and clear.

His point – that each kind of transit should be part of a cohesive whole – makes sense. The Johnson Creek MAX station is a good example. You’ve got a park & ride lot there. Buses and MAX stop there. And there’s a direct connection to / from the Springwater Trail there. Holland does the same thing. Almost all of their national bike route system has paths connecting to train stations with car and bike parking just off the trail. Our transit network, local and national, needs to be set up that way. Encouraging train and bike travel, as well as waking, should take precedence over car traffic.

I freakin’ love this guy. Don’t know if he’s personally effective but his people have done a bunch of great stuff at USDOT and it sounds as if he totally gets it philosophically. Why doesn’t anybody ever talk about him for elected office?

Yeah, he definitely gets it. I really hope he finds a position to bring his influence to after Obama leaves office.

Smart streetlights and signal timing is definitely ON the list.
Ped/bike infrastructure is overall ahead of IT nonsense like the self-driving car. I’m embarrassed anyone could think empty taxis cruising makes sense. How about EVs in garages matched to PV arrays on roofs as backup power supply in emergency complementary to regional utility grids?
Should we install big PV arrays along freeways to power freeway lighting?
I CANNOT nominate Portland to win this contest. sorry.
==MAX BARBUR BLVD is a huuuuuuge MISTAKE==
BRT is really more ideal by far. You’ll see. It’ll be alright.
I like Ted. He’s ok. We’re down to Grammy or Grampy.
This week’s Stranger has a great one on the Donald.
Keep up the good work.

How would MAX on Barbur be a mistake? Did you read the report that stated that there wouldn’t be enough room on the transit mall for all the buses it would take for BRT?