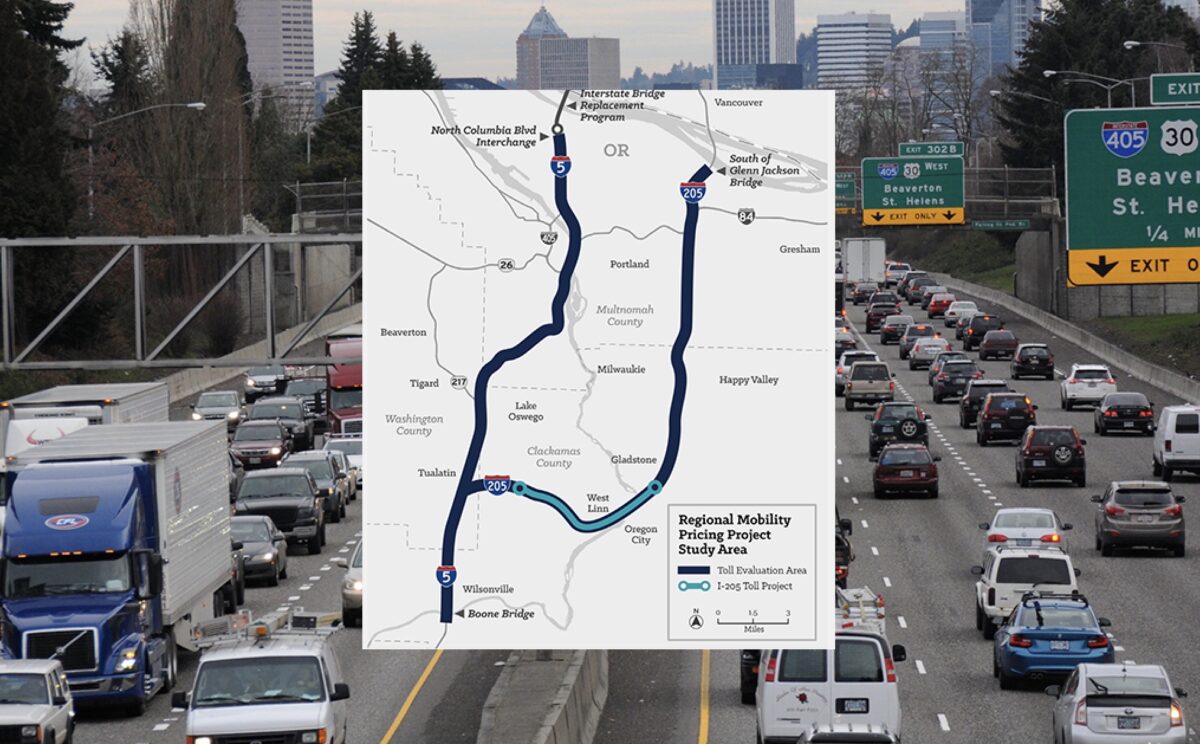 The Oregon Department of Transportation is moving full steam ahead with its effort to expand Portland area freeways.

As ODOT tries to iron out details on their Regional Mobility Pricing Project, which aims to help pay for the expansions via tolls, they’ve opened a survey for the public to share input. Not only is this a good opportunity to tell ODOT what you think, it may also serve as a peek behind the curtain to see what ODOT is thinking about this important issue.

ODOT’s case that these freeway expansions will actually work to clear up traffic bottlenecks without inducing demand and increasing greenhouse gas emissions relies in large part on one key tool: congestion pricing, a.k.a. tolls. 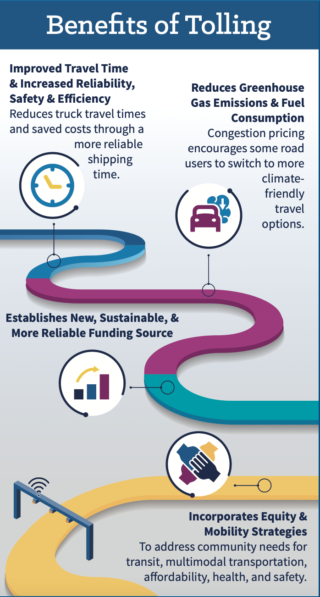 According to ODOT, their congestion pricing rates will vary by time of day, location, and vehicle type in order to help traffic flow smoothly on I-5 and I-205. Evident from the survey is that the agency is expecting pushback on the basis of equity and are thus mulling over low-income discounts or credits, which ODOT seems to be considering implementing at two separate income levels: for individuals making less than $27,000 annually and families of four making less than $55,500 annually (which they say would mean all drivers would experience “improved travel times and reliability on I-5 and I-205”) or for individuals making less than $40,000 and families of four making less than $80,000 annually – a barrier so low, travel time and reliability admittedly might not improve at all.

The survey also asks what people would want to see congestion pricing revenue directed toward, with ODOT saying it “seeks to meet equity goals for toll projects in Oregon by addressing transportation-related barriers and providing benefits for historically excluded and underserved communities.” According to the survey, some of the areas this revenue may target include “local and regional air quality improvement and reductions in greenhouse gases that help reduce climate change effects,” “enhanced transit, walking, and rolling choices to reduce congestion” and “investments in regional priority congestion relief projects [a.k.a. freeway expansions].”

A concern that revenue from ODOT’s pricing program would go straight into more freeway expansion projects is part of what’s driven some opposition to them. Local economist and No More Freeways co-founder Joe Cortright recently pointed out it’s likely simply adding road use fees would solve much of the traffic problems ODOT claims the multi-billion dollar freeway expansions are designed to fix, and should be spent on something else.

According to the survey, ODOT is considering funding “community identified priorities, such as improved sidewalks or transit facilities near the tolled highways” with toll revenue, but this would likely mean an increased toll rate for all road users.

If all goes according to plan, ODOT says the earliest tolling would begin is late 2024.

Learn more on their website and be sure to take the survey if you want your voice to be heard. It’s open through May 16th.

Yes, please please do place the toll gantry structures on the Washington side (WSDOT) as WSDOT already has the staff and mechanisms for collecting tolls…why reinvent the wheel and set up new office on Oregon? 😉

There will be toll gantries collecting revenue from people headed south at the Interstate Bridge and the Glenn Jackson Bridge. But ODOT will be tolling north- and southbound traffic on I-5 and I-205 through the entire Portland region so all sections of the interstates are operating well — not just in North Portland. Oregon’s toll program could expand to east-west corridors next: I-84, US 26. We need our own toll system.

The new CRC bridge design is enabling Vancouver residents to avoid sales taxes by driving to and shop on Hayden Island. Seems far to put a HIGHER CONGESTION charge on this one particular section of the tolling program to limit tax dodgers. IE set the toll high enough to equalize the perceived sales tax savings. So variable tolling based on the location. IE tolling on south 205 would take in considerable less congestion pricing then the tolls over the Columbia River. Washington officials would support this as it incentivizes WA residents shopping in WA.

The survey structure did not ask or make available the option to collect tolling and NOT give to freeway expansion projects. So it’s a lopsided ODOT strategy/survey in that regard.

The income levels for discounts should not be as high as $80,000 for family of four. We do not want families starting new routines in cars because they are subsidized to do so. New families have choices as to how to set up their new family life. Whether they get a toll discount should not be a factor. This is why advertising goes hard after new families. Once these routes and travel modes are established it’s really hard to get them to change later in life. So no discounts for large family sizes.

We could just implement a sales tax. Though I’m also supportive of tolling. but I thik a consumption or value added tax makes a lot of sense and it potentially avoids a lot of loopholes abd distortionary effects of property and income taxes. I know sales tax is a dirty word in Oregon, and just like tolling, opponents will come up with all kinds of equity arguments for why it shouldn’t be done. But also like tolling, there are ways to address equity issues that arise around sales tax.

A little frustrating that 205 is going to be more tolled than 5 to start… that will almost certainly increase traffic on 5 in the short term.

And some of the questions they are asking… I just don’t get it. They have a section about climate change, and float the idea that Lfyt/Uber somehow reduce emissions? I get that they brand themselves as “rideshares” but they are just taxis. And do electric vehicles really need a toll subsidy? Current EV owners skew white and suburban, hardly in line with their equity line of thinking.

Studies of ride-sharing in New York and San Francisco pre covid very clearly indicted that Uber and Lyft have highly negative impacts on per Capita vmt and greenhouse gas emissions. But ODOT isn’t very progressive or open minded in their considerations of climate impacts.

To clarify, by highly negative, I mean the widespread use of Uber/Lyft caused massive spikes in vmt and commensurate increases in transportation related emissions.

And yes, the tolling in Oregon City is going to increase congestion on I-5 through Portland. This is a really bad idea.

Just remember that this is the organization that thought it was a good idea to blow up a whale.

ODOT acknowledges in the survey that tolling will cause many drivers to reroute onto neighborhood streets.

There aren’t going to be any tolls. Voters will make sure of that:

Agree, we won’t put our money where our mouth is. Let’s toll Wilsonville to Vancouver

For the love of Pete, ODOT! Just figure out a toll and implement it universally. Here we go again with making a simple concept (charge motor vehicles to use the road during peak hours) and making it complicated to hit equity goals, socio-economic impacts, and such. Just calculate what you need to pay for things or to achieve less traffic congestion/pollution and implement it. People can figure out if a personal car, mass transit, or a bicycle makes sense for their specific needs.

Sometimes, government just needs to decree something instead of letting the common good get bogged down in ancillary arguments, lawsuits, cries of racism, sexism, etc. This is like deciding that feeding the homeless is a good idea but then watching it never come to fruition because the proposed program does not offer enough organic vegan options to satisfy someone that isn’t even amongst the homeless population.

Haha! Exactly. Can you imagine the line of liars claiming to be low income. There’s no one who can vet these claims and everyone in Vancouver will suddenly be low income

Vote Up1Vote Down  Reply
« First Look at new lanes and paths on Naito Parkway
Family Biking: I shouldn’t feel like a criminal for biking with my baby »