Following the lead of other cities around the globe, the three major transportation agencies in the Portland region want to find new ways to charge for use of the roadway.

The Oregon Department of Transportation (ODOT) is working to implement tolling on Portland-area freeways, the Portland Bureau of Transportation (PBOT) recently adopted a set of recommendations from their Pricing Options for Equitable Mobility (POEM) plan that call for a variety of ways to encourage less driving. And Metro, Portland’s regional planning authority, has been working on ways to incorporate congestion management into the 2023 update of the Regional Transportation Plan.

Given that all three agencies are simultaneously talking about congestion pricing and tolling, we wanted to help you get a handle on each of their approaches and share an update on where things stand.

Metro’s Regional Congestion Pricing Study released back in July, explained how all three agencies are working together: “Metro, ODOT, and the City of Portland are all working on projects that consider ways to price transportation to address challenges related to equity, climate change, congestion, and safety. Each agency makes decisions for different parts of our region’s transportation system. Each has separate projects underway to help address issues specific to those geographies. The three agencies are coordinating their efforts to leverage each other’s work, learn from one another and share findings.”

Metro’s report looked at four different ways to reduce congestion: A VMT charge, which charges people driving per mile in the metropolitan planning area; a cordon method which would charge people driving in a certain area; increased parking fines and roadway charges specific to highways. These methods showed a variety of outcomes, but all were found to be helpful in reducing congestion to some degree. This report also dug into the equity implications that these fees could have. Metro’s report will be a roadmap for policymakers developing the 2023 RTP with the expectation that this updated plan will include its recommendations.

Just this week Metro Council showed it has some leverage, making congestion pricing on the Interstate Bridge Replacement (IBR) project a condition of providing $36 million to continue funding this project. Metro Council ultimately voted 5-1 to support the project, but the agency also adopted a Values, Outcomes and Actions statement with an amendment from a coalition of advocacy groups that requires ODOT to analyze how vehicle miles traveled (VMT) can be reduced by using congestion pricing (and other tools). 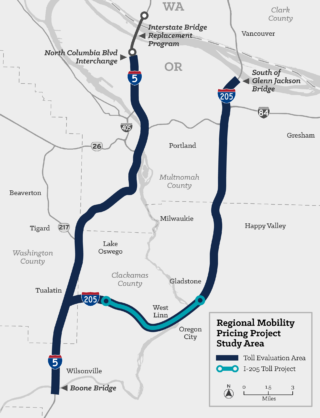 The RMPP and the I-205 toll project both include congestion pricing on I-205. However, the I-205 project will cover the seven-mile stretch of the freeway between Stafford Road and OR 213, while the RMPP will toll the rest of I-205 — from south of the Glenn Jackson Bridge that connects Oregon and Washington across the Columbia River to where it meets I-5 — and I-5 from Interstate Bridge at the Columbia River to the Boone Bridge in Wilsonville.

In its explanation for these tolling programs, ODOT says “tolling is a necessary tool to fix our transportation system” by helping manage traffic congestion.

Revenue from ODOT’s tolling programs would help pay for controversial highway expansions on I-5 and I-205. Tolling programs (also called congestion pricing) in cities like London have used revenue from drivers to fund new public transit projects. This would be the case in New York, too. If ODOT puts all its toll revenue straight back into highway projects, they’ll continue to face stiff rebuke from activists.

Back in October, we reported on the adoption of PBOT’s Pricing Options for Equitable Mobility (POEM) plan. That plan includes a set of recommendations on how to use pricing of car use to increase PBOT revenue. It also gave PBOT a nine-month window to delve deeper into the recommendations and return with an action plan to implement them (which should be around July 2022).

The POEM report looked at both near-term and relatively simple steps to take a flexible commuter benefit program from employers or a parking surcharge, as well as more complicated policies like cordon zones downtown that drivers would have to pay to enter.

PBOT will also play a big role in whatever ODOT wants to do with area freeway tolling. “ODOT is proceeding with the environmental review process of tolling on interstate highways,” the report says. “And the City remains engaged as a key stakeholder.”

We’ll be closely following how ODOT, Metro and PBOT will work together to implement policies recommended in these plans to reduce traffic congestion in an equitable way. When combined, the strategies could have a big impact on how people in the Portland metro area get around.

Is there any consideration of charges for the impact of studded snow tires on roadways? There is nothing abstract about the significant differential impact of this antiquated technology on the shared infrastructure. Studs destroy public highways.

Not only do they destroy roads, they’re actually dangerous. Studs placed wide apart are virtually useless on ice, and actually increase sliding on dry pavement. They are, however, a major profit generator for tire stores like Les Schwab.

An acquaintance was blinded in one eye by a stud thrown up by a car tire while riding his bike across the Hawthorne bridge a few years ago. Wear eye protection when riding.

Revenue from ODOT’s tolling programs would help pay for controversial highway expansions on I-5 and I-205. Tolling programs (also called congestion pricing) in cities like London have used revenue from drivers to fund new public transit projects.

Money is fungible. Whether ODOT “dedicates” tolling revenues to transit or road expansions, it’s a stream they can shift around at will, backfilling from other sources, in the same way that Measure 110’s dedication of weed taxes to addiction service caused the state to pull funds from elsewhere to pay for the schools, which had previously been funded with pot dollars. That had exactly the same impact as if those other sources had paid for drug treatment directly. Expect the same here. If tolling money goes to transit, then maybe the money previously going to transit would go to highway expansion.

Save the “stiff rebukes” for things that matter (like planning those highway expansions in the first place).

It is somewhat fungible. The Oregon Constitution restricts how gas tax and other revenues can be spent. ODOT maintains that tolling revenues are subject to that restriction. Therefore tolling revenues could be spent on building transit only lanes, but couldn’t be used to fund the operation of the buses that use them, for example. Since the bulk of ODOT’s revenues are restricted, they are limited in how much they can shift funds and therefore limited in how much non highway stuff they can fund. If we truly want to see change in how the state funds transportation, we need to remove this constitutional restriction.

The Highway Critters run the show at ODOT. Tell them they can stay and work on highways if they want but it’s going to be in a section that is on the same level as Trains, Transit, People Walking Around, etc, in the Oregon Department Of Moving Stuff, run by Sadik Kahn. The occupant of Mahonia Hall can sweep out the OTC at any time, they do what they do with the governor’s consent.

(this is called a Modest Proposal)

I’ve already seen the results of these road diet disasters in my neighborhood as drivers use our streets as short cuts. It has not made anything better.

PBOT’s Pricing Options for Equitable Mobility (POEM) tabled implementation of congestion pricing (cordon or area pricing of urban centers) and this should have been made clear in this piece.

PS: Several market urbanists/YIMBYs have challenged the fact that congestion pricing is not the same thing as boring 1970s era highway tolling and it’s amusing that city staff also make this distinction: 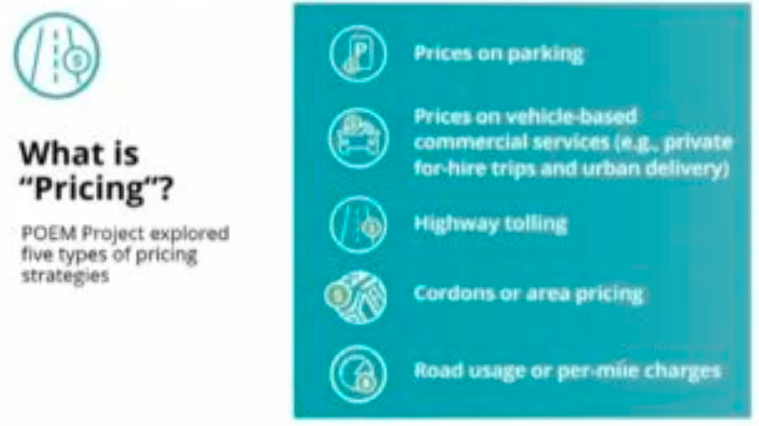 Vehicle congestion and low/stagnant transit usage are interrelated phenomena. Why is there so little attention paid to making bus/MAX feel safer for women, other vulnerable individuals?

Probably because that problem requires dealing with another class of vulnerable individuals who seem well beyond our capacity to “help” (which mostly seems to involve further entrenching the miserable circumstances people find themselves in). Even when the problem is apparent to everyone, it is hard even to openly discuss, and is made vastly more complicated by Portland’s current “tolerate anything” political climate.

For now, sadly, it appears Tri-Met is off limits to folks without a robust helping of physical and biological self-confidence, especially outside of peak hours, unless there really is no other choice.

donel a courtney
Reply to  Gui

I was reading a reddit post, and it was amazing to see how many people, it seemed to be mostly women, commenting to say they no longer ride the Max. A number of them had bought cars. Many of them told stories of guys coming up and propositioning them or smelling their hair, or engaging them in conversation, and when rebuffed following them and screaming at them such that they had to leave the Max car.

Reddit is not any kind of a scientific sample, but it seems that, let alone fixing it, I don’t think anyone is acknowledging how much crime (including the crime of assault–putting you in fear of imminent harm) has impacted our increasing driving modal share.

The goal should be easing congestion through small price variations that change throughout the day. Not a revenue and capitol works program.

Keep tolls collected lower and directly focused at easing the congestion during certain periods of the day. Toll prices could be reported on daily like the weather.