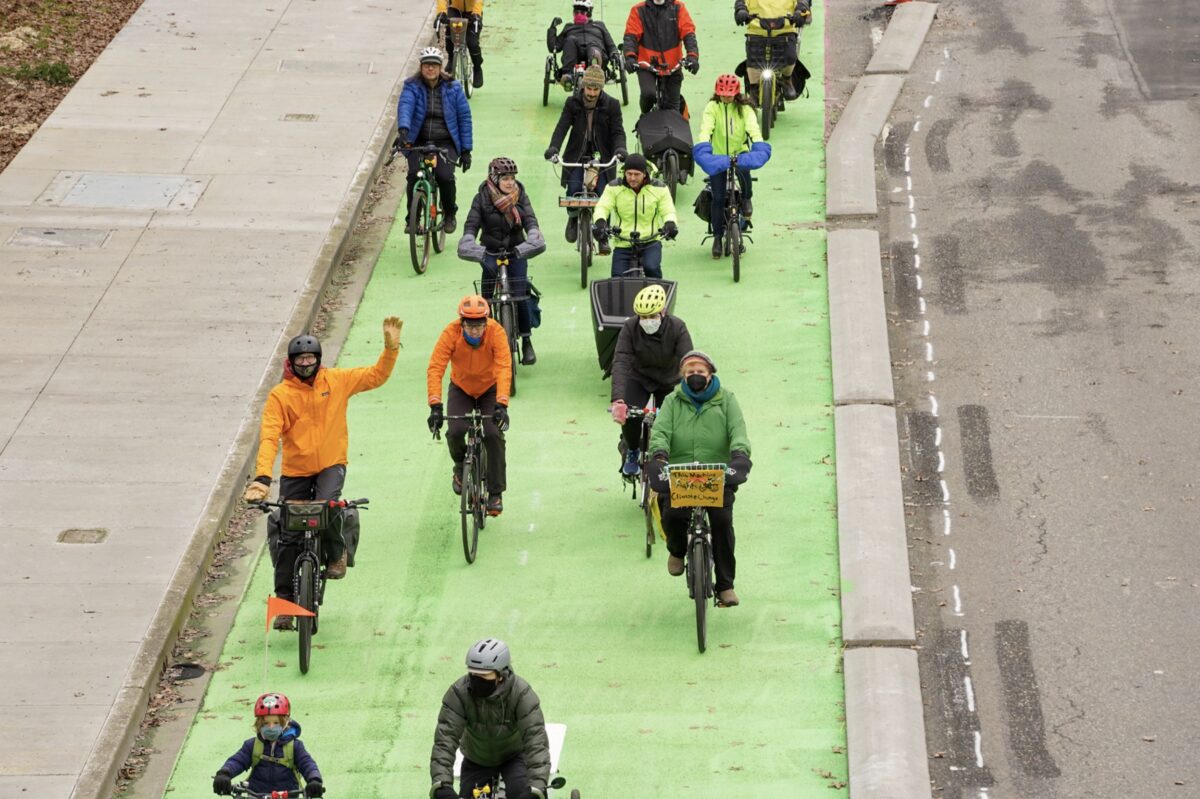 This (under construction) bikeway on Naito Parkway is part of the Central City in Motion Plan.
(Photo: Jonathan Maus/BikePortland)

If you have thoughts on how to improve active transportation in Portland’s Central City, now is your chance to make your voice heard. The Portland Bureau of Transportation is recruiting six new members for the Central City in Motion (CCIM) Working Group to serve a two-year volunteer term.

According to a PBOT press release, qualified candidates will have an expertise or interest in the Central City transportation system, as well as transportation projects generally, particularly related to bike and pedestrian safety, transit priority and freight. PBOT says it is especially interested in the perspectives of people who have experience or knowledge in fields like racial justice, homelessness, climate justice and environmental resiliency, public health and disability rights.

The Central City in Motion plan is part of Portland’s larger ‘in motion’ framework to improve active transportation in the east, northwest, southwest and north parts of Portland.

Last month, PBOT announced several projects from the CCIM plan that will begin construction in 2022. They include the Southwest 4th Avenue Improvement Project, which will repave and reconstruct SW 4th Ave from SW Lincoln to W Burnside, installing a protected bikeway, a bus and turn lane and safer pedestrian crossings. This is just one example of a project that members of the CCIM working group will be able to have input on.

I’m glad to see PBOT is no longer having such meetings in the middle of the afternoon, but is instead opting for 5 to 6 pm, during dinner for most Americans, particularly “of people who have experience or knowledge in fields like racial justice, homelessness, climate justice and environmental resiliency, public health and disability rights.” Might they eventually start meetings at 6:30 pm like the BACPAC does?

What a fascinating report, particularly page 23. Thank you for the link.

With outstanding transit, pedestrian and bikeway access to, and in the central city and a large number of city employees working remotely, remind me why this plan is so important.
Bike commute numbers have decreased in the central city. Telecommuting numbers have continued to increase over the last ten years and have skyrocketed over the last 2 years. Do we really need a plan that addresses active transportation in the central city?
PBOT has failed to implement the East Portland In Motion plan in a timely fashion and as of this spring PBOT has only completed 25% of EPIM projects and the EPIM plan is still $40-50 million short of being fully funded.
Let’s let CCIM sit on the shelf for another 10 years, fund and build out the other “In Motion” projects then reevaluate the central city’s needs.
The East Portland In Motion Plan has gone from a 5 year implementation plan to a 20 year implementation strategy.
PBOT still has a hard time understanding equity.

Jim, those are depressing implementation numbers for the EPIM plan. One argument to continue developing the CCIM plan is related to the prospect of new funds coming to the city over the next several years. Funds that could bridge the EPIM deficit and fund the Central City projects. I’m thinking about federal funds from the transportation package and also toll revenue from ODOT’s pricing program. Toll revenue can be directed to the city to pay for projects along the I-5 and I-205 interstate corridors. That would benefit both EPIM and CCIM. If the CCIM is finished and waiting on the shelf to be implemented, new funds could be implemented quickly. If not, improvements in the city core won’t happen. Let’s do both EPIM and CCIM. Rose-colored glasses??

The East Portland In Motion plan was developed in one year using projects that were promised to East Portland in 1996 from the various Community plans developed when we were annexed into the city. Also used was the East Portland Action plan and Safe, Sound and Green Streets. To my knowledge East Portland received very little transportation funding other than a few repaving projects in the 15 years leading up to the East Portland Action plan. Of the projects done in East Portland during that time period, I only recall the Green line and Red line projects. The Green line portion in East Portland gave much needed improvements to the I-205 MUP. The I-205 portion of the Green line was about $125 million. The other part of the Green line was the transit mall in the central city at a cost of $550 million.
I have a better idea. Let’s do an EPIM 2 plan and really do some good for 200,000 residents of East Portland.
We’ve been duped by PBOT when asked to support the Green Loop project at a cost of $29 million in PBOT funds. We were asked to delay some projects for a year and we agreed. 5 years later we are now seeing those projects built. PBOT has done little to persuade me to think it won’t be more of the same rhetoric that led to that wait. There is little support for PBOT’s promises to East Portland.
I had a senior transportation planner convey to me at a meeting that they were telling other neighborhoods seeking active transportation improvements that because East Portland was getting the Lion’s share of funding, their projects/plans would have to wait. This is patently false. The Central city is the biggest consumer of PBOT’s general transportation revenue.
I still can’t grasp spending $100 million in the central city when so many other areas are in greater need.
I will volunteer for the CCIM committee. Not sure they’d want me.

We should complete EPIM projects and do an EPIM 2 plan first because PBOT and inner city active transportation activists have a long track record of using their white socioeconomic privilege to neglect E Portland.

The Central City is more than just the Downtown office core.

Yes, an expanded CCIM plan. Makes it even less palpable.

With looming cuts at PBOT and with downtown parking revenues way down, where is the city getting all this funding to pay for CCIM projects?

Voters approved a tax in 2016 to fund street repair and safety projects. The City promised to spend 56 percent of revenues raised by the tax on repair projects and 44 percent on safety projects. Our 2019 audit found the Transportation Bureau was not accurately tracking and accounting for costs by those categories. Projects that had spending for both repair and safety improvements were not accounted for separately, making it impossible for the City to assure the public it kept its promise to voters.

We followed up on three outstanding recommendations that had not been addressed by the Bureau. The Bureau still has not changed the way it tracks and accounts for projects to maintain the spending split as promised to voters. It also has not yet shared information with the public about spending compared to its commitment.

Vote Up1Vote Down  Reply
« Thoughts on trains while traveling on a train
Job: Bicycle and Pedestrian Outreach and Education Representative – Intercity Transit »