“Protecting buses from traffic delays makes buses a logical choice for more people… even though these are small segments, they mean big improvements in reliability for transit.”
— Jarrett Walker, transit consultant

The Portland Bureau of Transportation (PBOT) has just announced that it will begin construction on nine projects in 2022 that have emerged from their Central City in Motion and Rose Lane Project plans.

According to a PBOT press release, these nine new projects will be “designed to improve the speed and reliability of transit, provide dedicated space for people who bike, and… make streets safer regardless of how you travel.”

One project announced as part of this construction plan is the highly-anticipated Southwest 4th Avenue Improvement Project. A new fly-over video (below) shows details of what SW 4th Ave from SW Lincoln to W Burnside Streets will look like when this project is complete: there will be a new concrete bus and turn lane — and accompanying floating transit island — to to reduce delays for riders on TriMet lines 9, 12, 17, 43 and 44, improved street lighting and, notably, a left-running protected bikeway on a street that currently has no dedicated space for cycling. PBOT says this construction project will begin in summer 2022 and last about a year.

Here are the other projects (descriptions via PBOT):

This project supports TriMet’s line 15 route change, which will move the eastbound bus from SW Salmon Street to SW Alder Street to reduce travel time and simplify the route. Improvements on SW Alder Street will feature in-lane bus stops and transit priority improvements. The project will result in on-street parking and loading zone changes. This project is scheduled to begin construction this spring and be complete by May 2022.

SW Jefferson Bus and Bike Improvements
This project will improve transit and upgrade bike lanes on SW Jefferson Street between SW 14th and 18th avenues (Collins Circle), decreasing delays for riders on TriMet lines 6, 45, 55, 58, and 68. The project will result in on-street parking and loading zone changes. Construction on SW Jefferson is scheduled to begin in spring 2022 and will last approximately two months.

SW Broadway Bike Improvements
This project will improve bicycling along this important north-south corridor. Improvements include protected bike lanes between SW Oak and Clay streets, signal improvements, and parking changes to better serve passenger and food pick-up and drop-off. Construction on SW Broadway is scheduled to begin in summer 2022 and will last approximately four months.

W Burnside Bus Lane Improvements
This project will improve speed and reliability for eastbound transit riders along W Burnside from 8th to 3rd avenues. The new bus lane will benefit the thousands of Portlanders who travel on TriMet lines 12, 19, and 20. As part of the changes to West Burnside, two eastbound general-purpose lanes will be maintained, while left turns from Burnside to 4th Avenue will be prohibited. Construction on W Burnside is scheduled to begin in summer 2022 and will last approximately one month.

NE Couch Rose Lane Project
This project will improve speed and reliability for westbound bus riders on TriMet lines 12, 19, and 20 by creating a new Bus and Turn lane along NE Couch Street from NE 12th Avenue to NE 7th Avenue. The project will upgrade traffic signal timing to better manage traffic flow westbound and will also provide a bike connection along NE 7th Avenue between SE Washington Street and the Blumenauer Bridge. Construction on NE Couch is scheduled to begin in summer 2022 and will last approximately two months.

This project will improve speed and reliability for eastbound transit riders along E Burnside from MLK to 12th Avenue through the conversion of one of E Burnside’s general-purpose lanes to a bus and turn lane. The new bus lane will benefit the thousands of Portlanders who travel on TriMet lines 12, 19, and 20. A new traffic signal will also be installed at E Burnside and MLK to improve safety. Construction is scheduled to begin in the summer of 2022 and last approximately 12 months.

Central Eastside Access and Circulation Improvements
This project will improve freight access and circulation and reduce multimodal conflicts in the Central Eastside through the installation of a series of new traffic signals (see map). Benefits of the new signals range from improving freight access to I-84 via a new traffic signal at NE Irving and 16th to creating a safer connections for pedestrians and cyclists through the Central Eastside to the Esplanade via new crossings of Martin Luther King Jr. Blvd. and Grand Avenue at Salmon Street. At each location, ADA accessible curb ramps will be installed alongside high visibility pedestrian crossings and bicycle connections to existing bike routes. Construction is scheduled to begin in the summer of 2022 and last approximately 12 months.

Hawthorne Viaduct Bus Implementation
This project will improve transit speed and reliability on the Hawthorne Viaduct on the east end of the Hawthorne Bridge, extending the eastbound bus-only lane along the viaduct in partnership with Multnomah County. This work is part of a larger effort to improve transit speed and reliability along SE Hawthorne, with the section of SE Hawthorne between Grand and 12th avenues completed this past summer and a new BAT lane added at SE Hawthorne Boulevard and Cesar Chavez this past fall. Construction is scheduled to begin in spring 2022 and will last approximately one month.

With major improvements already progressing nicely on Naito, this is more great news! 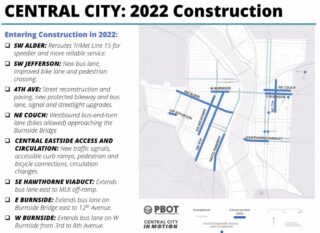 Having functioning transit service in Central City is crucial now that more people are beginning to commute downtown again. PBOT hopes that these construction projects will help smooth out congestion in some of the busiest parts of the city.

Jarrett Walker, a public transit consultant who has worked with the city of Portland on the Rose Lanes Project to improve bus service, says that these bus lane improvement projects are necessary if we want more people to be riding the bus.

“Just as safe cycle facilities make people ride bikes more, protecting buses from traffic delays makes buses a logical choice for more people. While we need more bus lanes across the city, these downtown improvements are targeted at the worst bottlenecks.” Walker said to BikePortland. “So even though these are small segments, they mean big improvements in reliability for transit.”

Stay tuned for more detailed updates on these projects.

I still think a center-running cycletrack would’ve been better – vehicle traffic would’ve figured it out (or not – 5th and 6th come to mind) but this just seems like it misses the mark in so many ways. I’m wondering if PBOT is adding bike signals along the entire stretch or relying on the BAT lane being low enough volume that the turning conflicts aren’t an issue..?

Would be a huge improvement, but anyone else notice that part of 4th where the bike lane is squished between the train tracks and sidewalk? Hoe there’s more space to buffer riders from passing Streetcars and MAX trains.

The bike lane will on the existing sidewalk, which was recently rebuilt as part the adjacent Vanport Building. The sidewalk is slightly wider than usual, because the ground floor of that building isn’t built all the way to the property line…. but not quite as wide as the video implies, because there’s existing street furniture (such as overhead wire poles) that aren’t shown and will need to remain. It’s really not a great solution, but I also haven’t heard any solutions that wouldn’t cost a lot of money.

Why not just keep the bike lane on the right of the road? (not a rhetorical question). I would guess that there is about as much left-turning traffic from 4th as there is right-turning traffic. A right-side bike lane would avoid the bike-only signal and the sidewalk riding portion, the 2 worst parts of the plan.

There are a lot of turning movements from 4th onto the Hawthorne, Morrison and Burnside bridges; at the south end of 4th there’s the conflict with the freeway offramp; and there are quite a few parking garage entrances/exits on the right side.

Yes, quite a bit of bike traffic from OHSU and PSU turns off 4th to access the bridges. This infrastructure would appear to make this route to the bridges difficult and dangerous.

There’s actually a lot more right-turning traffic than left-turning traffic due to the Hawthorne and Morrison bridges; 4th is pretty much the primary access point to these bridges from the south. Currently, pretty much the only option to get from Highway 26 to the bridges is to turn from Market onto 4th, then onto Madison or Alder. Same with all traffic from PSU; there’s no other good route than 4th to get to the bridges I think that’s why they decided to put it on the left.

Now, that issue could be fully remedied if the city would get their act together and simply install a traffic light at 2nd and Clay. It’s pretty much impossible to cross Clay here at rush hour without one. That way traffic could turn from Market onto 2nd (a much less important route for bikes since it doesn’t connect to anything on the south end) instead of 4th to get to the bridges, and the traffic on 4th would be diminished. We don’t see these same issues on Broadway (4th’s de facto couplet in the other direction) because 3rd is a great alternative for drivers with its signal at Clay. Such a simple fix.

If this is the worst part of the design 4th ave might be one of the more straightforward and safe designs PBOT has installed. Kudos to them for getting this in. On the other hand, does it connect to a separated, low-stress network to make it practical? Are they sitting on the Broadway/Weidler couplet because of the Rose Quarter freeway expansion? This is the just the start of a network. My hope is that Williams/Vancouver will get a similar design.

So not really better.
Changing what and where the bike lane is every block or two decreases safety, and ridership.
Parked cars are NOT considered protected bike lanes by experts.

IDK, I think finally having a north-south bike route (4th/Broadway) of adequate width through the heart of downtown is a pretty big deal. Some of the other projects aren’t quite as transformational, but nonetheless quite useful, i.e. linking the future bike lane on 4th to the nice-but-hard-to-get-to path on the Morrison Bridge.

OTOH, There are cyclist who will probably stop using SW 4th once this is completed, or continue to take the lane.

A lot of people at PBOT probably don’t even understand the extent to which this is true.

The very best article on the subject: http://www.aviewfromthecyclepath.com/2013/05/what-it-really-means-to-go-dutch.html?m=1

Some of this infrastructure will greatly worsen SUV/truck congestion. This will likely have a far greater impact on transportation choices than the presence of a few pockets of new micromobility infrastructure.

Shifting mode share from ecocidal and homocidal SUVs/trucks/(sedans) is actually easy and cheap. For example, if we simply blocked off a lane (or two) on every multilane arterial/collector in inner Portland with some of ODOT’s boulders, transit mode share would likely skyrocket.

(I would even recommend expropriating the boulders without ODOT’s permission.)

It didn’t, although in an alternative universe it’s 4th Ave that’s now named César E. Chávez Boulevard instead of 39th.