The Portland Bureau of Transportation has released a list of 20 projects they’d like to build in northwest Portland and now it’s your turn to visit the online open house and give them feedback.

The list emerged from PBOT’s Northwest in Motion (NWIM) planning process that we first profiled back in May. The 20 projects include 10 neighborhood greenways, seven “corridor safety” projects, and three transit line improvements (view interactive project map below the jump). Similar to their approach with Central City in Motion (which passed City Council earlier this month) and Southwest in Motion (which has an open house tonight), PBOT says the aim of this process is to identify and develop projects they can fund and build in the next five years.

Below are two PBOT maps. The first one shows existing and funded bikeways in the NWIM project area. The second one shows all the proposed NWIM projects (“CS” is corridor safety, “TI” is transit improvement, and “NG” is neighborhood greenway): 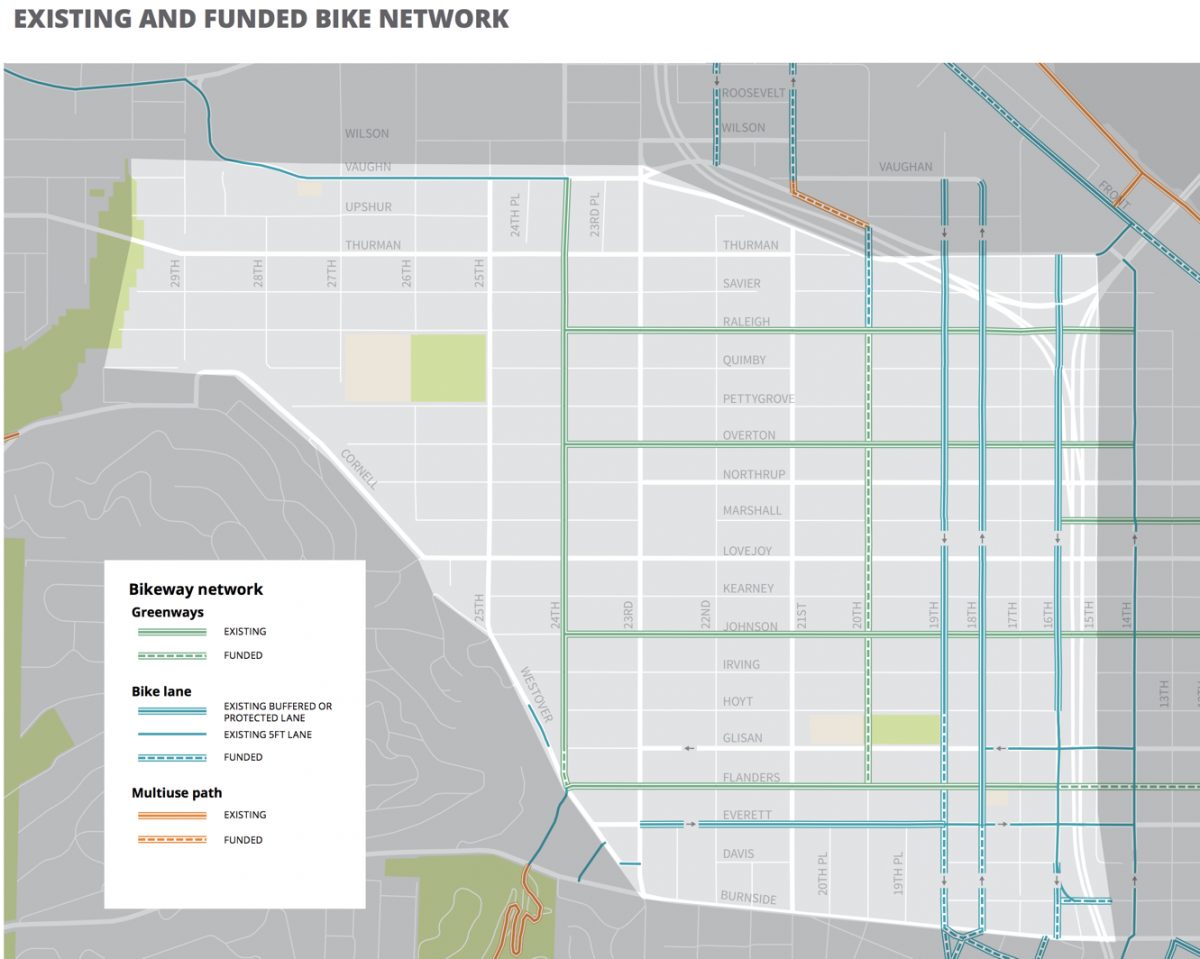 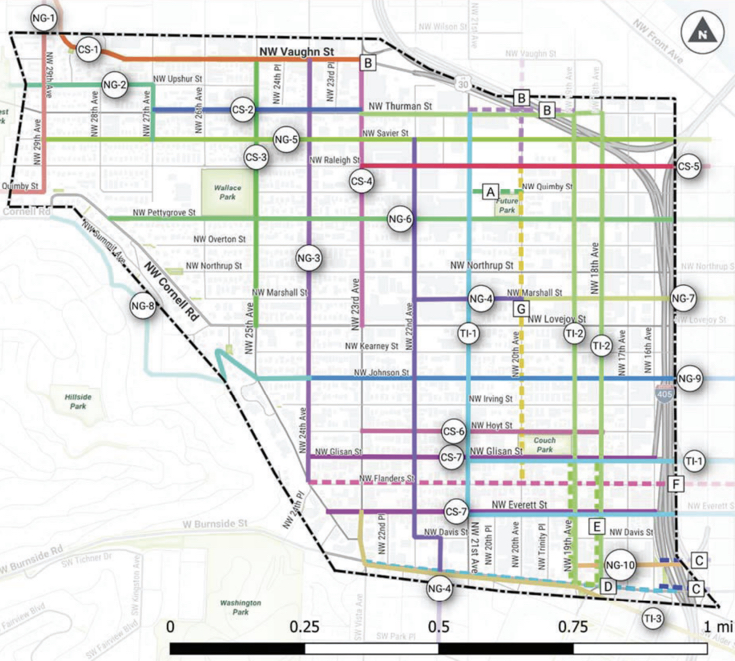 Once the project list is finalized, it will be easier for PBOT to funnel parking revenue and other funding sources to them.

In addition to the project list, PBOT is also using this opportunity to change the roadway classification of some streets. Classifications are important planning designations that often dictate what types of treatments PBOT can use. PBOT has three main cycling designations that make up what they call a “functional hierarchy of bikeway routes”: Local Service Bikeways (for circulation within a neighborhood), City Bikeways (principal routes), and Major City Bikeways (the “backbone” of our bike network).

In NWIM, PBOT is proposing to downgrade Overton, Thurman and Raleigh from City Bikeways to Local Service Bikeways. This change would come with a promise to upgrade Savier and Pettygrove into modern neighborhood greenways. On NW Savier for instance, the proposal is to add speed bumps and sharrows, turn stop signs, and install bikeway signage between 14th to 29th. Other updates include addition of auto traffic diverters, removal of old railroad rails in the pavement on NW 15th, and other changes. Once implemented, PBOT would remove sharrows on Raleigh which is one block south. A similar swap of upgrades and subsequent removal of sharrows would happen on Pettygrove and Overton.

Another key project would be an update to NW Johnson, a crucial east-west connection through this part of the city. PBOT wants to add all the greenway trimmings to Johnson between 9th and 24th and repave the bumpy spots.

A completely new neighborhood greenway is proposed for NW 22nd. It would create a bike street between NW Savier and SW Salmon that would include a safe crossing of Burnside via SW King Ave.

As we discovered during our NW Portland Week, given its density and street grid NW Portland has vast potential for biking. Currently just eight percent of residents ride to work and 44 percent drive alone — despite the fact that PBOT estimates show 37 percent of all auto trips in northwest are less than three miles.

If you live, work, or play in this area, please visit the online open house and help PBOT prioritize investments and make these projects better. The open house will be available through December 13th.

The project list is expected to be finalized by early 2019 and an investment strategy should be passed by city council by this coming spring.

Interesting that Thurman would be downgraded. Surely no one would ever want to ride a bike to Forest Park, right?

If you look carefully, the plan preserves the City Bikeway classification on Thurman across the Thurman Bridge and up to Forest Park. The idea is you would use Savier most of the way and then cut over to the Thurman Bridge.

I think this just reflects the reality that Thurman has too much car traffic to function as a greenway, and removing parking to add bike would be too large of a fight. Improving Savier as a greenway will provide a good route up to Forest Park.

I wear many hats
Reply to  Alan Love

There is a grand ‘Portlandian conspiracy to eliminate any and all bikes from parks. PBOT is likely in the know with Forest Park Neighbors. There is no need for bike routes to the park if bikes are completely segregated out of the park.

Yikes. I would never ride Thurman east of Fat Tire Farm. Savier/Raleigh is a much better alternative.

None of the projects include protected bike lanes. Everett/Glisan, 18th/19th. Without physical separation, Portland will continue to stagnate.

Protected lanes would take away from onstreet car parking, which is MUCH more important than bike user safety. If regular bike lanes are good enough for PBOT, why aren’t they good enough for you?

(My apologies for being snarky.)

Sadly, that is not snark.

For what it’s worth, the fire bureau does not allow parking-protected bike lanes on 18th/19th or Everett/Glisan because it would leave too narrow of a space between the parked cars. And parking is in very high demand in the NW neighborhood, so the idea of removing one whole side of parking is probably not politically viable. Sad, but true.

“For what it’s worth, the fire bureau does not allow”

If we actually lived in a functioning democracy we would not allow some ridiculous bureaucracy to make these decisions for us.

I wear many hats
Reply to  eawriste

Exactly, NW 22nd is full of stop/go traffic every night, as is 23rd. I wonder how any cars will move in this gridded quadrant if more capacity is reduced. Time to chop the bars and split lanes in NW now.
Greenways DO NOT work in urban cores, they just fill up with cars blocking bike traffic. Anyone seen Ladds and 21st at 5 pm?

soren
Reply to  I wear many hats

Yeah…it has the highest motorvehicle trips per day on the Lincoln-Harrison Neighborhood Greenway but was exempted from any traffic calming because vocal rich people who dislike cycling for transportation live in Ladd’s addition.

PS: When is the next Ladd’s addition stop sign sting???

Isn’t it great to live in a city that put’s stop signs on roundabouts?

I was wondering why several stop signs showed up on Overton this week and this helped me understand why. Looks like they’re planning to move the greenway to Pettygrove at some point. Probably a good idea since Overton today is a sorry excuse for a greenway.

Wish they could have waited until Pettygrove construction was under way before mucking up Overton though.

Agreed. I have been trying to remember to take Marshall this week because now Overton is awful and it’s kind of annoying how you have to cut through stopped car traffic to turn left onto Marshall from 16th.

But man oh man removal of the 15th tracks is very exciting to me. Far as I know they have discontinued the practice of paving over them and they will be completely removed as far as Johnson?

I might start doing the same. Traffic is generally pretty aggressive on Overton and the stop signs seem to have increased that behavior a bit. Overton has never felt like a greenway to me.

Lowering traffic volumes would make NW much easier to ride in. I don’t have any numbers, just casual observations, but the destination dining and retail in the area bring in a lot of folks from all over the metro area, most arriving by car. Maybe the city could up the meter rates a bit. Good Sam will always be a traffic generator, both from patients and staff.

What does “turn stop signs” mean?

Changing the street that is stopped.