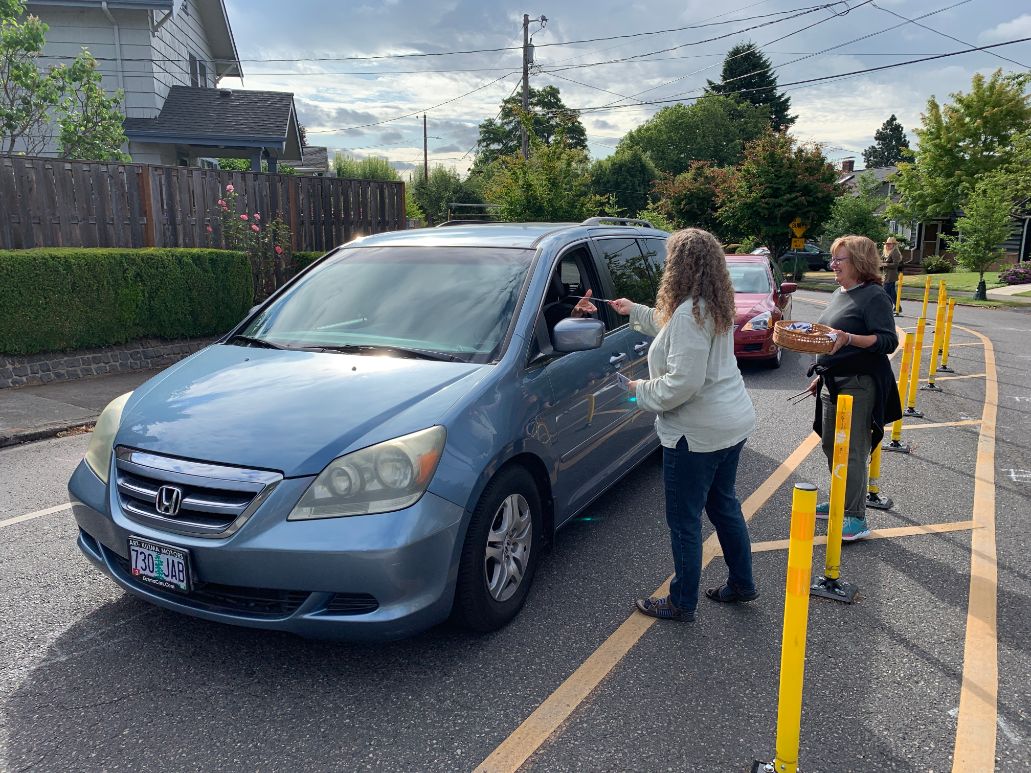 Volunteers with Inner Southeast Action greet a user of SE Lincoln at the event this morning.
(Photos: Brighton West)

Story and photos by Brighton West.

A new community group in southeast Portland organized a ‘Gathering on the Greenways’ as their inaugural event this morning. Inner Southeast Action was formed to embrace change and to promote livability, inclusivity, sustainability and climate protection.

On June 26th, they set up at the intersection of 30th and Lincoln from 7:00 to 9:00 am to create a Breakfast on the Bridges-style event on the east side. They plan to repeat this event three more times this summer on different inner southeast neighborhood greenways.

“This was a great opportunity for cyclists and drivers and neighbors to interact and get to know each other as people, not just ‘drivers’ or ‘bikers’.”
— Andrea Brown, event organizer

The feel of the event was very community-oriented and positive. Neighbors on foot, bike commuters, kids, dogs and even drivers embraced the opportunity to stop to socialize on the quiet, neighborhood street. The gathering epitomized what a neighborhood greenway is supposed to be: low-stress and family-friendly.

One of the organizers, Andrea Brown said, “This was a great opportunity for cyclists and drivers and neighbors to interact and get to know each other as people, not just ‘drivers’ or ‘bikers’, and everyone was really happy about the community building.”

The traffic operation changes at SE Lincoln and 30th have had a tremendously positive impact on street safety. According to PBOT Neighborhood Greenways Program Coordinator Scott Cohen, data shows a more than 16% decrease in vehicle speeds and a 35% reduction in cut-through traffic. These are significant safety improvements for such a low-cost project. Definitely something to be celebrated!

Community members are brainstorming ways to make the intersection even more community friendly, so expect to see some new paint, landscaping or other aesthetic improvements soon.

The next Gathering on the Greenway will be July 24th at a soon to be announced location. Learn more at InnerSoutheastAction.org.

My daughter (6) called the event a treasure hunt. As we approached the event she saw each sign and each chalk message, calling them “clues” to its inevitable reward, muffins! Thanks you Inner Southeast Action. Made our morning commute fun.

A fun event. Drivers, cyclists, and walkers were friendly, and quite a few stayed to chat. Met some folks who were new to the neighborhood and wanted to get more involved.

I think this morning that oversized area of asphalt looked, felt, and sounded better and happier than it ever has since asphalt covered the ground. Repeated reminder to self: bring dog treats next time and make every attendee happy.

Awesome! I think events like this are how you win people over. Super decentralized people just going out and talking to their neighbors in a welcoming environment. Nice job organizers!