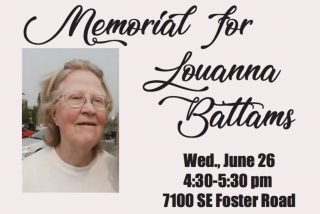 BikeLoudPDX and the Mt. Scott-Arleta Neighborhood will co-host a memorial for Louanna Battams this afternoon (6/26) at 4:30 pm.

Ms. Battams (she was known as “Lou”) was the 82-year-old woman struck and killed by someone driving a car as she attempted to cross SE Foster Road at 71st on June 13th. The tragic death happened just hours after the City of Portland cut the ribbon on the long-awaited streetscape project that’s intended to improve the safety of the street.

According to people who knew Battams, she lived just a few blocks from where she was hit and, “Was a pillar in the Lents community, loved pottery, and is survived by her son.” Battams was formerly active in the Mt. Scott-Arleta Neighborhood Association


At the event tonight friends will share stories of Lou, there will be a moment of silence, and then attendees will walk across Foster as a group across SE 71st.

Here’s more from a statement released by event organizers where they say Foster Road updates are already outdated and recommend more changes to make the street safer:

“The Mt. Scott-Arleta Community is hosting a memorial to highlight the ongoing crisis of traffic fatalities and serious injuries on Portland streets, with the support of BikeLoudPDX. Everyone is encouraged to bring flowers and stories of Lou to share.

PBOT redesigned and invested $9 million to improve the safety on Foster starting back in 2007. This has included wider sidewalks, bicycle lanes, protected turn lanes at intersections, and rapid-flashing walk signals. We applaud PBOT for working diligently over the last decade to see these improvements through; however, the standards we use to design safer streets for people of all modes has changed since the original design.

The 2019 Vision Zero toolkit includes a “rapid-response” measure to determine immediate safety improvements that can be made following fatal crashes. Examples include the bump-outs and
Leading-Pedestrian Interval (LPI) at NE Broadway and Grand after the death of Lori Woodard, and lowering speed limits along Marine Drive after a fatal crash by Mayoral emergency ordinance.

– Add marked crossings every 200-300 feet, as outlined in the 1998 Portland Pedestrian Guidelines for Pedestrian Districts

– Add speed-reader boards to alert drivers of them going faster than the new 25 mile-per-hour speed limit along Foster.

– Install bike lane stencils in the bike lane at each intersection to help prevent people driving from using the bike lane as a turn lane, thereby putting pedestrians at risk.

The memorial event begins at 4:30 pm this afternoon (6/26). More details on the BikePortland Calendar.

To be frank, the proposed mitigation approaches do seem to be based on “vision zero” principles because they do not directly address the primary problem –the fact that people in Portland habitually drive at speeds that are likely to cause death or serious injury. (Insurance industry data suggests that Portland drivers tend to speed dangerously at rates higher than any other major city.)

Matts-Åke Belin, the director of the Swedish Vision Zero academy, has repeated tried to communicate to USAnians what Sweden has done in urban areas to control speed. Sadly, these inexpensive and effective mitigations remain, for the most part, outside of the Overton window of advocates and planners in the USA:

Stockholm is filled with speed bumps and raised cross walks. There are signs everywhere, and I mean everywhere, alerting motorists where walkers and cyclists might be. It works. Cars go slow.

Foster and every other high crash network roadway in Portland should be carpeted with speed bumps and raised crosswalks.

Soren, can you provide source for “Insurance industry data suggests that Portland drivers tend to speed dangerously at rates higher than any other major city”? Have you lived in or spent significant time in another major city to anecdotally confirm this notion?
While things are certainly getting worse in Portland, I don’t think they are anywhere near my hometown of Dallas, Texas or other cities I visit like Loa Angeles or Houston.

A company that uses surveys and telematics to informal insurance company risk models found the drivers in Portland had the highest rate of “at-risk speeding” behavior (55% of drivers):

Really sad. I think elevating and recognizing the victims of these sorts of “accidents” help us all realize the responsibility we all share as drivers.