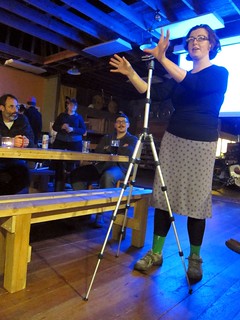 This guest post is by Michael Andersen of Portland Afoot, PDX’s 10-minute newsmagazine about buses, bikes and low-car life.

Dozens of fans of one of Portland’s most unique and durable bike traditions met Tuesday night at bicycle tavern Velo Cult to tell stories from more than 120 mornings of free breakfast on Portland’s bridges.

“It’s amazing to see that this tradition of giving out coffee and donuts has continued for 10 years,” said Ayleen Crotty, who said she and Amy Stork started serving the first regular breakfasts during Portland’s legendary “Summer of Bike Fun” in 2002.

Somehow – like another Portland tradition launched that year, a naked bike ride – the idea stuck.

“We’re going to do it until we’re doing Breakfast on the Bridges for bike commuters on the Fremont.”
— Lilian Karabaic, volunteer

Thanks to modest donations from local businesses – the current sponsor is Trailhead Coffee Roasters – and a gradually shifting team of three to five regular volunteers, Breakfast on the Bridges has been served to bicyclists and pedestrians on the final Friday of almost every month since. (It currently takes place on the Hawthorne Bridge and the lower deck of the Steel.)

Timo Forsberg bragged that his mornings on the bridge had given him not only a “new livelihood” – he’s now a demand management specialist for the Portland Bureau of Transportation – but a future bride. Carl Larson said he’d met two future girlfriends. And onetime Bicycle Transportation Alliance staffer Lillian Karabaic told the story of the time she “abused database privileges” to seat herself at the Alice Awards next to a cute young man she’d met on the bridge. 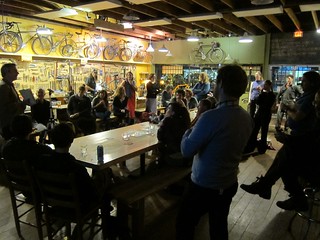 The crowd at Velo Cult.

Weather has never been an obstacle to the tradition, which continues through the winter.

“The colder it gets, the cooler the people you will meet on that bridge,” observed volunteer Robin Bogert, who said she likes to invite prospective romantic partners to attend on chilly mornings and gives them extra points if they actually show up.

Other stories revolved around the devotion volunteers feel to the event, which is affiliated with local bike-fun group Shift.

Shawn Granton recalled the morning in 2006 when he and Elly Blue, who were breakfast volunteers at the time, ran into several Bike Gallery employees offering free maintenance on the Hawthorne Bridge, along with coffee and donuts.

Granton stopped to say hello, but pedaled away miffed.

“I was like, What the hell, man? This is our thing,” he recalled.

And “sometime later that day,” Granton said, a “cease and desist” letter was created and mailed to Bike Gallery owner Jay Graves, expressing concerns about “brand dilution” of bridge breakfasts. The letter was signed “Stinky McDonut.”

Granton said the author’s true identity will never be revealed.

Shift’s Steph Routh recorded a full audio file of the evening’s many stories, which also included the time volunteers held a bacon-versus-vegan cookoff and the time they crashed TriMet’s Center Street bullpen to offer breakfast to early-morning bus drivers.

Breakfast on the Bridges held its 10-year anniversary event as a way to invite new volunteers to join the little team. If you’d like to be part of keeping this monthly Portland tradition strong, email bonb [at] lists [dot] riseup [dot] net

“We’re going to do it until we’re doing Breakfast on the Bridges for bike commuters on the Fremont,” she said.

The current issue of Portland Afoot’s magazine is about finding an affordable transit-friendly apartment in Portland. For a one-time notice when Portland Afoot launches its free mobile edition, drop your email address at PortlandAfoot.org.

“We’re going to do it until we’re doing Breakfast on the Bridges for bike commuters on the Fremont,” she said.

How about starting with the Broadway Bridge? ;p

Um, BonB used to do the Broadway Bridge. For a long time.
The reason why BonB is not there anymore is yet another good story…

You had to be there last night for Storytelling time.

And I’ll also note: I said that I think I was riding with Elly Blue across the Hawthorne Bridge on that fateful morn. But I’m not sure.

She has an ambiguous face.

Sorry about that, Shawn – missed that in my notes.

Yep, you remember right! And I may never stop cackling gleefully about that day.

Is this for pedestrians too? I didn’t think it was kosher to stop w/o a bike.

Anyone traveling by human power is welcome!

It is totally for pedestrians! We need to make that higher profile.

Alas, Mocktails on the Bridge is no more.

Ahem. Can someone recount the story Steph Routh told? It sounds interesting.

Great! My favorite journalist writing about my favorite organizer on my favorate blog. Alas my journey to Swan Island doesn’t take me across those bridges, just the lowly Going Street rail overpass; so I;ve missed all the fun all these years. And we will soon have a new bridge to Swan Island, the Waud Bluff Trail. Would BonB like to team up with the Swan Island TMA to mark its opening? Get in touch.

I think BonB needs to figure out a better way to show the love to pedestrians. I’ve heard multiple times from pedestrians how it seems very exclusive to cyclists, yet many peds walk across the bridges to work every day. Is there a way to be more friendly to all? It might help build more support for cycling in general if it were.

Actually, as someone who’s been volunteering on the Steel for years, we give donuts out to pedestrians all the time. And they stop and chat, too! Although early in the AM, a lot of them are out jogging/walking for exercise and donuts are not on their radar.

But it is, technically, run by a “bike fun” organization, so I think it’s okay that it isn’t Hugely Pedestrian-Oriented. Also, on the Hawthorne, there’s probably about 1 pedestrian for every 10 bikers at those hours.

I walk to work most of the time but bike plenty often. I stop by BonB as a pedestrian. If you say hello and invite yourself in, you’ll be welcomed. It’s the same of most any group. 🙂 Except this is more awesome. 🙂

Thanks for the recap Michael and thanks to all the volunteers for making this Breakfast on the Bridges happen for 10 years running. I’ve been hearing about it for years before ever moving to Portland so it’s awesome to meet all the people pulling the strings.

Sure is a nice tradition for many, but being gluten intolerant I’ve never stopped for a donut. I just wave as I ride by.

Sometimes there is fruit. And there’s always coffee. You should stop and assess the food each time as it does vary. 🙂

I remember that one time they gave me a bagel. It was a really good bagel. I often think of that bagel and I cry.

Article about the Superhero Breakfast on the Bridges 2005:

Oh the coffee on the Broadway was to die for. I even starting carrying my own cup. It was a really good cup of coffee. I often think about that coffee and the cup and I cry. Nowadays I never seem to make it to Steel on the way in. Maybe It’s time, but maybe I would cry and it would be akward. But maybe a story for 2022.

How about defining the 12th Ave. overcrossing as a bridge? Some of us live and work on one side of the river, but have to cross an ugly freeway. I could actually stop there. I could even volunteer…