This morning someone died while walking across a street in downtown Portland. It’s the first traffic fatality of 2019.

A project approved by City Council in November might have prevented it.


According to the Portland Police Bureau, the collision happened just after 7:00 am this morning at the intersection of SW Salmon and Park, just across from Arlene Schnitzer Concert Hall and the Park Blocks, in an area known as the center of our downtown theater and cultural district. “Based on preliminary information,” the police statement reads, “investigators believe the pedestrian was crossing Southwest Salmon Street in an unmarked crosswalk when he was struck by a vehicle that was traveling on Southwest Salmon Street.” The man suffered major injuries and died shortly after at a nearby hospital.

This is a tragedy for our city; not just because we’ve lost another person to traffic violence, but because a project that’s already been planned, designed, and funded could very likely have prevented the death. 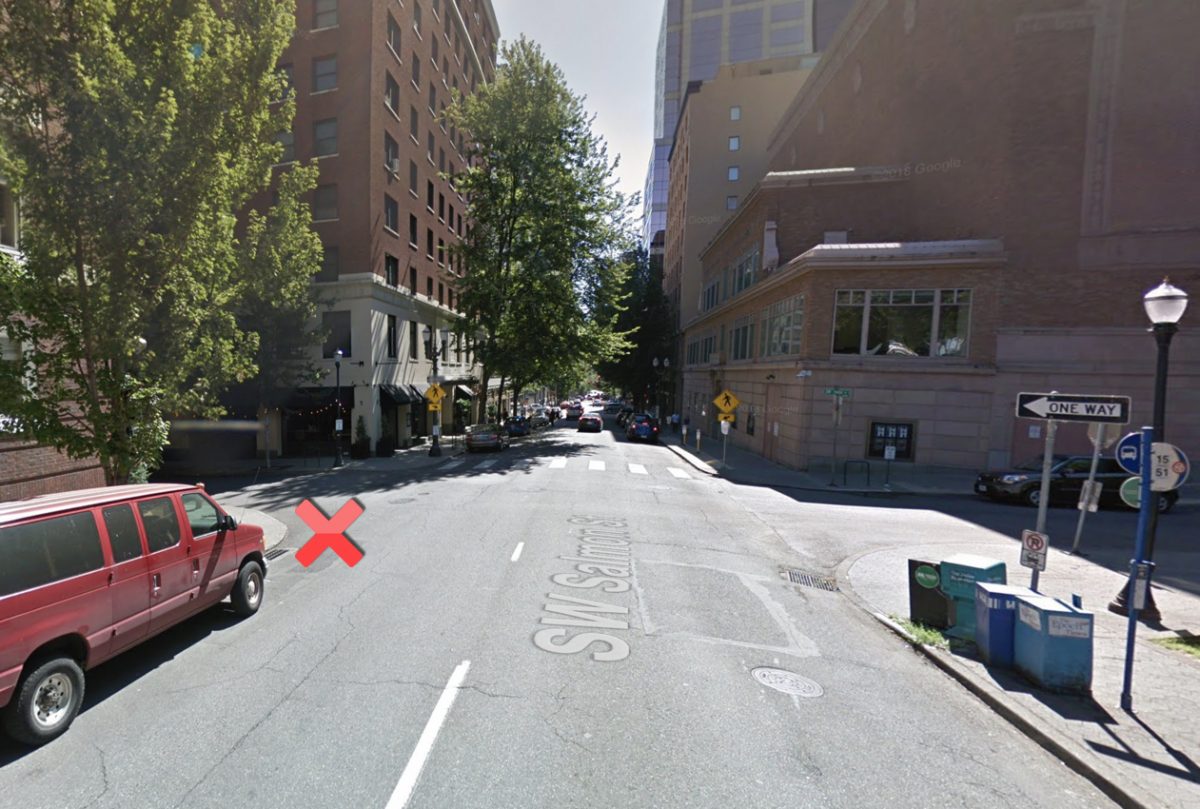 Streetview looking east on Salmon and Park with “X” where driver’s car was stopped after the collision.

In November, council approved the Portland Bureau of Transportation’s Central City in Motion plan. That plan aims to improve downtown streets by making them safer and more efficient for all users. 18 projects were included in the plan, with eight of them slated for implementation in the first 1-5 years. PBOT has around $25 million already in place to start building them.

One of the projects slated for the first phase of construction is Project #8, a $3.7 million upgrade to the SW Salmon/Taylor couplet. Once the project is complete, PBOT says Salmon and Taylor between 14th and Naito Parkway will, “become key east/west bike routes for people of all ages and abilities” and will also include, “Pedestrian crossing improvements.” 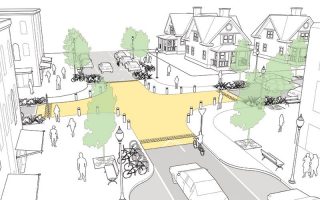 What’s often lost in debates about projects that include protected bike lanes is — especially in Portland — they rarely come with only cycling-related upgrades. In this case, the intersection where the man was hit and killed this morning is slated to be improved for everyone. The project comes with a new bus stop, a protected bike lane, extended curbs to decrease the crossing distance, and fewer on-street auto parking spaces to improve sightlines at the intersections (the space where that big red van is parked in the streetview image above would be a bicycle lane).

Perhaps most importantly in light of this morning’s tragedy, Project #8 will include a “tabled intersection.”

Right now only one crossing of Salmon at SW Park is striped with a crosswalk. Preliminary reports say this morning’s victim was using the side of the street that doesn’t have one. In Oregon we’re told that “every corner is a crosswalk,” and while existing statute might not be so clear (ORS 801.220 says, “Whenever marked crosswalks have been indicated, such crosswalks and no other shall be deemed lawful across such roadway at that intersection”), the onus for safety should always be on the person with most potential to do harm. 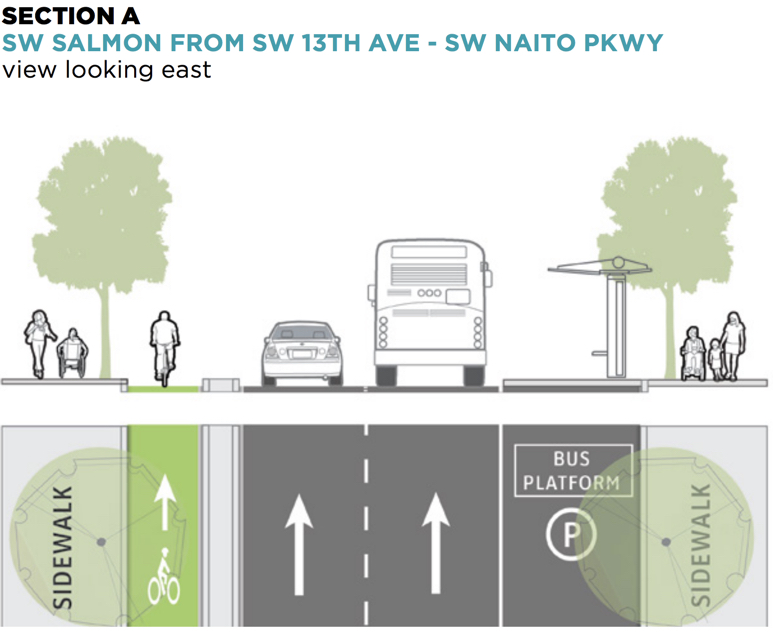 As you can see in the concept drawing and cross-section above, PBOT plans to stripe all four crossings of this intersection with crosswalks and create a large speed table, a.k.a. a “tabled” or “raised” intersection. According to the National Association of City Transportation Officials (NACTO), raised intersections, “reinforce slow speeds and encourage motorists to yield to pedestrians at the crosswalk.”

This morning’s death is a stark reminder that the current condition of our downtown streets is unacceptable. They are a ticking time bomb that we should treat with similar urgency. When streets are dominated by drivers and cars, drivers and cars will dominate. We can’t implement these Central City in Motion projects soon enough. And we need to plan even more of them. Portlanders deserve a safe and inviting downtown where driving is discouraged and demoted, and where a foot on pavement is more powerful than a foot on a gas pedal.