The occasion was a host of updates to a six-mile stretch of 122nd Avenue between SE Foster and NE Marine Drive. The project began as a handshake agreement in 2015 between PBOT and TriMet to improve transit service on Line 73. TriMet agreed to increase bus service if PBOT would make it easier and safer to access the stops. In total, PBOT spent $4.7 million on sidewalks and new crossing treatments. And as of last Sunday, TriMet added nearly 80 weekly trips on Line 73. With a bus coming every 15 minutes or less, it’s now the easternmost frequent service bus line in Portland. 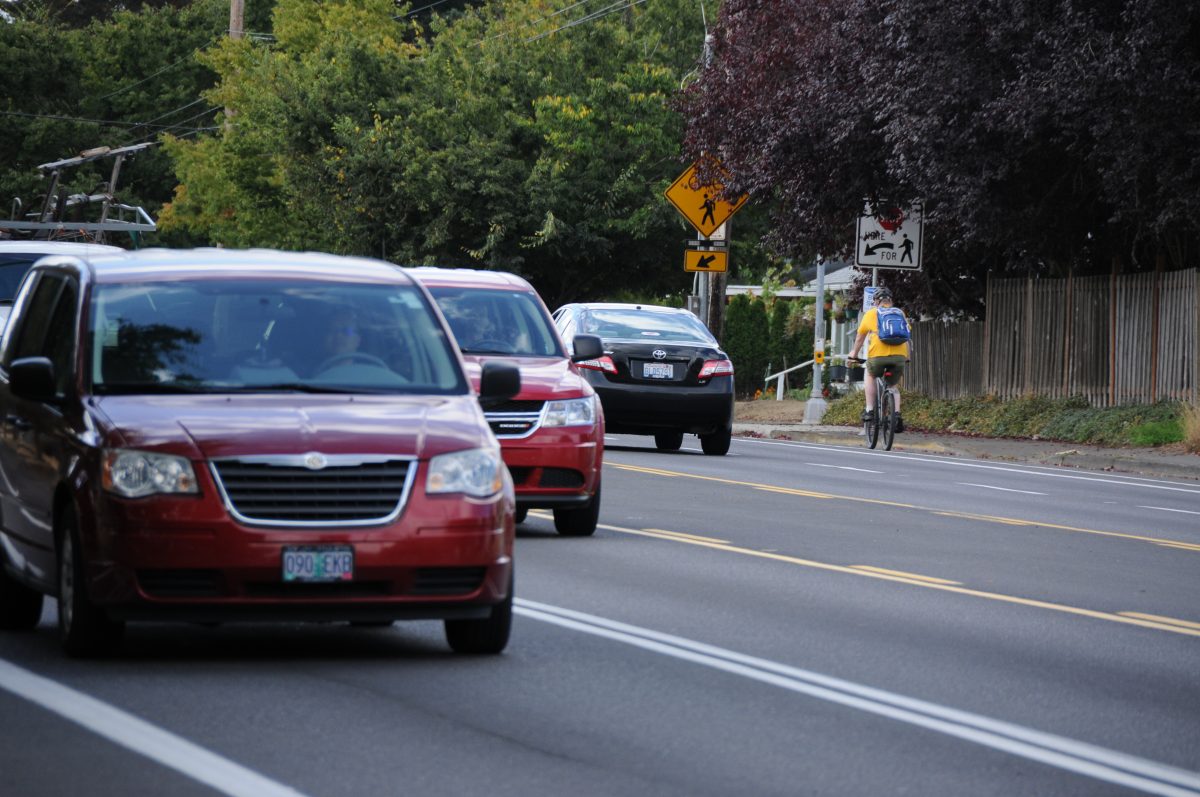 122nd Avenue is a key north-south corridor. It’s also very unsafe due to its wide cross-section and driving-oriented design that encourages speeding and unsafe behaviors.

“We are not here by chance,” Eudaly said during her first official remarks as PBOT Commissioner:

“122nd Avenue is one of our city’s deadliest streets. Last year, three Portlanders lost their lives on 122nd, and this year there have been two fatalities. Sadly, this is not uncommon. residents who live in east Portland are two times more likely to be killed or seriously injured in traffic crashes than Portlanders in other parts of the city. Disparities like this are unacceptable. This is especially true in Portland at a time when we are striving to remedy historic inequities. And especially in a city that has adopted vision zero as a citywide initiative. And we’re not willing to accept them. That’s why we’re here.”

Eudaly and her colleagues also got to cut a ribbon this morning because former commissioner Steve Novick stepped up years ago and made this project a priority. When he penned a letter to Santa in 2013, better transit on 122nd was on his list. Out of respect for his work, Eudaly invited him to speak this morning. Novick did not disappoint.

“You hear a lot of talk about politicians wasting money on pet projects… Well, this was my pet project!” he exclaimed. “And I’m darn proud of it! And I defy anyone to tell the people of east Portland the money was wasted!”

Beyond this project, Eudaly used her time at the mic to share her values and outlook on transportation*:

(*I also thought it was notable that Eudaly took time to mention and thank east Portland advocacy groups like East Portland Action Plan and OPAL Environmental Justice. She also stressed how contracting on the project prioritized minority and women-owned construction firms.)

While new sidewalks, crossings and more frequent buses are a step in the right direction, it will take much more to tame the wide and fast 122nd Avenue. Even with the crowds and cameras at the newly updated NE Stanton intersection this morning, I still saw close calls and aggressive driving.

PBOT isn’t done with 122nd. They’ve set aside a total of $8 million and they want input on what to build next. Help them decide by attending the open house on November 7th at Midland Library (805 SE 122nd) from 5:30 to 7:30. Check out their project page for more information.

Ahhh, the memories of living in EP and campaigning for 122nd Ave funding…

Nice photos, especially those 3-foot bike lanes on 122nd and the I-84 underpass.

Typo: Trimet agreed to increase servoce… should be service

Thanks for all your work David. We miss you here.

And just FWIW, legally-speaking those aren’t “bike lanes” on 122nd ave under I-84. It’s legally only a shoulder because the white striping line is just 4 inches wide. The official bike lane for southbound bike riding is via that narrow sidewalk. thankfully this issue is on PBOT radar and hopefully it will be addressed in the next phase of updates.

Jon, I was referring to the stripes where the crosswalk is, 2 photos down. They somehow don’t look like the 6-foot bike lane stripes specified in AASHTO.

B. Carfree
Reply to  paikiala

It you’re leaving parking in, it looks like you’ve got just enough room to do the road diet, leave the parking curbside, place the bike lane clear of the door-zone (right edge of bike lane twelve feet from curb), do a full width bike lane and still place a (small) buffer on the travel lane side.

It would be unfortunate to do so-called “parking protected” bike lanes. Those just create more problems than they solve, especially at intersections.

this was definitely notable.

i also hope this means that those funded for 6+ years but perennially delayed neighborhood greenways will actually be emphasized again.

I’m sure they’ll be emphasized again, but I have my doubts about them ever actually getting built/striped/signed.

The photo ops are touching but it would be nice to see more action out here. The traffic out this way has continued to become more hellish as city policies have driven people out of the inner city.

I don’t go east of the freeway much, I’m probably on my bike out there 10:1 compared to driving because it’s chaos.

But we had to go to Powell butte a few weeks back so we were out there in the morning on a Saturday….from the minute I exited 205….2 blocks in, I encountered a guy wading out into bumper to bumper traffic mid-block to cross. After the next stop light, a car, in my lane, passing a row of cars stopped at a light, 2 blocks later a car running a stop sign making the turn onto Powell.

this is legal on most (large) blocks east if 82nd. sadly, oregon law protects drivers who hit, injure, or kill people legally crossing midblock from any liability.

just another example of how oregon law dehumanizes pedestrians.

Dan A
Reply to  soren

“this is legal on most (large) blocks east if 82nd”

Source please? I wasn’t aware of this.

Paula F
Reply to  Dan A

A long while back I talked with a PBOT person – if you are >150′ from an intersection it is legal to cross “mid-block”. There a very long gaps between intersections on the east side.

Inviting Steve Novick was a classy move by Commissioner Eudaly.

I assume the new sidewalks referenced by PBOT are those on NE Prescott? (https://goo.gl/maps/Vw3fNPHD7i52) Other than upgraded curb ramps, required as part of the separate repaving project, I don’t think there have been any new sidewalks built on 122nd…?

Christopher of Portland
Reply to  maccoinnich

A small section was built between Chevron and Kmart.

Actually, there were, between Powell and Foster, including a very long section along 122nd between the Springwater and Holgate. They were built between 2013 and 2014, I think.

I believe there’s still unfinished sections between NE Skidmore and Sandy, as well as south of Foster near the Leech Botanical Gardens, all the way to Flavel.

Off all arterials , this is the perfect candidate for elimination of on-street parking to allow dedicated transit lanes the length of the corridor.

There is absolutely no good reason to have on-street parking here. All the businesses have surface lots. Practically no residential fronting 122nd and plenty of cross-section width. Additionally, there are no physical barriers except for the I-84 underpass.

Though I am all for traffic calming, I don’t really see how you can do much when you need to move 15,000 cars a day or whatever. It has to happen somewhere. The development pattern east of 205 relies on super-blocks with auto-sewers the only through streets. What we CAN do is make the other options attractive and passively congestion do the rest.

Sadly, I don’t have a lot of faith in anyone in leadership doing something so bold.

There is a bit of residential between 84 and Halsey and again south of Division.

Is $8 million going to be enough? Hopefully more money can be found.

How do you feel about the equity of the Central City in Motion? “PBOT’s new estimates put the total cost of the 18 projects at $72.3 million. They have $9 million in-hand and an “optimistic budget forecast” of about $30 million.”

Seems like all of these projects need more money.

The EaPo projects are likely, I think, to save more lives.

But we shouldn’t have to pit them against each other.

I feel like I just read a high school senior’s paper on transportation planning.

Are we really in a situation where a person with ZERO experience in transportation policy is leading a transportation bureau of a large American city?

rain panther
Reply to  Middle of the Road Guy

Yeah, was that PR statement even peer reviewed? She didn’t even cite her sources!