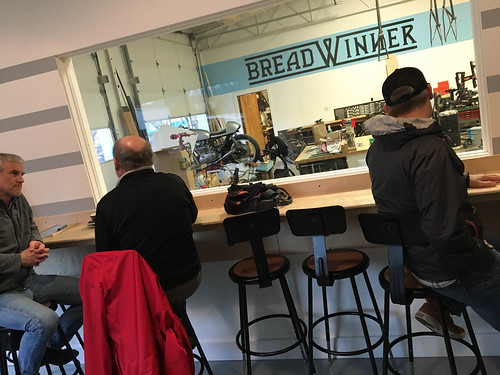 Customers sit at the bar of Breadwinner Cafe with the framebuilding workshop visible through a big window.
(Photos: Jonathan Maus/BikePortland)

The story behind the new Breadwinner Cafe is Portland at its best.

The two guys behind it — Tony Pereira and Ira Ryan — started over a decade ago as bicycle builders toiling in their garages on frames bearing their own names (Pereira Cycles and Ira Ryan Cycles respectively). Then in 2013 they joined forces to form Breadwinner Cycles. That brand and business has matured nicely over the years; but the duo was still cramped for space. Last spring they leased a building on North Williams Avenue and Page Street and have been working all year to renovate the space.

Today they took a huge step forward with the opening of Breadwinner Cafe, which is directly adjacent to the workshop where they build the 10 different models they currently offer. Tony and Ira have gone from framebuilders to community builders. 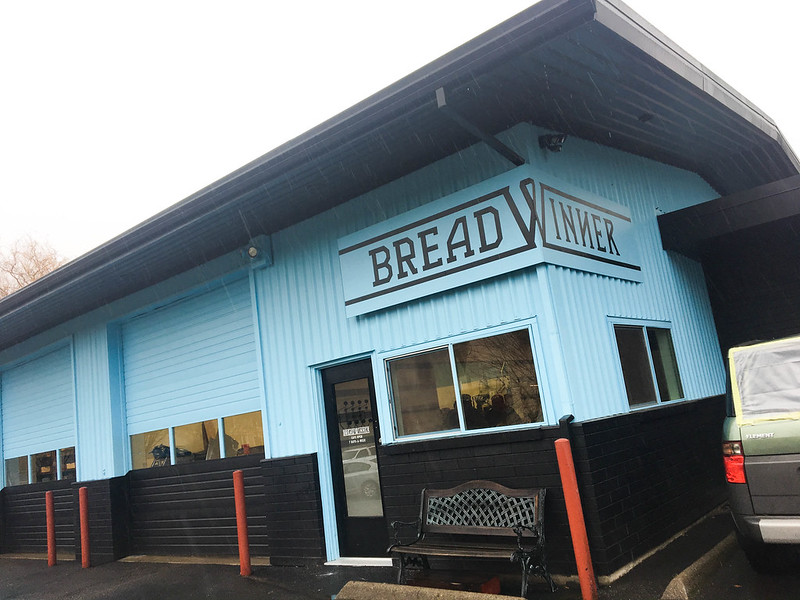 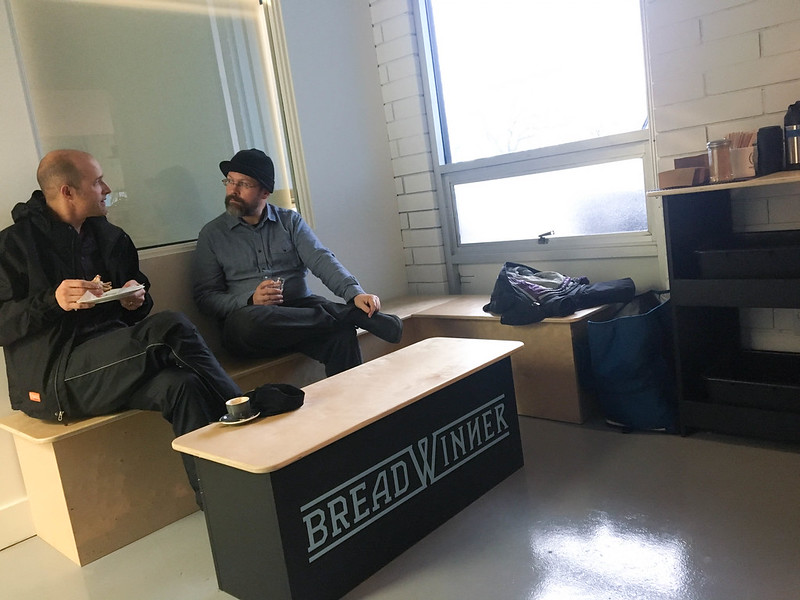 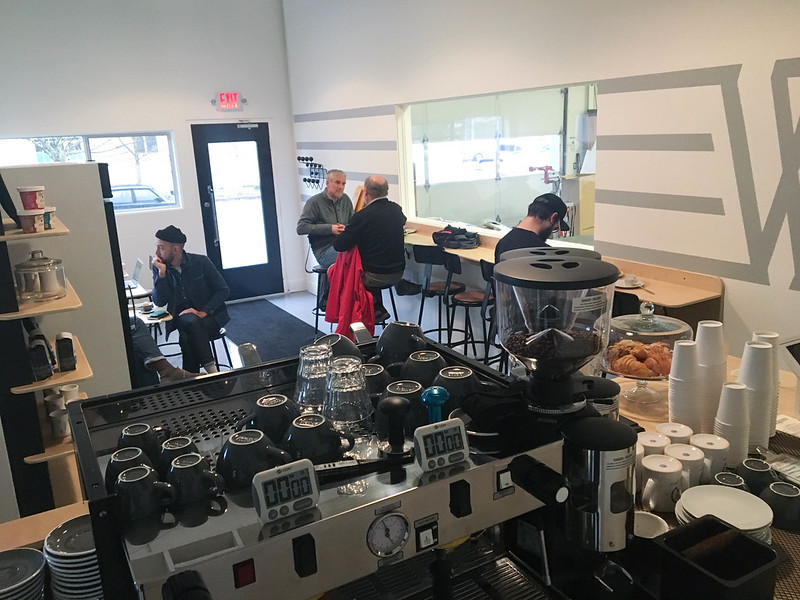 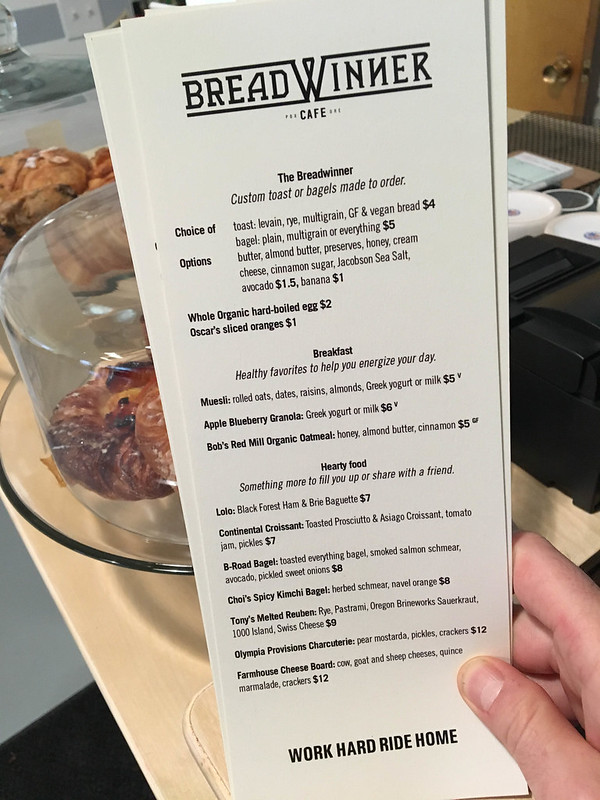 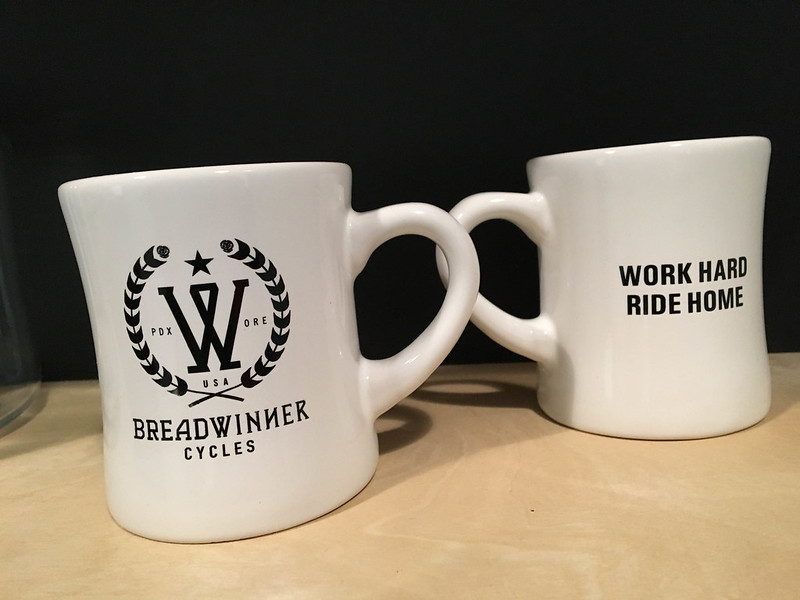 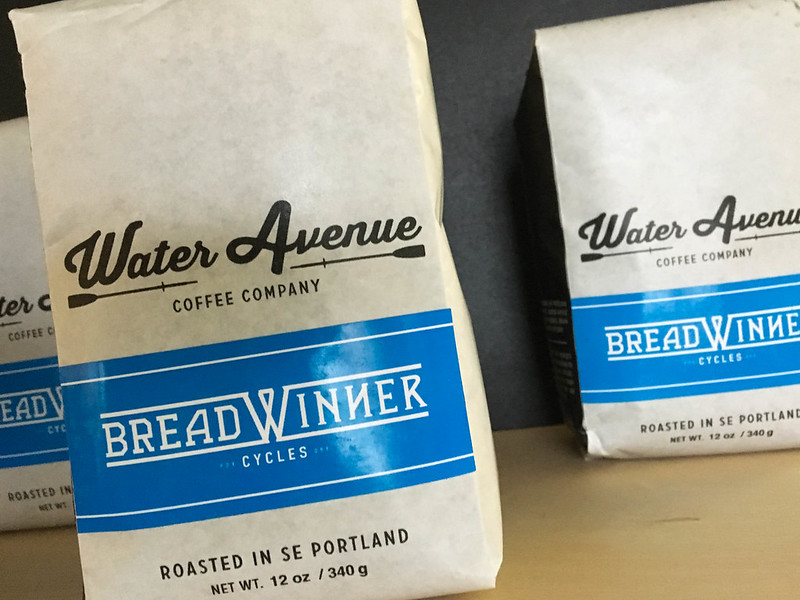 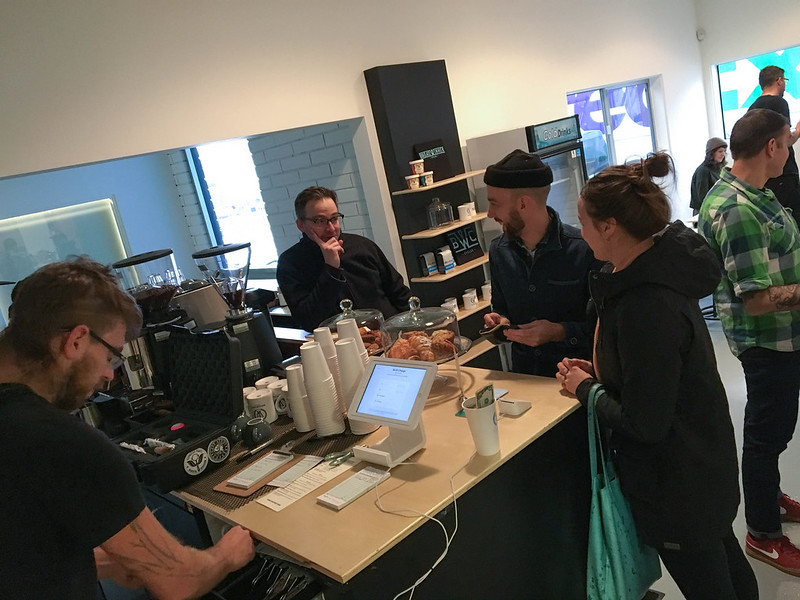 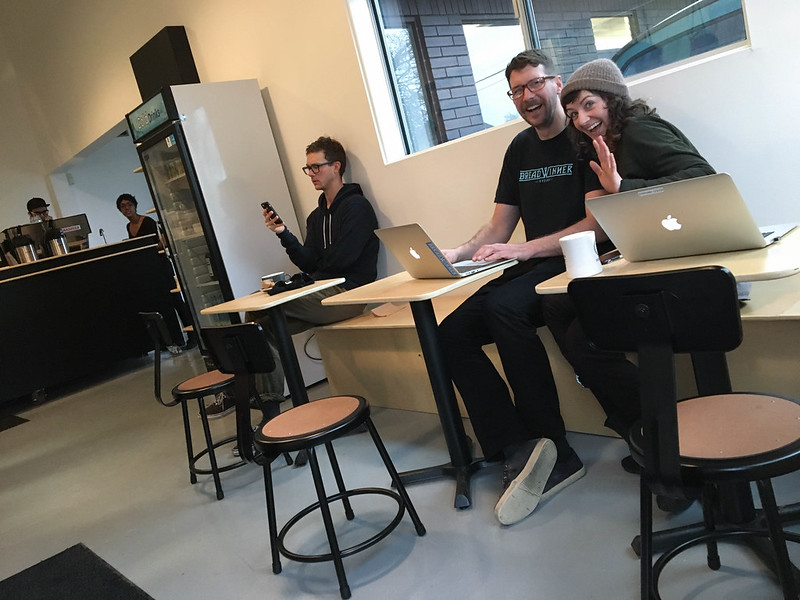 When I swung by the place was buzzing with customers and the sound of coffee drinks being made. It’s a relatively small space, but it doesn’t feel cramped because of the high ceilings and simple decor. There’s barstool seating next to a huge window on the wall shared with the framebuilding workshop where you can sit and stare at bikes being made (a bike nerds dream!). Around the back there’s a sweet little cove with bench seating where its easy to strike up a conversation with friends old or new. A few shelves offer items like Breadwinner t-shirts, their custom-roasted beans from Water Avenue Coffee, and their new mugs with the company’s tagline, “Work Hard. Ride Home.”

While they don’t have a full kitchen, the menu has plenty to offer. In addition to toast and bagel options (add a hard-boiled egg for $2 or “Oscar’s sliced oranges” (named after Tony’s six-year-old son) for $1) and standards like granola, muesli and oatmeal, the menu includes more hearty fare like a reuben sandwich, a ham and cheese baguette, and a “Continental croissant” that has prosciutto, asiago cheese, tomato jam, and pickles. And of course there’s a full coffee menu and plenty of fresh baked goods. For the PM crowd that rides up Williams after work, the cafe is open until 6:00 pm every weekday and offers beer and wine (in cans for now).

This is a big step for a pair of framebuilders. I caught up with a frazzled Ira Ryan for a few minutes as he talked with friends who came to celebrate the soft opening. He’s a new dad with a six-week old girl at home, so getting the cafe up and running has, “Been nuts,” he said. “Tony and I have had this vision for a cafe and social space for a long time,” he added. Ira said he wants the cafe to be like Rapha’s Cycle Clubs, “But not as pretentious.” 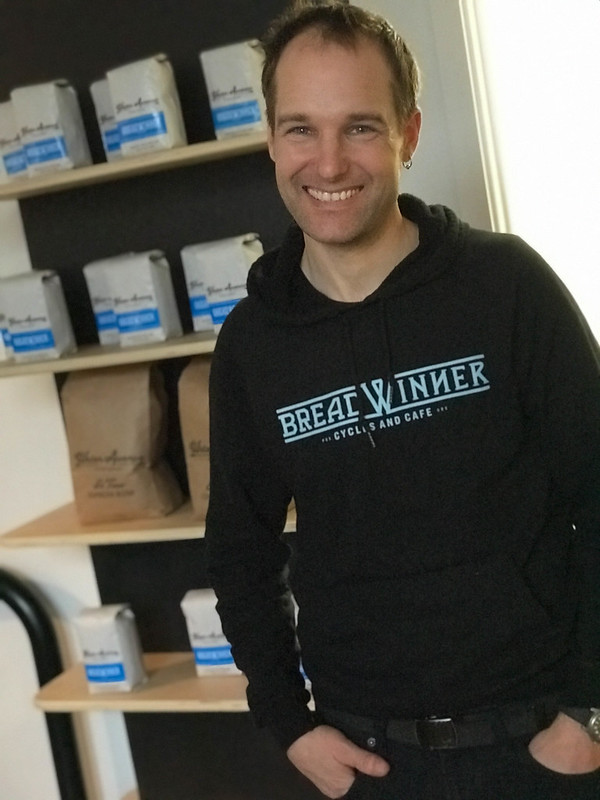 For Ira, the cafe is also a natural central meeting place for what has become an exciting hub of bike businesses. Bike fitter and Physical Therapist Annalisa Fish subleases the space next to the cafe for her Endurance PDX business and cargo bike makers Metrofiets share space in the shop alongside Breadwinner. From the window of the cafe you can see the building that houses another hub of bike businesses. Trusted bike shop Metropolis Cycles is on the corner and through a nondescript doorway is the workshop where well-established bike builders Joseph Ahearne and Christopher Igleheart ply their trades (they too have joined forces with Page Street Cycles). This proximity of builders has already bore fruit as Breadwinner now offers customers the option of an Igleheart fork on some models. The building is also home to Nate Meschke of Signal Cycles and artist/Breadwinner Cycles CX Team member Matt Hall. 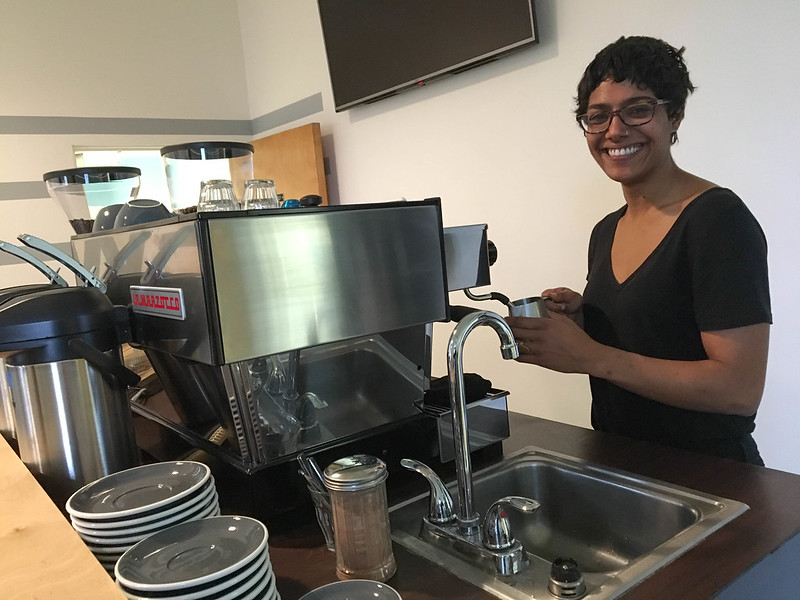 To make the cafe roll smoothly, Breadwinner hired eight new part-time employees — taking the staff total from four to twelve. Charla Chatman is one of the baristas. She just moved to Portland two months ago and was ecstatic to be a part of the cafe. Chatman is also a massage therapist right next door at Endurance PDX, so she can work on your coffee or your kinks.

With its prime location between two of the busiest bikeways in Portland (two intersections just one block away have the fourth and fifth highest average daily bike count according to City of Portland data), the cafe has a lot of potential. Add in the aura of Breadwinner’s brand among the cycling enthusiast crowd who will use the cafe as a meet-up spot for big rides and it’s easy to see this becoming a major spot on Portland’s bike-cultural map.

Can’t wait to check it out.

This is what I love about Portland – people are figuring out that combining different services makes it a destination – not to change the topic about Breadwinner…but Cyclepath is nailing it by serving coffee and beer – it makes me want to go there just to hang out.

Brian
Reply to  Middle of the Road Guy

I visited their new bar for the first time last weekend. Great spot with plenty of bike eye candy! Velo Cult has a hell of a beer list, too. And you can get a good sammy delivered to your stool from the deli across the street.

Middle of the Road Guy
Reply to  Brian

Indeed! CP is much closer to me, and I have been going there since they were in that tiny closet of a store near the diaper place 🙂

point taken. Thanks Jimmy. I actually had it as “massage therapist” but changed it because I assumed that was a legally binding definition.

Super excited to check this out! I can imagine this becoming the ultimate ride meet-up spot for North Portland based rides.

Middle of the Road Guy
Reply to  Kate

Indeed! Maybe Mr. Maus can base a few BikePortland rides out of there? Would be nice to support some local builders that way.

Where is it located? Maybe I missed it, but I didn’t see an address.

dang it I spaced out and missed it.. lol gotta drop in soon 🙂

What do they do about protecting spectators’ eyes from the bright light of welding/torch work?

Middle of the Road Guy
Reply to  Eric Leifsdad

I usually look the other direction.

I hope they can add some sort of covered outdoor seating area as well in the future!