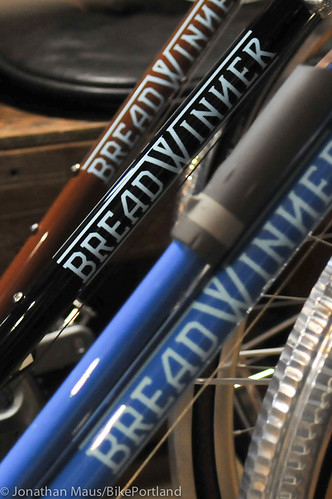 Ira Ryan and Tony Pereira, two of Portland’s most well known bicycle builders, are going all-in on a new company. The duo plan to formally launch Breadwinner Cycles at the North American Handmade Bicycle Show in Denver this weekend.

“We’re coming together to build more bikes for more people,” is how Pereira explained it when I got a sneak peek at the new line of bikes last week.

Breadwinner is more than just a new bike company, it’s the beginning of a new adventure for Pereira and Ryan. After spending over seven years (each) building up their own brands — Pereira Cycles and Ira Ryan Cycles both started in 2006 — the launch of Breadwinner as a standalone bike company marks a significant step in a new direction.

“This is definitely a huge leap for us,” Pereira said, as he and Ryan bantered over final details prior to loading up their new bikes in a truck and driving to Denver for the Big Show.

Far from just another custom bike brand, Pereira says their five-year plan is to establish a factory, hire welders, and make 1,000 bikes per year. 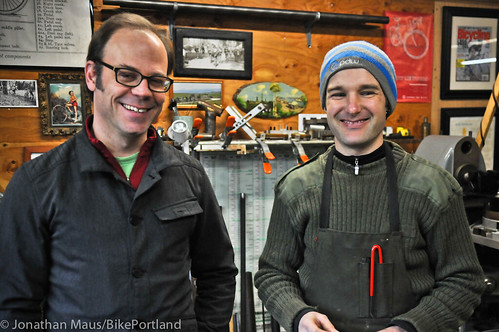 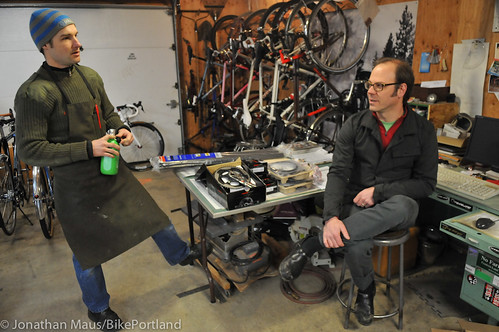 The partnership of these two builders shouldn’t come as a big surprise. They’ve worked together on several past projects, including Rapha’s Continental bike project and the Rapha Bicycle Collection. In fact, they created the Breadwinner name during those projects and when thinking what to call this new endeavor, it just sort of stuck with them.

“Doing the [Rapha] Continental project not only opened our eyes to new markets, we also learned we really liked working together.”
— Tony Pereira

“Doing the Continental project not only opened our eyes to new markets, we also learned we really liked working together,” Pereira said, “Last year at NAHBS we had our booths next to each other and were like, ‘OK, what are we going to do next year, and we started formulating what became Breadwinner.'”

At NAHBS, Breadwinner will pull back the curtain on six debut models: the JB Racer, a 29er mountain bike named after Tony’s late friend Jeff Bates who died from cancer in 2011 (it’s based on bike by the same name that won Tony “Best Mountain Bike” honors at NAHBS 2012); the Arbor Lodge, a city/town bike with classic Ira Ryan porteur lines and Tony’s integrated u-lock near the head tube; the Hole Shot, a cyclocross bike; the Lolo, a race-ready road bike; the Continental, an all-day, all-season road bike; and the Aufderheide, a fully-featured touring bike named after one of Oregon’s most beautiful rides.

I promised to not share photos of the bikes until after their big debut at NAHBS, but rest-assured the aesthetic and builds are everything you’d expect from Pereira and Ryan. Both builders are known for a style that doesn’t shy away from innovation; but that is also strongly rooted in classic lines and timeless angles. Venerable Portland ad agency Wieden + Kennedy helped create the logo and graphics (if you look closely at the font of the logo, you’ll see a mix of Ira Ryan Cycles in the “Bread” and Pereira Cycles in the “inner”) 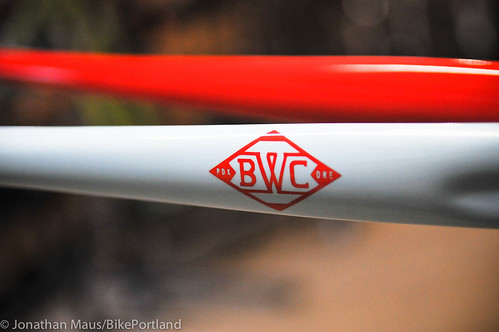 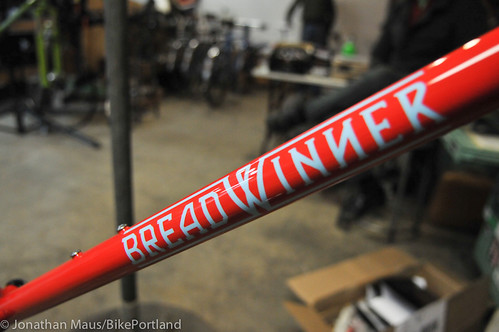 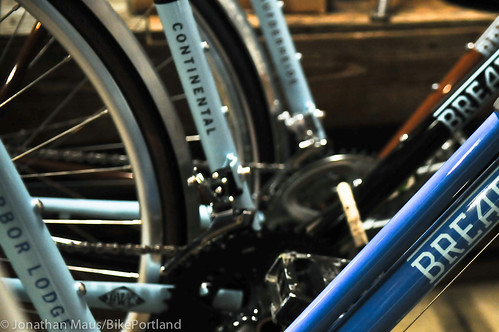 Between the two of them, Ryan and Pereira have decades in the bike industry and they’ve personally designed 100s of bikes. “These six models are our best designs of all those,” Pereira said. And looking at them lined up in his workshop, Ryan added, “This is the distillation of all of those bikes we’ve put together over the years… They’re the bikes we love.”

“For me,” Ryan shared, “Breadwinner exemplifies a lot of the Portland attitude, and we really want this brand to be very Portland. We want to put the essence of this city, and this town’s cycling culture, into the bikes.”

The ordering process isn’t 100% finalized, but the bikes will be “semi-custom” and the plan is to establish a dealer network for sales. The model will be similar to Seven Cycles or Independent Fabrications — two legendary high-end bike brands known for both custom and stock models. 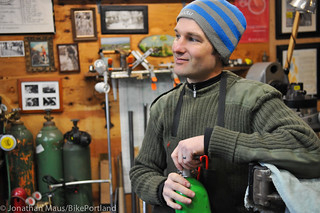 The bikes will be less expensive than if you ordered a bike from Ryan or Pereira directly. The race-ready Lolo, with a mid-range build kit would come in at about $3,995. The parts kits on the bikes you’ll see at NAHBS reflect Ryan and Pereira’s desire to use as many U.S. made parts as possible: headsets, hubs, and bottom brackets by Chris King; bars and seatposts from Thompson; and other components from Paul, Velocity, DT Swiss (made in Colorado), and so on.

Pereira said the biggest plus for Breadwinner customers is that you’ll be able to go from order to delivery in under eight weeks. “We realized our wait times [which can be a year or more] were a huge barrier for a lot of people,” said Ryan, “We’ve had to turn away customers because of our long wait lists.”

While the launch of Breadwinner is a natural evolution for two successful independent bike builders, it’s also a move born out of necessity. Many one-off, custom builders reach a point where their lack of scalability begins to become a burden. Far from the carefree days when they first started building, Pereira, 43, and Ryan, 36, were starting to feel hemmed in by that ceiling.

“There are a handful of builders that have fallen away from the scene,” Ryan explained. “It’s hard. You reach this point where you either have to scale up and invest a lot more or you just quit doing it. This is what we’ve come up with.” And Pereira added, “We’ve both had a lot of changes the past couple of years. Ira got married and Oscar [Tony’s son] is two and-a-half. That changes your perspective.”

Thankfully for bike lovers everywhere, Tony and Ira still love making bikes and if all goes according to plan, Breadwinner Cycles will enable them to keep doing it well into the future.

Good Luck guys! Sounds like a great plan. I can’t wait to see the bikes!

Breadwinner, such an awesome name! I look forward to seeing the bikes this weekend.

“The model will be similar to Seven Cycles or Independent Fabrications”

both seven and IF also produce beautiful carbon and Ti frames. i would really love to see builders of this stature manufacture frames from these materials in pdx.

Jonathan, Thanks for telling our story. I’m absolutely overjoyed to share this news. It’s been so hard to keep our mouths shut while planning for Breadwinner. Thanks for the kind words everyone! Bikes will be unveiled at the show on Friday, but we’ll be sure to have a launch party in Portland soon.
@spare_wheel The future is a big place, but it’s steel for now.

Steel has been around, and developed, for at least 4,000years now. Leave the trendy materials to the others…Portlanders know better. 😉

Awesome news. I think the move to production in higher numbers, reduction in cost and employment opportunities for the craftsmen/women of Portland is great. Good luck with the venture!

Aufderheidi is not actually what you meant to write. Since this is generally a family friendly blog, you might want to change the last vowel to an ‘e’.

Yikes. A quick google check and that is a spelling mistake I’ll be very careful not to make! Glad we got it right on the bike.

I have to admit that I’m a little disappointed at the missed opportunity for some fun with model names, though. “Whole Wheat”, “Baguette”, “Gluten Free”, etc. The possibilities are endless, especially if you consider some of the less mundane things like “Yeast Infection”… or wordplay, like (well, I can’t come up with any right now).

I’m kidding, of course. The current model names are fine.

I like steel, double butted, of course. And “BreadWinner” (dunno about the reversed N that is a Russian capital I…) suggests commuter bike, so I’m optimistic about the Arbor Lodge.

Good luck in your Breadwinner endeavor! That’s a great plan, and I have all faith in your bikes.

Mazel tov, guys, may you get nicknamed “Waterford west” in a few years.

Is there a way to contact them since their site is not live yet?

Dusty,
We are both very easy to contact via info at breadwinnercycles.com
The breadwinner site will be live late tonight. Thanks