[Note: This post was submitted by BikePortland Business Subscriber Northwest Trail Alliance through our Subscriber Post system. We think it deserves a wider reach so we’ve posted it here on the Front Page. Remember, if you are a subscriber you can also be a contributor! We would love to amplify your voice and share your experiences with a wider audience. Sign up here. – Jonathan]

Hi! We’re new to the BikePortland community — and there’s a good chance the Northwest Trail Alliance is new to you — so we’d like to take a moment to introduce ourselves.


We’re an all-volunteer non-profit providing mountain bike advocacy and trail stewardship, meaning we lobby for access, and build and maintain trails. We’ve been around since 1988, known then as PUMP (Portland United Mountain PedalerS), and became IMBA’s first Northwest chapter in 2009.

In 2016, NWTA volunteers invested over 8,800 hours — valued at more than $222,500 — into trail systems across Northwest Oregon and Southwest Washington. Forty percent of our time was spent maintaining trails, another 40 percent planning and building anew. The remaining 20 percent of our time was divided almost equally between mountain bike advocacy and community-building events.

LL Stub Stewart State Park was our biggest beneficiary in 2016, with the installation of a new freeride trail, two new bridges, and trail signage taking the dedicated mountain bike area to a new level. At Mt St Helens, roughly eight miles of beginner and intermediate trail near Marble Mountain was re-opened in an epic single-day effort (our annual SHIFT campout), linking Ape Canyon Trail to Red Rock Pass. And nearly eight of 10 miles of trail lost to logging at Growlers Gulch were reclaimed. 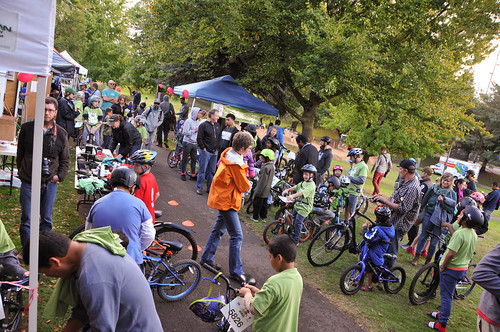 Plus, of course, Gateway Green: The coalition of NWTA and Friends of Gateway Green, working in concert with Portland Parks, Metro, and IMBA, broke ground on the Dirt Lab, which will bring single-track, dirt jumps, a bike skills area, and gravity-oriented features to the park. One-fifth of all our volunteer hours went into these in-the-city venues.

Rework and re-routes increased the fun factor east on Mt Hood’s Timberline to Town trail, amping up its five miles and 125 turns, on the nearby Pioneer Bridle Trail, and on Washington’s Falls Creek Trail. By region, our efforts were split roughly 60/40 between Northwest Oregon and Southwest Washington.

Our work in 2016 brought more trails, greater riding diversity, increased fun, and more close-to-home riding opportunities. It’s a tall order, but we’ll deliver even more in 2017. So the next time you see trail work underway, stop and express your gratitude. Better yet, join one of our trail building teams!

If you ride Northwest Oregon and Southwest Washington, please become a member or donate. Your kind contributions provide the simple basics for each and every trail work party.

The NWTA is such a huge asset to our local and regional community. I would love to see more local partnerships formed to take advantage of what they have to offer. Assistance with trail repair after storms like we just had comes to mind. NWTA was out at Stub Stewart almost immediately to clean up the multi-use trails, and I think there will be over 100 volunteers for the Gateway Green work party coming up. Both are impressive and show the dedication of the group to the areas they enjoy.

Still don’t like the new name, but I still love what NWTA does. If I still lived in Oregon (and had the corresponding opportunities to ride there frequently) I’d still be showing up for the occasional work party.

[Side note: it’s Pioneer Bridle (not Bridal) Trail, since the name was due to its use for horse riding, not wedding ceremonies. I suppose it’s possible people have gotten married there, though. Blasted homophones!]

thanks for the heads up on that mistake GlowBoy. Have fixed it.

NWTA has really stepped up it’s game over the last few years, and the results are evident. One thing that’s not mentioned here is the Off-Road Cycling Master Plan. NWTA was instrumental in getting funds allocated for this. We’ll see where it leads, but it was a huge push to get that project funded. Without that, the community would have been forced to rely on piecemeal efforts, as had been done in the past. Let’s hope for a positive outcome.

What new mtb trails are for THPRD in Washington county? Raleigh Park Swim Center needs it.

At the moment, our sole THPRD engagement is the jump line at Eichler Park. New efforts are commonly initiated by highly-motivated volunteers, and our member meeting this coming Tuesday, January 31st, at Velo Cult is a great way to drop in. Details at http://nw-trail.org/events/nwta-monthly-monthly-meeting/

There are some very small rogue trails in the woods at the Tualatin Hills Rec Center and Kaiser Woods Park which are great for curious kids, but it looks like THPRD is trying to cover them up so people don’t use them. And there used to be one in Pioneer Park before THPRD decided to ‘improve’ it and pave it over with blacktop, at the same time that they told me they were looking for suitable locations for small trails in the district. Ironic. I’d bet there are more rogue trails out there that are being shut down instead of being looked at for future possibilities.

Eichler Park is neat, but it’s too extreme for most kids under 10. I wish we could just dig out some basic beginner dirt loops in the PGE land just south of John Marty Park, but I suspect PGE/THPRD wouldn’t approve.