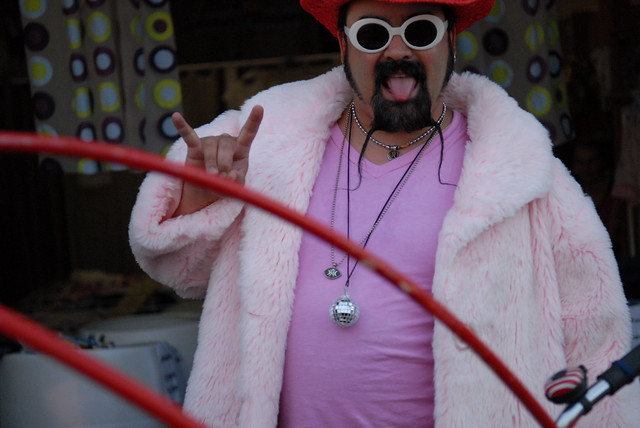 Three months after Portland lost one icon behind its annual Bowie vs. Prince ride, the other has also left the stage.

Prince, a Minnesotan mystery man who matched David Bowie on both musical genius and serious weirdness, died Thursday morning — setting up, among many other things, what will presumably be one of the biggest musical bike rides ever during Portland’s PedalPalooza festival in June.

But for tonight, expect many Portlanders to continue the local tradition of mourning pop icons by rolling around town blasting their beats from bike trailers. 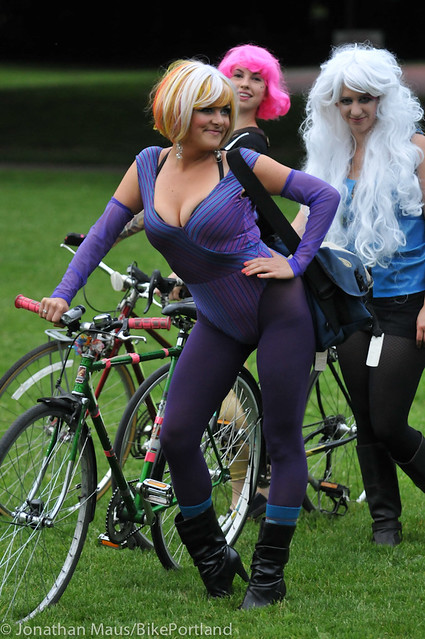 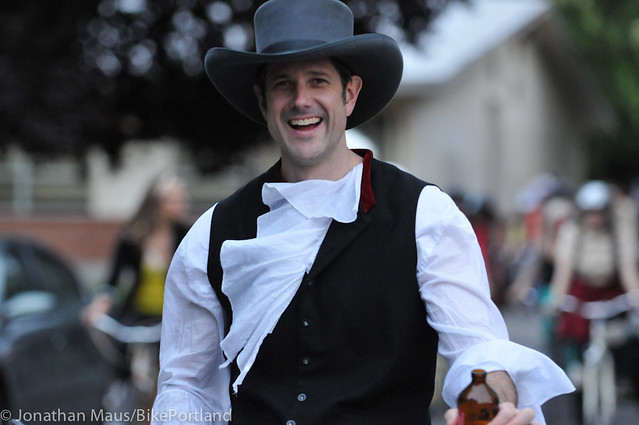 The weekly Thursday Night Ride meets each week at 7 p.m. at Salmon Street Fountain, SW Naito and Salmon. Soon after the word spread of Prince’s death, people began discussing him in Facebook threads about the ride.

“Lots of folks are rocking the Prince theme but nothing official for TNR as we work to avoid any particular theme,” Jones said. “I’m sure some folks will be decked out, but not lots.”

We’ll see. And we’ve contacted Tim Nakayama, more famously known as Diablo and the perennial leader of Team Prince during PedalPalooza, to see if he has any plans of his own to share here.

Update 4:30 pm: Fans may be pleased to know that what purports to be the last public sighting of Prince shows him on his bicycle (and wearing purple):

PRINCE IS GOOD! RIDING HIS BIKE AT #paisleypark VIA #JEREMIAHFREED

Was still healing from the loss of Bowie
And now this 🙁

We were gonna do a Bowie vs. Bowie ride for Pedalpalooza

We’ll see what Lillian wants to do

Nakayama will be hosting a Prince tribute on his KBOO radio show tonight.

So sad to hear about Prince, but sounds like it will be a great memorial bike ride tonight!

is “the city” really mourning? or just a few Prince fans?

Shift should title the ride ” Bowie and Prince” at least for this year.

Bummed that I didn’t see this in time. I’m in Portland today, and would have loved to ride with some fellow mourners tonight.

BTW, the Morrison Bridge was purple tonight in Prince’s honor. Why wasn’t the Tillikum?

It was a beautiful sight on the journey home this evening. I hope he found The Ladder. Bowie and Prince are on the same team, so versus simply does not apply.

The morrison has bridge colors that change for anything within reason – you can even change them for your birthday for a small sum (around $150 or so). The Tilikum’s colors are based on the speed, temperature, and height of the river, and are not alterable in the same way.

Fine. If you don’t want to mourn the passing of an artist who had a major influence on you, then don’t.

Kat, I know what you mean…the one that baffles me most is Ronald Reagan!! How can be ?

Can we have anything on this forum not go ugly and political?

I remember the exact moment I “got” Prince. Exactly the same as the moment I finally “got” Garcia and friends.