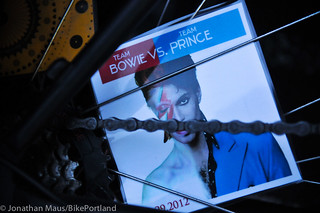 Each summer, fans of two brilliant, proudly weird performers meet in two different Portland spots and then join up to form a huge, glamorous rolling jam with costumes and thumping dance beats.

In 2008, Lillian Karabaic was a twentysomething college dropout living in an anarchist co-op on Mississippi Avenue, working as an Americorps fellow and a program staffer for the Bicycle Transportation Alliance.

I’d seen Velvet Goldmine at least 100 times at that point. Velvet Goldmine and glam rock were very formative in my youth, but my Prince knowledge was pretty low. I had learned choreography to a Prince song as a figure skater, but other than that, not much.

I wish I could really remember what sparked the idea of Bowie Vs Prince, but there wasn’t a conversation or a big idea. It simply sounded like a fun theme for a bike ride. Both artists have such a strong sense of fashion, such a wide-ranging danceable discography, and so many characters to inhabit for a costume ride, I simply thought a mash-up would be fun. 2008 was my first Pedalpalooza living in Portland and I was really excited about putting rides on the calendar – I think I must have hosted four rides, including the first Bowie vs Prince, that year.

I thought maybe 20 people would show up for Bowie vs Prince, and we’d just ride along with the Dropout ride dressed as Bowie and Prince. Turned out, a few hundred people showed up. The park was packed. I really rested on the awesomeness of the Dropout bike ride crew, to this day I still owe a debt to [longtime Dropout Bike Club member] Sysfail for letting us use his amazing sound system – I just had a small boombox on a trailer, not expecting the kind of crowd that showed up. We ended up partying on Mt Tabor until the sun came up, meeting up with the Solstice Ride. It was magical. So we had to keep doing it the next year. Turns out you can’t fight the power of Bowie. 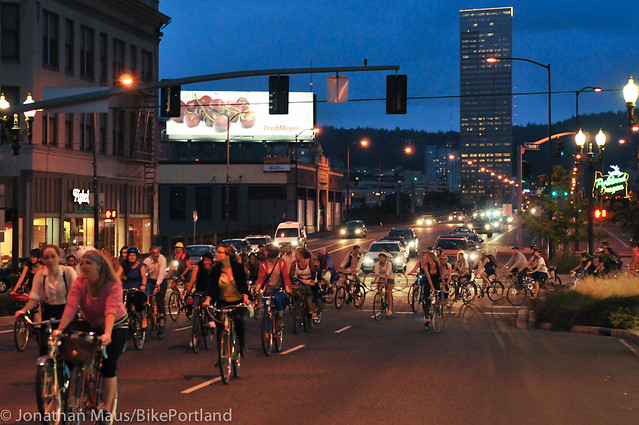 The summer of 2010, I was going to be working in rural India all summer, so I left Bowie Vs Prince off the Pedalpalooza calendar. I was contacted by Diablo, who said “I LOVE Bowie Vs Prince, what day is it going to be on? I want to make sure my ride doesn’t conflict.” I ended up handing off the ride that summer to Diablo, who has been my co-leader ever since. Turns out Diablo had ridden on the first Bowie Vs Prince because he liked Bowie and Prince and ended up started riding his long commute to Vancouver after biking on that ride. So Bowie really does make people start riding bikes. No joke. All the time when I mention I lead this ride, people tell me “OH THAT RIDE? I ride every single year! It’s the only time I pull out my bike!”. In 2012, an Italian bike rider visited Portland based on coming to Bowie Vs Prince. A few months back, a sales clerk at the vintage store told me “I start commuting to work by bike every May to get ready for that ride because I love David Bowie! My husband and I do it on a tandem!”

David Bowie has done so much in his life’s work, but one of the lesser-known things is getting more people in Portland to ride bikes, even if just one day of the year.

Kooky ideas, a culture of creativity, technical know-how, unexpected connections and a venue for fusing them all into something new and awesome — those are the things that great cities are built on, whether it’s postwar London, 1980s Minneapolis or modern Portland. 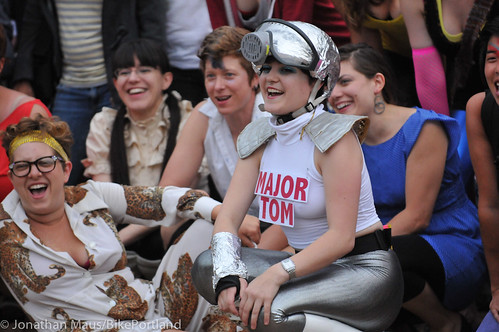 Commencing countdown: Karabaic as a
Bowie character in 2012.

Karabaic went on to get an economics degree from Reed College and now works as a development manager for the Community Cycling Center (and, among other things, as the volunteer producer and co-host of the BikePortland podcast). A couple more notes:

• Bowie Vs Prince has come up in her job interviews … twice.

• She was considering ending Bowie Vs Prince this year, which will be the 9th ride, because it’s gotten so large to manage & organize. “But I think I’ll have at least one more in me in memory of David Bowie this year,” Karabaic says. “My dream is a wedding between a cosplay David Bowie and a cosplay Prince. Once I’ve done that, I’m done.”

As we reported earlier today, Karabaic will lead Team Bowie in a memorial of the star’s life this evening: meet at 5 p.m., ride at 5:30. After that, just follow the sound of Ziggy Stardust’s voice.

I should look in my archives. I brought my camera along for one of the Bowie vs Prince rides in Portland in either 2011 or 2012.

The ride has such fame that I went on it just to check it out. I’m neither a fan of Bowie or Prince.

Why would anyone admit to this? I hope that nobody danced near you. Bowie is far more important than any organized ride. Yeah, IS!

That’s not very nice! We’ve got room for all types at Bowie Vs Prince as long as they’re nice 🙂 Dance next to anyone you like, Bowies.

The Bowie v Price ride is such iconic Pedal Palooza, that I just assumed it was an older ride…back in the earlier generation…back in the Ladies of Timo ride, [preWorld] Naked Bike Ride, etc.

Ladies of Timo was actually 2009! How time flies.

(It was possibly also the best ride of all time.)

Actually, it was 2008 (http://www.shift2bikes.org/cal/viewpp2008.php#16-202), and I must give the brilliant Bikemore all props for the concept and execution.
Thanks LK for the memory, and for making Pedalpalooza rock for so many years.

mran1984
Why would anyone admit to this? I hope that nobody danced near you. Recommended 1

That’s not very nice! We’ve got room for all types at Bowie Vs Prince as long as they’re nice 🙂 Dance next to anyone you like, Bowies.

I met my sweetheart because of this ride – he bought a beer for the girl standing in line behind him at the bar dressed as Jareth the Goblin King.

What happened in Minneapolis in the 1980’s?

What an amazing woman! Thanks for being a part of what makes this place special and for celebrating Bowie.

The first ride in 2008 was my first big party ride experience, and part of the inspiration for a ride we do in Eugene.