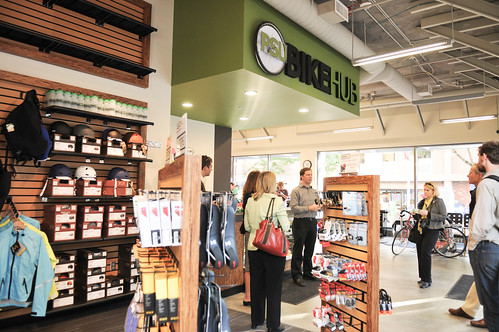 Portland State’s football team isn’t the only thing getting national attention these days: the school is now ranked among the top five in the country in terms of its bike-friendliness.

This achievement comes four and-a-half years after PSU’s head of parking and transportation Ian Stude, all but promised it would happen. In March 2011, after PSU had earned a “Silver” designation, Stude told us, “I have no doubt that you will be hearing from us again soon with news of our rise to Gold (which they earned in 2013) and eventually Platinum.”

To justify their Platinum award, The League says PSU’s support for cycling has, “helped reduce congestion, improve air quality and lower the demand for parking on campus.” The League also noted PSU’s indoor bike parking, low-cost rentals and their on-campus Bike Hub retail and repair shop. PSU has 2,200 bike parking space on campus — a six-fold increase in the past decade.

Interestingly, the League’s announcement comes as biking rates at PSU are actually in decline. As we reported last month, PSU’s own survey’s show that rates of biking to campus are down by a third since hitting a peak in 2011 — from 12 to 8 percent.

A newly formed bike activism group on campus, Bike PSU, says the reason for the decline might be that people feel like cycling in downtown Portland is simply too dangerous.

I have a hard time finding a spot to lock up these days at PSU – which is my sign things are still good. I still question the methodology of the survey since they chose not to report error measures. I know next time they will add that to the analysis.

Paul,
Your observation matches data collected from routine bicycle counts on campus. BikePortland has been provided this data, which contradicts the decline in bicycle trips shown in our annual survey. However, to date, BikePortland has chosen not to publish this information.
Ian

Hey Ian, thanks for writing. I think you’re referring to the counts of bikes in long-term and short-term bike parking, reported on p. 20 of this document. That document was the main data source for and the first link in our story last month about the reported decline in biking to PSU, but you’re right that my article didn’t call direct attention to thos parking stats. That certainly wasn’t out of any desire to make PSU look bad — it was because the number of bikes being stored on campus didn’t strike me as a fantastic measure of the number of people getting to PSU by bike. That’s the variable I was looking at.

Obviously the two are related, and I totally agree it’s odd that surveys are so consistently showing drops in both occasional and daily bike use even as direct observations show the number of bikes stored on campus climbing. If you think the number of bikes parked on campus should give us reason to doubt the behavioral surveys, that’s relevant! This is the first I’d heard that you do.

I don’t know how the number of students and staff who are likely to be at PSU at any one time has changed over the years. Maybe you do? That would help further unpack what’s going on here.

So, a bike rack full of left bicycles is a better metric that counting the actual bodies on bicycles? Disagree.

Sorry, I realize that is an intrinsically negative statement and takes the conversation down a notch in tone. So, let me try again…

At my work there is a pretty nice and secure bike room. As it happens, one of my coworkers stores a bike there. I think he uses it on nice days for waterfront rides. However, he doesn’t use it regularly for commuting. He’s a casual, fair weather cyclist.

This informs me that simply claiming that every parked bicycle represents total usage is short sighted. Instead, being present in the area of usage (ex: on a busy street corner) and counting the number of bikes that go by is far more relevant.

Hopefully this comment will recover the spirit of discourse.

As is far too common, LAB gives out awards that imply a lot of cycling is going on, but on further review, it’s going the wrong way. The problem is that these awards aren’t based on wheels on the street; they’re based on things that LAB thinks will put wheels on the street, many of which simply don’t work (or don’t work in the context to which they are applied.

in order to increase PSU bike commuter numbers, the PSU Bike Hub should immediately hire a dedicated charismatic greeter at the Bike Hub. To some, it’s a dangerous, risky, and way outside of the box idea, so much it’s as if the box is Earth and the concept of bike hub greeter is like the birth of a sublime star light years away, but it could not only be a game changer, but THE game changer.

Then where is the completed Red Electric Trail and the Willamette Shore Trolley Trail?

I went to PSU for about 2 years. I got to bike-commute to the main campus and to the new CLSB on the waterfront. I thought it was great. They offer covered parking in multiple locations and the bike hub was fantastic. For an average of less than $3 a month you get access to all their tools which is amazing when you live in a small apartment and don’t have room/money for all that crap. AND they will teach you how to do repairs as you need them. Not to mention that the membership price for some stuff is cheaper than you can find online or anywhere else in Portland. For students on the edge of financial disaster they can literally make the difference between sweet, sweet biking freedom and trimet purgatory. What could matter more than that? Large ridership is nice, but enabling the people who really need it – that’s what I value about PSU’s biking policies/programs. Sorry for the rant, I’m just appreciative of what PSU and the Bike Hub has done for myself and others.

As a current PSU student, and co-founder of the student advocacy group Bike PSU, I feel that the Bike Hub and Parking & Transportation Services are doing a fantastic job at improving and maintaining the facilities they have control over. This includes not only all the outdoor bike parking, but the six or seven secure indoor bike parking rooms spread throughout campus (with more in the works). The Vike Bikes bike rental program has been growing swiftly. Having access to repair tools and hands-on assistance from the mechanics is more than anyone could ask for.

However, there is something crucial that the university does not have control over. That is the streets leading to campus. To say that bicycle infrastructure leading to/from campus is lacking would be an understatement. I’ve spoken to numerous students, both those who bike and those who don’t, that say they are very frustrated by the lack of bike infrastructure in downtown Portland, particularly leading from PSU to the bridges. This frustration is one of the reasons that Bike PSU formed. We’ve been in contact with the city and have begun attending public meetings such as the Downtown Neighborhood Association’s transportation meetings to voice our opinions on how the $6 million slated for the multi-modal downtown project should be spent.

Any PSU students who want to get involved are welcome to join the Bike PSU facebook group or email us at bikepsu@pdx.edu. We’re having a general meeting this Monday at 6-7pm, as well as a social ride on Wednesday at 2-4pm. https://www.facebook.com/groups/BikePSU/

Thank you to Mr. Stude and your colleagues as well to as Mr. Fittipaldi, and Mr Atkinson, for all of the work you have done, are doing, and will do to make PSU a safer and preferential place to bicycle to and from.

Well done and keep up the good work everyone!