PSU now among top four most bike-friendly universities in America Portland State University is in some very elite company atop the national Bike Friendly University rankings announced last month by the League of American Bicyclists. PSU has improved from their “silver” award in 2011 and is now one of only three schools in the “gold” category (Stanford is the only university to have received Platinum.)

Cycling at PSU has skyrocketed in recent years and the university has responded with bike-friendly policies, programs, and infrastructure. As of 2012, a survey (taken by 960 employees and 1,109 students) showed that 12% of the of the entire campus population arrived by bicycle. In 2005, just 6% of students rode bikes to campus. While bike use has gone up, the amount of people who drive alone to campus (23%) has dropped by half. 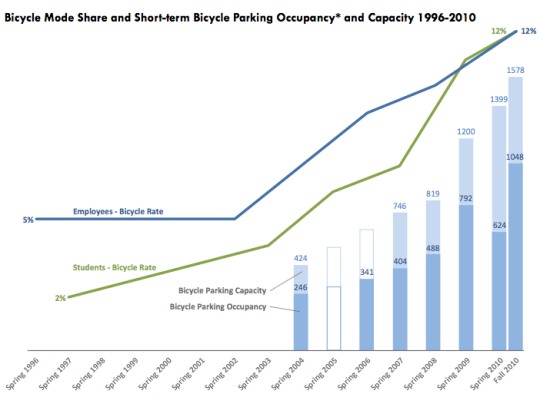 In a statement, League President Andy Clarke noted that, “Young people are driving less and riding more, and Portland State University has embraced that trend.”

“When you look at these numbers,” said Ian Stude, PSU’s transportation options manager in a BikePortland story in January 2011, “it’s not alternative transportation for us anymore.” Stude responded to their recent “gold” ranking by saying, “It took many years of work and a lot of investment in time and dollars… We want to support people making the choice to bicycle and make it as comfortable, easy and normal as possible.”

To fulfill that goal, PSU has added secure, covered bike parking facilities throughout campus. Stude is also active in the City’s Bicycle Advisory Committee where he represents the interests of people who bike to the campus.

Bright spots for bicycling at PSU include the city’s first parking-protected bikeway (installed as part of former Mayor Sam Adams’ “First 100 days” promises), the Bike Hub repair and retail shop, the Vike Bikes bike rental program, and they’ve even added bicycle commuting as a for-credit class. And while it wasn’t a part of their application to the League, the PSU Cycling Team won the Northwest Collegiate Cycling Conference Championship this year.

Then there’s the Bike2PSU Challenge a friendly competition that just launched today where riders log their trips to see who can ride the most through the month of May. So far 848 people have already registered. Last year, 1,100 riders participated and the combined for 125,000 miles biked. If you need some encouragement to sign up, Stude says they’re raffling off a new Linus bicycle each week.

— Learn more about cycling at PSU in our archives and check out the Bike Hub online.

Congratulations Ian, Clint, and all of the excellent people at Portland State University who worked hard for this achievement!

Congrats to PSU. Hopefully they keep improving and maybe cover some of the bike parking between all the buildings that line Broadway.

Yay PSU and everyone who is making this happen! proud to be a part of it

How did I miss the new PSU 2012 Transportation Update report coming out? Nice work Ian and team! The new format is gorgeous.

With both UO and OSU ranked as Silver BFUs, I won’t be surprised if either of them join PSU at Gold soon. The current rankings paint a strong picture of California and Oregon schools leading the way for the rest of the country.

Fun fact of the day: last time I checked, the immediate area near the Stanford campus has the highest bike commute mode share in the United States, with over 40% of residents biking to work.

I am curious, what is the average commute distance at Stanford?

Stanford doesn’t have much choice when distances around campus could easily be measured in miles. Driving isn’t practical, and a walk from the academic buildings to downtown Palo Alto takes forever.

I wish I owned a bike shop space half as nice looking as that covered parking area. sweet.

Well Done Ian and crew! Your hard work is paying off!