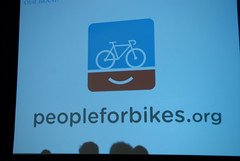 The National Bike Summit doesn’t officially kick off until tonight; but there’s already been several bits of news to leak out of D.C.

Check out the roundup below…

The League of American Bicyclists just announced their first-ever recipients of the new Bike Friendly University awards. Similar to their well-known Bike Friendly Community awards, the League created this program to recognize universities that go above and beyond in making their campuses comfortable for people who choose to ride a bike.

32 universities applied for the program and the League gave 20 of them an award. Stanford University in Palo Alto, CA garnered the only ‘Platinum’ designation, boasting a 21.7% bike commute mode share. Portland State University joined eight other (much larger) universities at the ‘Silver’ level. Back in January we detailed how PSU is encouraging staff and students to leave their cars at home.

“The application process has helped us identify our strengths and weaknesses in our efforts to transform PSU into the nation’s premiere university for bicycling.

In the coming months we will be implementing some exciting new programs along with suggestions from the League for improving our designation. I have no doubt that you will be hearing from us again soon with news of our rise to Gold, and eventually Platinum… so watch out Stanford!”

Just how powerful is this list of names? Last month Bikes Belong asked people on the list to email their members of Congress telling them how important bicycling was. 12,500 people sent emails in the first 24 hours. Bikes Belong thinks it, “must be a record for U.S. bike advocacy” and that it, “It proves the power (and the potential) of our movement.” 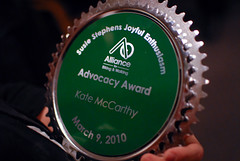 The awards haven’t been officially announced yet, but the BTA’s Rob Sadowsky leaked the news that Stephanie Routh, leader of local walking advocacy non-profit the Willamette Pedestrian Coalition is set to receive a national advocacy award. Routh has apparently been named the winner of the “Susie Stephens Joyful Enthusiasm Award” which will be handed out at a gala event tonight in Washington D.C..

Follow all of our National Bike Summit coverage here and stay in touch with the latest updates from Twitter on our special Summit widget page.

Silver? With all the bikes I see around here? Should be Gold Pressed Latinum! (ok, so some of the storm drain grates could use some tweeking… I’m already on it)

Joyful Enthusiasm? Yes! That absolutely describes Steph! And I can’t think of another advocate so deserving of recognition. Congrats to her!

The University of Oregon received a “silver” designation as well. Thank you past Bike Program Coordinator Briana Orr and current Coordinator Ted Sweeney (now at the National Bike Summit to receive the award!).

Also, great to hear that Bikes Belong is making some headway – I hope they’re able to maintain momentum and get the buzz going on a number of important issues this year.

Oh, Ely .
Thanks all. Very unexpected.