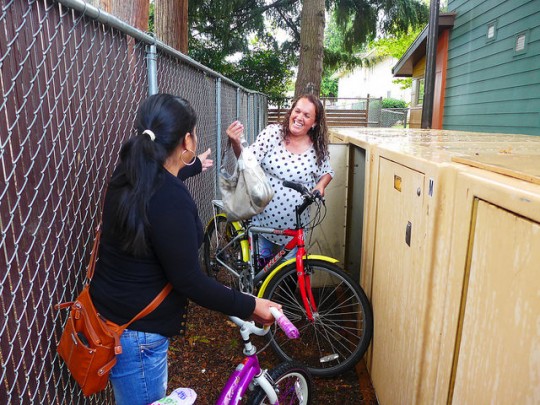 Velia Mendoza was one of the first users of the new lockers at Hacienda CDC. They were donated by the City of Portland but had sat empty since last year while residents and managers worked out an agreement for how to use them.
(Photo: Jaclyn Hoy for CCC)

After three years of meetings and negotiations, the group of Northeast Portland families who might be the city’s most dogged biking advocacy group got their goal Thursday: somewhere to park their families’ bikes.

The neighborhood bike club Andando en Bicicletas en Cully had chosen this as their first major advocacy campaign after a focus group of tenants of Hacienda CDC, led by the Community Cycling Center, found that secure bike parking was an overwhelmingly common barrier to biking there.

For years, bikes have been all over the place at the Clara Vista Town Homes on Northeast Killingsworth Street in Cully. But because there was so little on-site bike parking, residents have stored them in their homes… 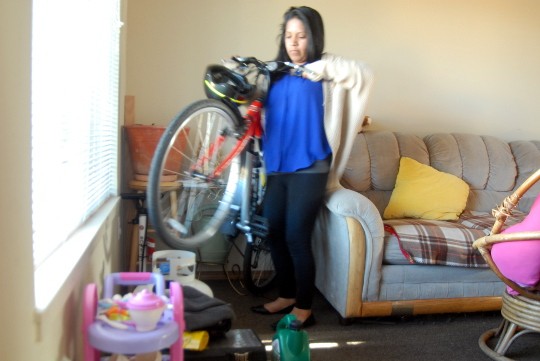 Ana Mendoza kept her bike behind the couch in the corner of her living room.
(Photos: M.Andersen/BikePortland unless noted)

…or on their porches. 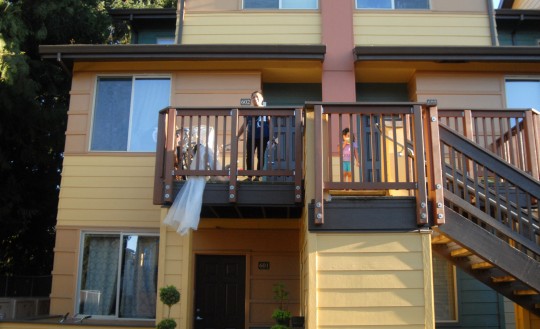 María de los Angeles Ku kept her family’s bikes under plastic on the porch, but they were vulnerable to theft.

Indoors, the bikes took up space and threatened to tip on small children.

One woman stored her family’s bikes in the kitchen, then moved them all into another room whenever it was time to cook. Other families used the porches outside their doors, but sometimes ran into trouble with property managers who said that storing things on the porch was against the development’s rules.

Three years ago, ABC’s members teamed up with staff of Hacienda and the CCC to find a better solution. Last year, they scored a big win when the City of Portland agreed to donate some unused bike lockers to Hacienda. But that still left the club without a system to access them. Who would get keys? Would they cost anything to use? Who would be liable for any damage?

For the last year, the lockers sat empty on the Clara Vista Town Homes property while Hacienda CDC and ABC worked out the details of an agreement. Last spring, CCC staffer Lale Santelices facilitated as ABC members drafted a code of conduct for using the lockers. 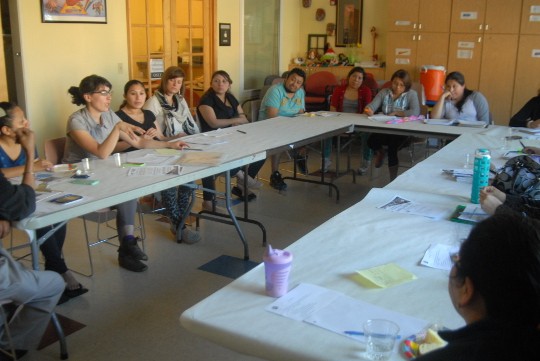 (Santelices’ many hours of support for ABC were funded in part by a set of government grants from the city, federal government and Metro. All of those grants have since been lost or cut, but the CCC has vowed to find new funding to keep the program going.)

With a few small changes, Hacienda agreed to ABC’s plan this summer. On Thursday, Hacienda asset manager Meg Guerra signed the documents and members distributed keys to the first 10 families who’ll be using the lockers. 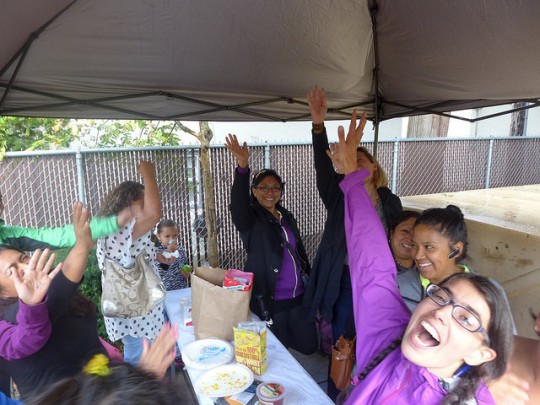 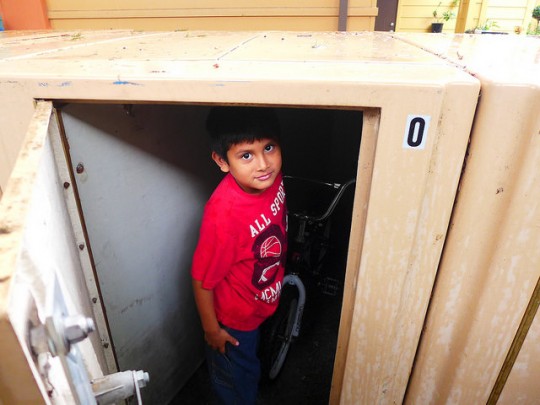 “It’s basic stuff, you know?” said Guerra, who came to her job late this summer and sealed the deal. “I’m very practical. … I don’t want to have empty storage.”

Guerra said she hopes Hacienda’s efforts will set an example for other affordable-housing projects around the city.

“It should be required for affordable housing, really,” Guerra said. “There’s a lot of people that use it.”

ABC members’ effort has already changed the practice within Hacienda. At a new Hacienda property down the block, ABC volunteers helped advise the development company on how and where to include bike parking. It’s now in place there, and being well-used: 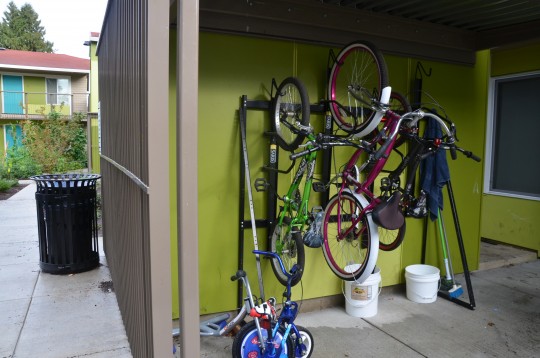 The 21 locker parking spaces that opened at Clara Vista Thursday are only some of the ones the city donated. And ABC members at other Hacienda properties are still hoping to find places to set lockers up.

At Hacienda’s Los Jardines property on 60th Avenue, ABC has suggested storing some bike lockers in the underground auto parking garage, which they say is almost never full: 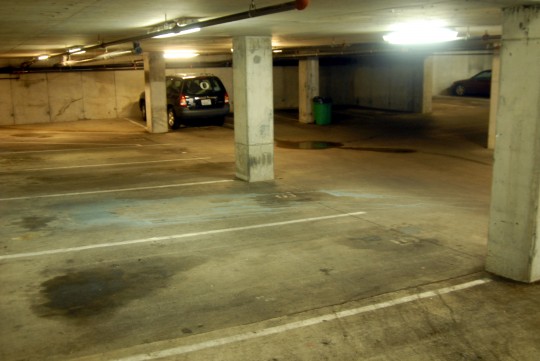 The oddly designed parking space in the left corner, in particular, seemed to them like a good candidate for a few lockers: 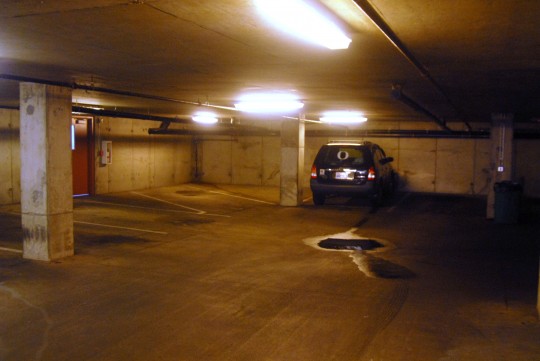 But even though the auto parking spaces aren’t being used, Hacienda has said that city code might prohibit removing any of them. On Thursday, Guerra said she hopes Hacienda will be able to work around any such rule.

“We can make a case,” she said. “Especially if we can show that we aren’t using the spaces, I think the city would go for that.”

Congrats to ABC, Hacienda, the Community Cycling Center and everyone else involved. With advocates and partners like these, hopefully this is just one of many victories that’ll improve riding bicycles in Cully. 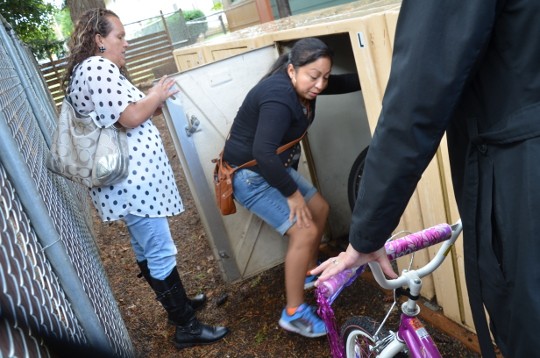 Awesome! Same kind of locker as I use at work.

Maybe I should forward this to the landlords of our courtyard. It’s a great idea, and much better than the “secure” bike storage offered at the luxe new apartments in town.

“It should be required for affordable housing, really”.

The good news is that it is now—at least for new construction—and not just for affordable housing. It looks like the Clara Vista Town Homes were permitted in 2004, at a time when the City only required 1 bike storage space for every 4 units. Even that could be waived if bikes could be stored in the unit, but there was no requirement to show where in the unit the bike could be stored. The practical effect is that there were no bike parking minimums.

Since 2009 the City has required 1.1 bike parking spaces per unit, or 1.5 in the Central City. These have to be located in a secure area, or if located in the unit the permit drawings have show where a bike would actually be located.

As I work to upgrade the racks here for greater bike parking capacity, I look for opportunities to reuse/donate the old wave racks. In the past, with help from the city and the property manager where the racks were previously installed, we’ve donated racks to a local elementary school. If Hacienda or CDC is interested in more bike parking (no lockers at the moment, but potentially lots of wave racks), I’d be interested in talking to them.

Great report. It’s gratifying to see good things happening in Cully – and to see the neighbors there working together to get what they need and want.

that should not take years of advocacy

So…did I read this right? There is a massive parking garage underneath. .but the bikes have to park outside in the weeds and trash…on a sketchy side yard?

If that’s right…how ridiculous. Those bike lockers should be right next to the car park underneath.

Looks like this was led by women. Nice work ladies!